For the RWD SR20DET cars! Sponsored by Wiring Specialties.
Locked
2 posts • Page 1 of 1

Welcome to the RWD SR20DET forum. This FAQ is designed to help introduce you to the basics of the SR20DET and learn some common upgrade paths as well as answer some of your nagging questions.

The SR20DET is a 2.0 litre, rear wheel drive (RWD) 4 cylinder motor found in the Nissan Silvia and Nissan 180SX starting in 1991 and leaving production in 2002 in varying forms over the years. It is a common engine replacement for the US 240SX as it is a direct bolt in replacement. Only minor wiring needs to be done to make the motor work.

The motor went through minor updates throughout the years when Nissan would release a new Silvia chassis. These are commonly referred to as the Redtop, Blacktop, S14 Blacktop, and S15 Blacktop

The S14/S15 Blacktops received upgraded turbos and Variable Valve Timing (VVT) for the intake cam. The S15 also received a different Mass AirFlow Meter (MAF) and 444CC injectors. Both received Garrett T-28 turbos, but the S15’s T-28 was further upgraded from the S14’s.

This chart was copied from Sport Compact Car's website

The third generation received a more refined T-28 turbo. The compressor was the same BCI-1 wheel put inside a T04B housing, but the turbine received an upgraded inconel wheel and had a cast divider wall in the wastegate discharge path to help aid spool characteristics.

This turbo is now referred to by Garrett as the upgraded GT2560R to follow with their current identification system.

An inconel wheel is a Titanium Aluminum (TiAl) alloy turbine wheel that is used as a replacement for lightweight Nickel based turbine wheels. Traditional metal wheels tend to fail in high temperature exhaust gasses, but with the introduction of the TiAl turbine wheel, it is possible to have a lightweight wheel that can withstand higher exhaust temperatures.
Referrenced from ScienceDirect

One thing to note about Garrett turbos is that they now all share the GT nomenclature, where as before GT was thought to refer to ball bearing turbos. Breaking down the S15 T28 code of GT2560R follows like this:
GT25 - refers to the turbine wheel frame (which for this frame size is 53.0mm)
60 - refers to compressor wheel exducer diameter (big end), which is 60.0mm in this case
R - denotes a ball bearing center cartridge. You will sometimes see an S after the R, which denotes further upgrades that require additional designation.

Differences Between FWD and RWD
FWD NA motors have 9.5:1 C/R
Physical dimensions are different
Distributor is ran off the rear of the exhaust cam
Intake collects from the opposite direction of the RWD intake
Clutch is of smaller diameter (215mm 18spline)

Basic Maintenance Items
-Spark Plugs: NGK Iridium BKR6EIX Gapped to .036” for stock performance. Commonly gapped down to .032” for higher boost applications
-Oil Filter: Any that fit a Sentra SE-R with an SR20DE.

Oil
The SR20DET holds about 3.5 quarts of oil. Upgraded oil pans will sometimes add an extra quart to that capacity.

Below is the recommended oil weight chart. This chart bases oil weight on the ambient temperature. 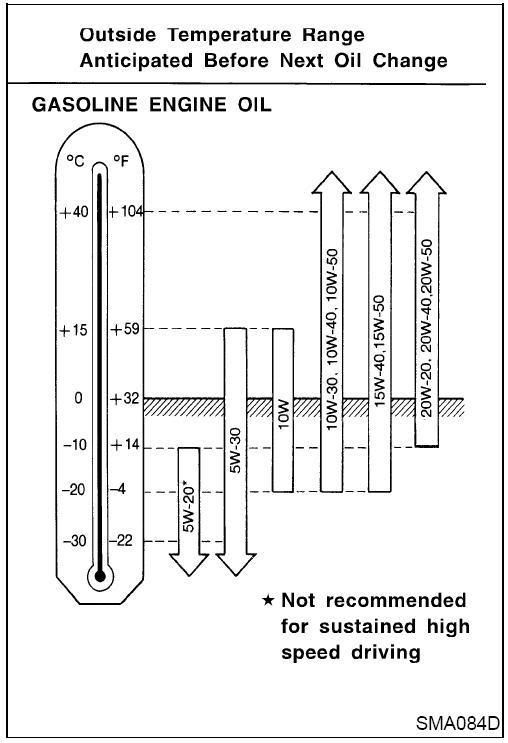 Typically, 15w50 is recommended by some mechanics for summer and 10w30 for winter.

Synthetic oils are the best type for turbo motors, as they resist thermal breakdown longer and better than conventional oil. On turbo motors, the oil sees extra heat transfer from lubricating the turbo's center shaft.

Transmission
The S13 and S14 SR transmissions are identical to the American counterpart mated to the KA24E/DE. The primary differences are the bellhousing bolt pattern and 5th gear.

The S15 SR20DET is mated to a 6 speed gearbox. The primary differences on this gear box are still the bellhousing bolt pattern as well as the lack of a speed sensor. The speed sensor for these transmissions were located on the differential housing.

NISMO released an updated version of the 6 speed gearbox that uses reinforced gears and has the hole for the speed sensor as well.

Fuel Pressure Regulators (FPR) are to be set to 43.5 psi with the vacuum source hose unplugged from it. With the hose plugged in, the regulator should read 36 psi. Aftermarket fuel pumps tend to force an old, tired regulator to run higher pressure. A Walbro 255 lph fuel pump has been shown to consistently run stock FPRs at 43 psi with their vacuum sources plugged in. This will result in a slightly rich condition, which doesn’t affect drivability or performance. It does seem to adversely affect injector life, however.

Swap Basics
Swapping an S13 SR into an S13 chassis is about as simple as it gets. The motor is a direct bolt in, the motormounts are identical between the KA24 and SR20, and the driveshafts are interchangable.

Wiring wise, all that is needed to be done is to repin the big plug next to the battery that connects the EFI harness to the chassis, extend the O2 and MAF signal wires, and rewire a few wires for the ECU to dash plug. Be sure to check FRSport's Wiring FAQ for a detailed guide to wiring the motor in properly.

Be sure to remove the heatshield from the turbo and the AIV tube as both tend to make contact with the US steering column. Also, an SR downpipe will be needed but it will bolt to the US catalytic converter.

Safe limits of the T-25 Turbo
The T-25 turbo shouldn't be ran above a 13 psi setting if using an aftermarket boost controller. While, 14 psi is attainable, it is barely within the compressor effeciency range of the turbo and will decrease the life expectancy. 15 psi puts the compressor outside of its effeciency range and you risk severe damage to the turbo.

Taking an old rule of 1 psi of boost is equal to about 8 horse power, at 13 psi, the T-25 should be producing a ballpark figure of 253 horse power.

Again, that is a ballpark estimate as all turbos and motors are different. Also, this should show you that at 13 psi, the entire fuel management system is maxed and going beyond 13 psi could seriously damage the motor as well as the turbo.

Safe Limits of Stock SR20DET
Many people ask what power levels a stock block SR20 can handle. The internals have been known to support 400 whp reliably. However, that is dependent on your fuel management. Proper supporting mods must be done to the fuel system to support this number, or you will melt pistons. The pistons are the first part of the motor to fail internally. They tend to overheat and either burn holes through them, or their ringlands crack and fall apart.

Reports of rod failure have been practically non-existant for 2 reasons. Most people upgrade their rods when they rebuild, so it's rare to find someone stress testing rods with an aftermarket piston. The other reason is that SR rods are beefy, and short. Shorter rods don't have the same leverage of force placed on them as a longer rod, and are less likely to bend. The rod bolts Nissan uses, are of good quality, and have yet to show fatigue at high RPM leading to spun bearings.

The crank has yet to be proven as a weak point, and it's rare to see someone crack or snap one due to power output.

Here is a list of previously stickied or just plain informative pages where you can find the answer to alot of questions commonly asked in the SR forum.

Where to Buy Engines

DIY - SR Cruise Control FAQ - thanks to Elvis240sx for the write up!

How Turbochargers Work from HowStuffWorks.com

How to hard-wire your fuel pump by idahotuner