Recently there has been some discussion over on fb and quite a few email being sent back and forth between 320 enthusiasts. So let's shed some light and share some knowledge on how to determine what year Datsun 320 you think you have.

A special thank to Ted Heaton up in the rainy Northwest for sharing his Datsun 320 information and history with us here in the NiCo 320 Forum.

Before we get started, you might want to take a look, read, jot down a few notes, and copy/paste some vital information over to your computer before saving these three websites to your favorites -

Lots of good information here and we will re-visit these websites of the next couple of post.

Well the answer is quite easy - Its whatever year the title issued to you by your State says it is. Sorry for the legal answer and I don't think you are going to be able to change it without going through lots of headaches and few dead presidents and a postmaster general.

However, that is some what of a loaded question as many Datsun 320 came off the assembly line in Yokohama at different time of the year with parts or specific features from a previous year. The Datsun Dealer and State DMVs simply went with the Year of Model line of the Vehicle Data Plate.

The frame may have been inscribed as a '64, received '64 specific features and still titled a '65. So we will look at how we think this might have happened as well as look at the specific features for each year, from 1962 up to the end of production 1965 models that were assembled along with the new bodied 520s and their single headlights. 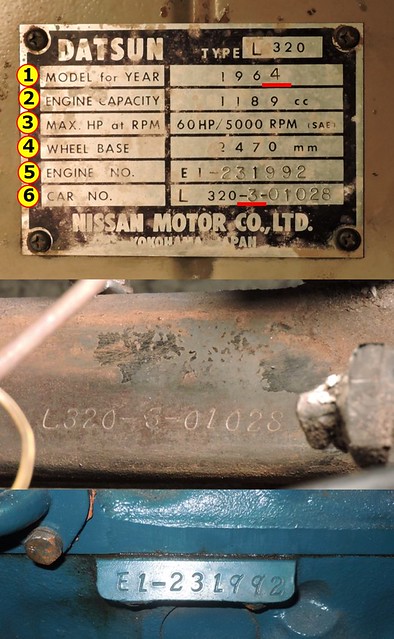 Okay, from the top-

The very first line is L-320. The L is for Left hand drive and the export market. I believe the Right-Hand drive were simply marked 320. However, the P mean "Passenger", but do not remember where I saw this.
- Also note that the EarlyDatsun site from Australia rarely references the "L" as most vehicle DownUnder and to the Pacific Rim countries where right-hand drive.

Line 1 is the four digit Model Year of the 320. And what your State's DMV, Revenue and Law Enforcement care about for registration purpose.
- Note that the Model Year in Line 1 may or may not (more likely the latter) does not match the 4th digit in Line 6 or the 4th digit in the frame inscription. That's because the vehicle was more than likely produced in 1963 and might, I say might, have been stamped 1964 in the Model Year for sales purpose due to the transit time from the factory to port, ocean travel time, off load at a US port and then final transit time to a dealers lot for sale. This time alone could have taken up to 3-4 months. So why not mark it as the next years Model Year. I'd bet too that the same boat that brought over a '64 320 probably had a few left over '63s on it or early '65s depending on when it set sail for the West Coast.

Line 5 - Engine Number. Well get into this in a later Post but there were four different engines or MKs for the E1. This is explained in the first two websites

Line - 6 Car No. Notice how this number is an exact match of the chassis inscription.
L - 320 - 3 - 01028
L = Left hand drive
320 = vehicle model
3 = production year, so could be a 2, 3, or 4. Do not think '65 models had this digit in the serial number
01028 = production sequence
"Letter" following the production sequence. I have seen a few with a letter at the end of the serial number. This could be a code for a calendar month of production or it could denote an assembly line. Many times too you will see this letter almost off of the Data Plate over in the black painted area and yes this has caused some problems at the DMV.
Chassis Inscription - this is located on the top of the right/passenger frame member behind the top A-Arm suspension assembly and by the clutch slave cylinder line bracket. You might have to do a little scrubbing and cleaning but it should be here. It might be easier to read, once clean, if you use a piece of chalk to fill the inscription and then wipe clean with a clean dry towel.


Okay, take a minute or two and look at the above data plate and notice the lines and information that is printed versus stamped. Pretty much the all the information is printed except the last digit on the year, engine and chassis serial number. 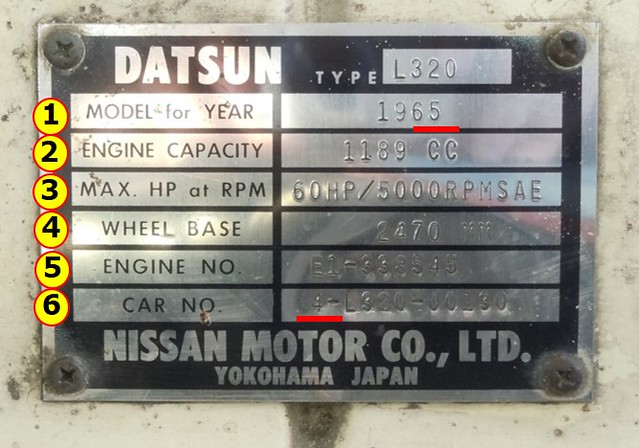 All the above information is stamped! Not one line is printed. There are a few 320 out there with data plates like this. There is nothing tricky or shadey here. Chances are some dealership changed the data plate on an late arriving or unsold 1964 model. From what I gather this was quite legal or maybe just not that illegal back in the '60s and early '70s. On this particular 320 the chassis and data plate match, but not the engine serial number. Which begs the question of what happen to the original motor? Did the dealership record the incorrect serial number of the engine on the data plate or was the original engine replaced? So we will revisit this again when we look at the engine serial numbers.

Okay that's about it for installment one of What year is my 320.

Next we will take a look, literally as I take some pics, of the four different E1 MK engines and what makes them different. I might need some help correctly pointing out the oil pressure relief valve located on the oil filter housing on the E1 MK IV. To me the MK III and MK IV look the same or maybe I have the same oil filter housing on the E1 MK III.

Don't worry we will cover the grills and turn signals and then get into some of the idiosyncrasies of each model year that are not listed in the above websites.