I was browsing wiring specialties page the other day and came across an upgrade option to ditch the standard igniter and replace the coils with r35 coils. I’m just wondering if anyone has done this and was curious if it was a straight drop in procedure or if there was anything that needed to be tuned to get the correct spark timing/dwell.

I haven't done it, but I'm STRONGLY considering it. I think I'm going to get rid of my old SDS this year and upgrade to a Haltech. To be clear though, wiring specalties is just selling you the Platinum Racing Products kit.
[/url]https://platinumracingproductsusa.com/p ... d135&_ss=r[/url]

That company actually has a bunch of great stuff for the CA! They have a cam and a crank trigger kit as well. My plan is to use their trigger kits and R35 coil kit with a Haltech.
Top

Stock computer sounds like
$770 seem steep for only a coi conversion kit to me
Aren't there a few online writeups going with varioius 'smart' coil options and eliminating CA18 oem ignitor ?

Should be a plus replacing the aging electronics and wiring
Top

The conversion kit comes with R35 coils, adapter harness, custom length coil standoff (the part that connects the coil to the plug), and the adapter plate that allows the coils to be bolted down properly. As with everything, I'm sure you could DIY for less, but it won't look as good. And I'm not sure how you'd created the coil standoff.

Not sure where you got that they don't make a cam sensor bracket. It's right on their website;
https://platinumracingproductsusa.com/p ... r-kit-only

I think a lot of it has to do with cost and current power levels. The comparative cost of electroncics has come down while reliability and capability has gone up. Also, with current engine tuning, fuel injector, ignition coil, and turbo technology, power levels for street cars have gotten pretty insane. I remember 20 years ago when I first got into all of this, 300hp was a big deal. Now you're nothing special making 400hp. And it used to be that to make 400hp, it would have sucked on the street. Now you can make that and still have a reasonably streetable engine.
Top


Not sure where you got that they don't make a cam sensor bracket. It's right on their website

i don't c a CAS bracket. Link below says it right there in red letters, under 2nd cam photo
https://platinumracingproductsusa.com/p ... rigger-kit


Not sure where you got that they don't make a cam sensor bracket. It's right on their website

i don't c a CAS bracket. Link below says it right there in red letters, under 2nd cam photo
https://platinumracingproductsusa.com/p ... rigger-kit

Those directions must be old. They make a cam trigger kit now;
https://platinumracingproductsusa.com/p ... dfb2&_ss=r

I agree that batch fired works and can make good power. But it' has it's pro's and the only con is cost. Technically, you don't need EFI at all. I've seen plenty of V8's make good power on blow through carbs and distributors. To each their own!
Top

Spending time around cousins' mechanic shop, made me not want coil-on-plug. He replaces a tremendous amount of coils
Never thought that was a happy place for a coil..... or they must be running a huge scam. Like an industry in itself
Stock CA18 coils look like lifetime units by comparison

Coil pack & plug wire can outlast a vehicle and perform second to none.... my GN and DSM for example
I actually saved a good set of low milage CA18 coils, to custom mount and run plug wires, on my CA18
Also stumbled on an old datsun who "lifted" the whole CA18 electronics to run his SOHC - did exactly that with the CA stock coils


Technically, you don't need EFI at all. I've seen plenty of V8's make good power on blow through carbs and distributors. To each their own!

Negative. You NEED efi, to attain the level of the DSM example.... or like Dee 5-600hp CA18
A comparable stock 6.0 LS would have to make 1800hp, move a 9000 pound vehicle to lo 10s with the same chracteristics and economy
Never see it. Won't come close with EFI, let alone a carb.


I agree that batch fired works and can make good power. But it' has it's pro's and the only con is cost.

If u replaced all the electronics on the DSM example, added cam & crank trigger & COP, then retune.
I doubt any improvements would even register using lab equipment. Worth the effort/expense ? Yep, to each their own

Why would the RB and the CA use a different bracket? They use the exact same CAS, the only difference being the disc on the inside of it. It should work on the VG as well. It's all the same sensor, just different optical discs.

As long as you're not being limited in some way by a wasted spark setup, then no, converting to a COP system won't gain anything. But if you're having to reduce the plug gap at high power/boost levels or your having issues with the spark breaking up at high RPM's, then a COP system can fix those issues. I'm not saying a wasted spark system is bad, but it CAN have it's limitations.

As far as reliability goes, I think we'll see that COP coils have come a long way. The R35 and VAG coils are seeing A LOT of aftermarket use and durability isn't proving to be an issue for them. But time will tell.

Oh, I'm not saying that you can't make more power with EFI vs. Carb. I totally agree. My point was that just because it can be done that way, doesn't mean you're not leaving power on the table. I've personally had to close down the spark gap on my wasted spark system (GM based coils) because at the power levels I was at, there wasn't enough dwell time at high RPM's to fully charge the coils and the spark would get weak and blow out. Gapping the plugs down "fixed" the problem, but it's well known that the larger the gap the better the combustion burn efficiency is. Switching to sequential fire ignition in that situation will usually allow for keeping the large spark gap and not having it break down at high RPM/Boost levels... But again, if you're running a normal gap, and not having spark issues with wasted spark, then no, nothing will be gained from COP.
Top

I'm pretty sure dash is talking about replacing the timing belt cover with a bracket similar to the old Growly one which I have. 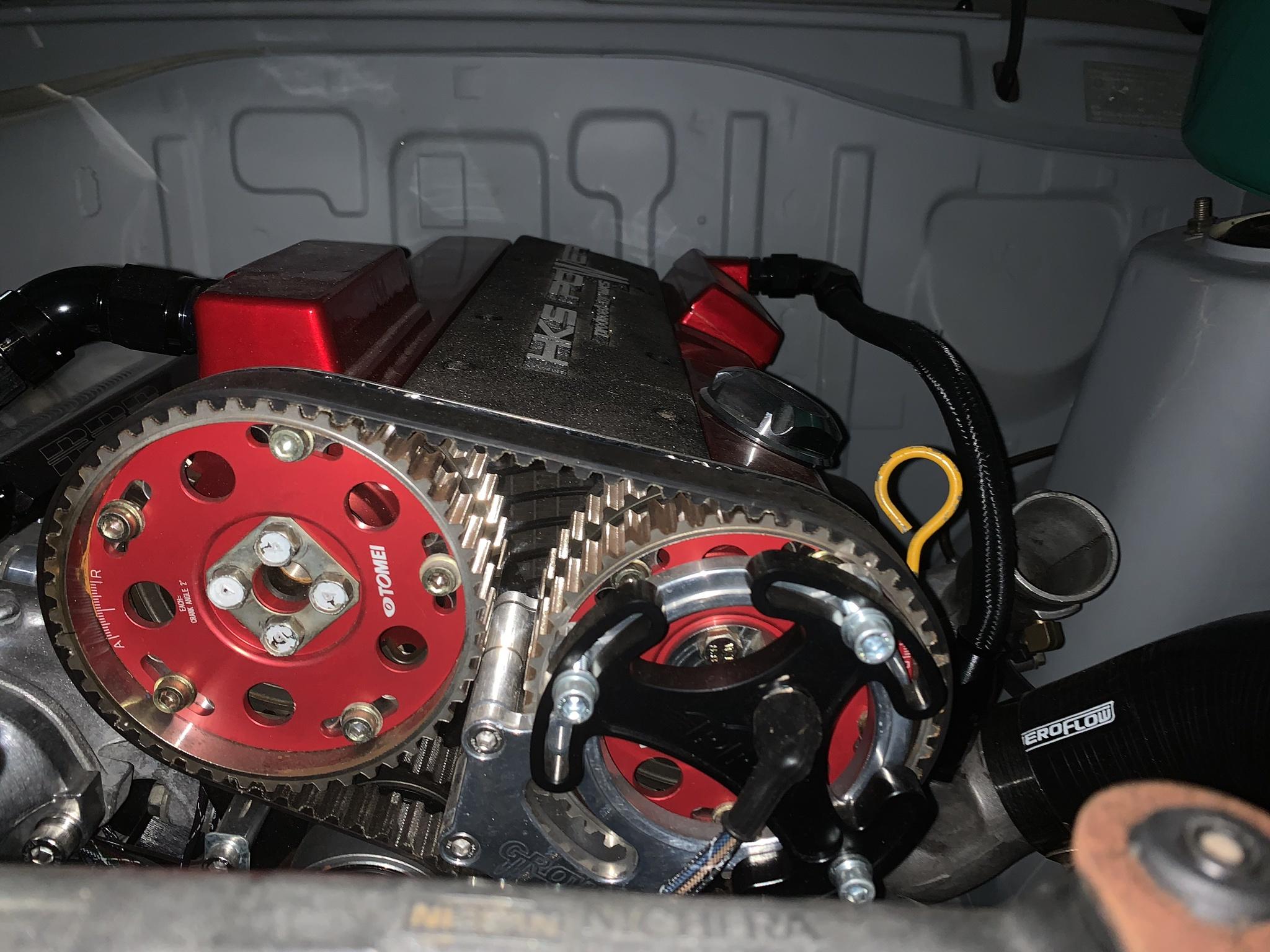 My car is getting the last of the wiring done now and hopefully off for a tune in a fortnight. I went with PRPs trigger kit for crank and cam and billet coil kits r35 coil kit which apparently uses non genuine coils. https://performancepartsecus.com/collec ... t-coil-kit. My main reason for choosing this kit over the PRP one is that all of the coils are bolted down whereas the PRP kit only bolts 3 coils to the bracket, they have since added a clip that holds the remaining coil to the bracket. 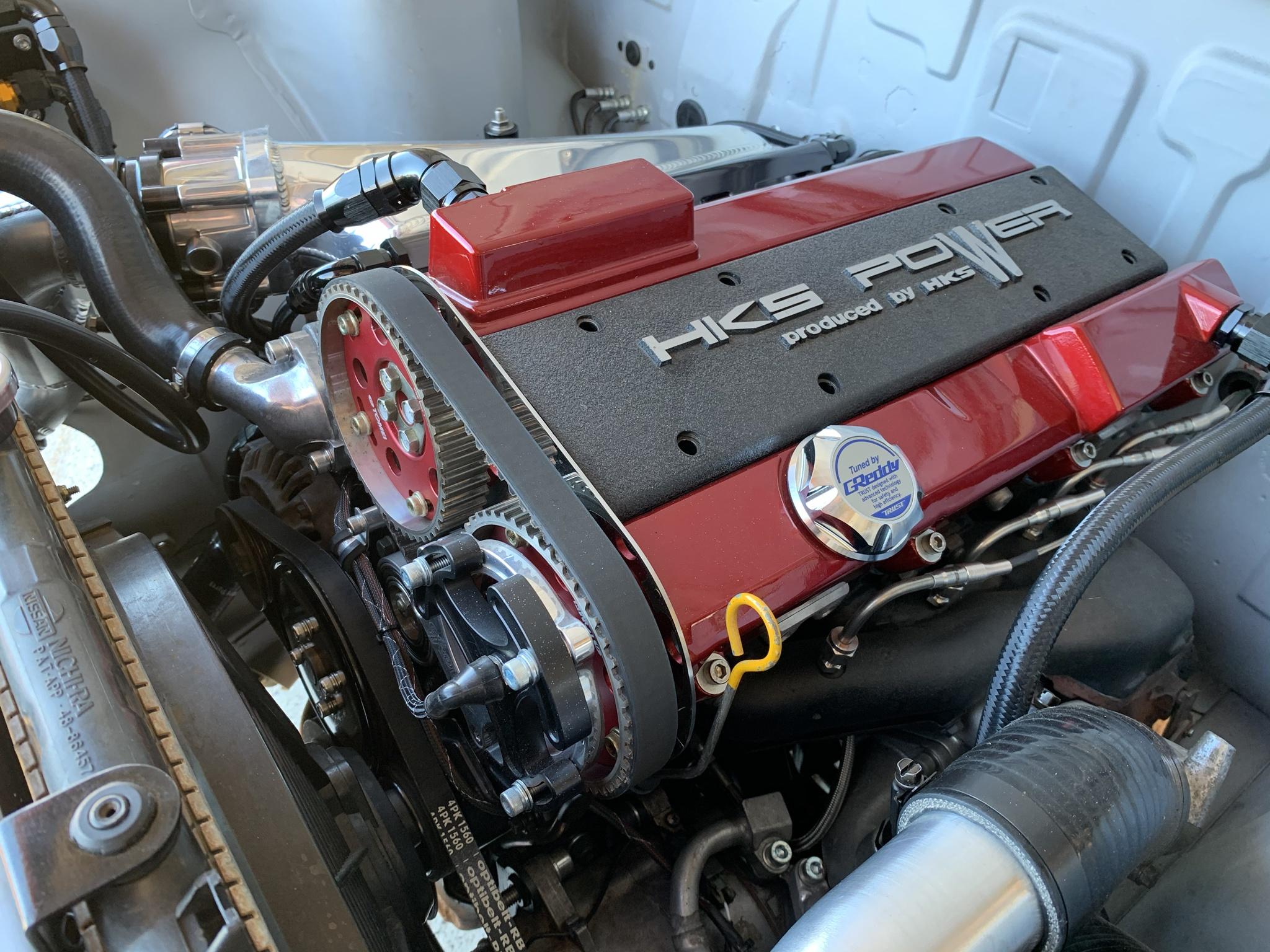 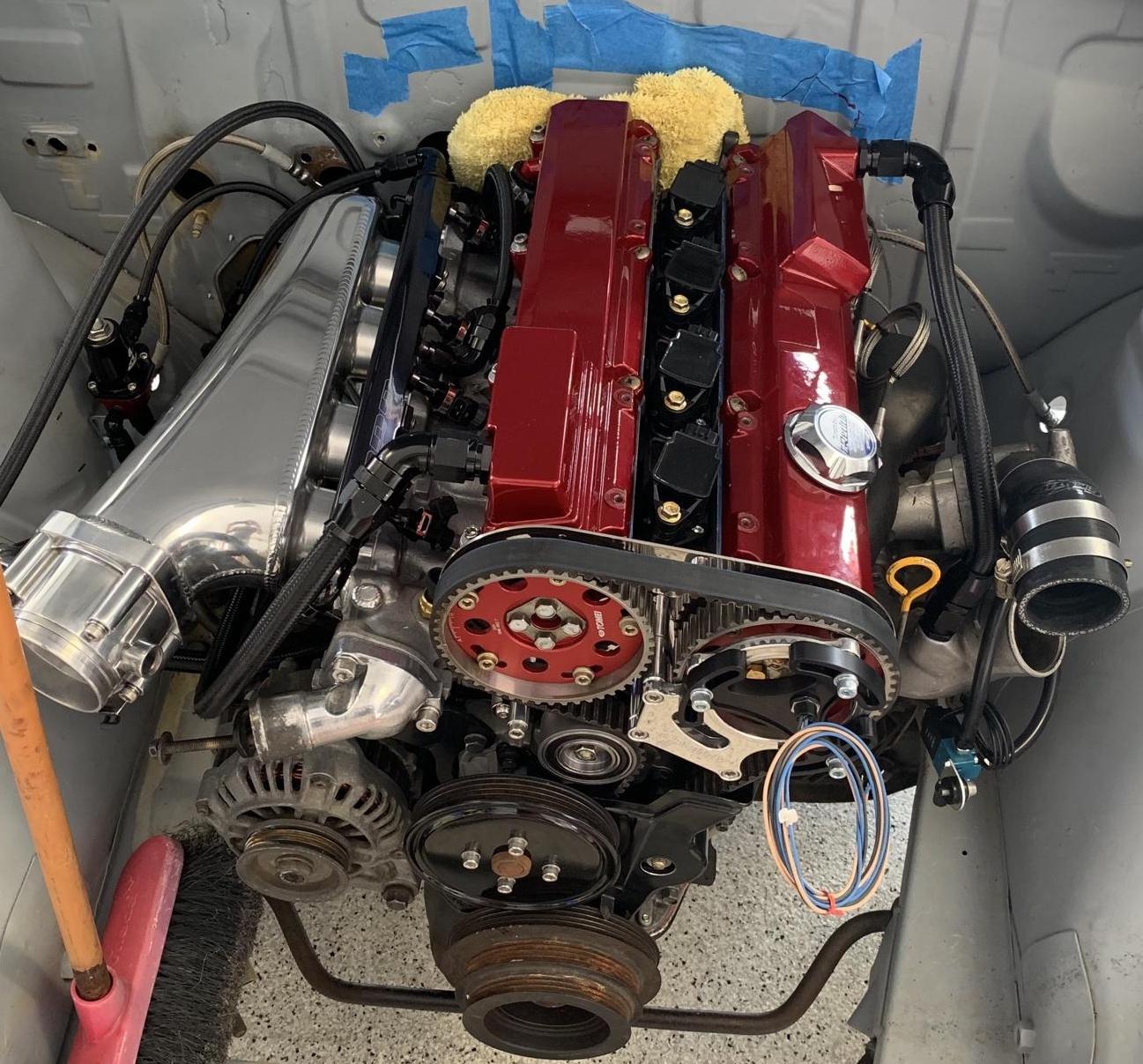 1200 when you get a chance, share details on your project. Looks GREAT, with some nice goodies!
Are those pyros in each exhaust port ?
Yes, the Growly CAS bracket I mentioned in my 1st post

Float,
I think those GM coils originate from sub 6000rpm motors. Could be a factor, dunno
A corolla clubmember ran standalone on his screw-supercharged 4AGZE.
Said stock GZE coils were at their limit ~18psi, so his 'solution'.... convert to coil-on-plug
I sent him a link of Wills' monster toyota 4AG(1.6L) from SDSefi project page
Big az T4 @35psi, tiresmoke on dyno, needed 3 adults in the hatch. Shifts past 10,000rpm! 550+ hp before head lift
SDS management with stock 1990 GZE factory coilpack
Top

I've been running an SDS for about 15 years. The GM based coils that come with the SDS started blowing out around 450hp and 7500 rpm. I gapped the plugs down and that fixed it for the time being, but it didn't idle quite as well and the off-boost timing had to be advanced. I switched to VAG coils and gapped the plugs back up and that worked a bit better. I don't like the way the VAG coils look on the CA though so I'm probably going to switch to the R35 coils. Anyway, like I said, I know wasted spark works, but it CAN be limited. In that build you mentioned, I wonder what they've gapped the plugs to to make that work. You can run "weak" coils with a small plug gap and play with the ignition timing and get it to work. I also wonder what fuel they were running. I'm running E85 and it seems to like more plug gap to work well. You already have to run more advance with E85, so running a tighter plug gap only makes that issue worse.
Top

Thanks Dash, yeah they are EGT - exhaust temp sensors. I don't need them as the engine is completely stock inside and unopened but I had the exhaust manifold off and thought i might as well get it ready for later. Anyhow, I pick the car up from the wiring guy on Friday and corrected a mechanical timing issue over the weekend. The engine is running pretty nicely on a base map on aa Haltech Elite 1500. Main items are; plazmaman upper manifold with Bosch DBW 68mm TB, S15 T28 BB turbo (I have a EFR7163 to go on later), 1650cc Bosch injectors, oil cooler is based on Sebtrab core, Greddy filter relocation thermostat housing and growly oil block adaptor, R35 ignition coils and a heap of sensors. I pushed the tune back a few months as I have a minor oil leak on the oil cooler fittings and have ordered higher quality items to replace them.

I'd imagine a different manifold for the EFR


Float,
I'm wondering if boost_boy ever hit any coil pack roadblocks in his hi power builds..... he been SDS like forever
Top

I'm not sure if he's still in the game, but back in the day, good COP just weren't really available. I think he had a MSD CDI on his, but don't quote me on that.
Top
Post Reply
14 posts • Page 1 of 1