ONLY for ADVANCED technical discussion about the 240sx!
Post Reply
3 posts • Page 1 of 1

I have rebuilt a 1996 S14 KA24DE, and I am going to put my KA into my 1990 S13 hatch. I've read online, (trust me I've been researching a lot recently) and a lot of people are using the S13 KA engine wiring harness on the S14 KA, which requires to change your manifold and distributor. I already have an S14 ECU & S14 wiring harness, and I want to make this work with the S14 wiring harness which I know is possible.

I've only seen people do this once or twice, the most helpful thread was this thread: (even though he was putting an S14 SR into an S13, it was basically the same scenario)
https://www.nicoclub.com/archives/s14-s ... -swap.html

Now, getting power to the S13 dash and getting the tach to work and speedo to work sounds like cake to me, just buy the corresponding dash plug and splice the wires out of the S14 F3 dash plug which correspond to the right pinout- and voila. Dash seems really easy to wire up.

Well, my problem is getting power to the ECU itself. I cannot find information on how the S14 ECU gets power, I believe it's through the dash? Let me know on that. Yet I do understand that the S13 ECU gets power through the engine harness from 2 plugs near the battery, an 8 pin gray plug and 8 pin brown plug. I bought a bunch of wire and bought 2 sets of 8 pin connectors (male & female), and I'm planning on cutting the two gray and brown plugs and putting my own 8 pin plugs on there. (Since I cannot find the corresponding plugs online)

I was then planning on extending wires from the S14 F3 dash plug which correspond to the pins on the gray & brown plugs, and just connecting them. But then of course, I wouldn't be using all the pins since I know things are different.

From looking at the S14 SR in an S13 guide I linked, it seems that the person followed those wires which connect to the gray & brown plug back to the interior and just cut those wires, and soldered the corresponding wires from the S14 F3 dash plug onto those. These are the given instructions:

Then there's these two, which I only have one B/Y wire coming out of my F3 dash plug:

I'm also pretty confused with one thing, how come the pin for the actual ECU Power on the gray plug isn't being used or soldered to any wire? Is it just going to run off of the backup power pin?

How should I manage on wiring this up? I really want to get this car running, thank you for any help! I've been researching for so long and I'm just stuck on this! I want to get it done.

I've performed this swap on one of my old hatches. Most people use the S13 components because its honestly just 1000x easier. There are a fair amount of differences between the S13 and S14 components. I've heard of people running their KA off of SR and DSM ECU and wiring harnesses too but you're going to be putting the time in yourself to dig through the wiring diagrams and sort it out yourself because you're determined to be unique. If you're dead set so be it, The FSMs have all of the info you need to convert wiring. http://www.nicoclub.com/archives/use-ni ... abase.html 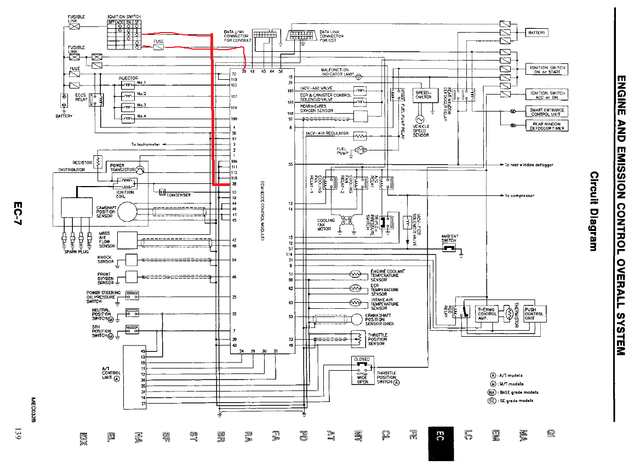 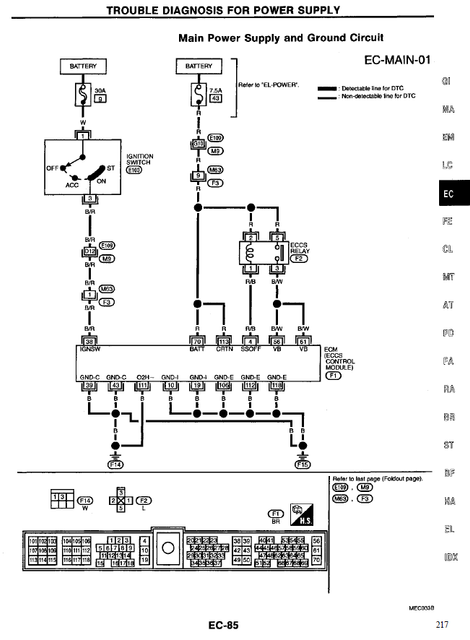 There is your S14 ECU power circuit. And you're not going to be able to use the SR wiring diagrams to wire your KA so just chuck that stuff right now. You are going to have to sit down with the S13 FSM for your car and the S14 EC section for your wiring harness and align the pinouts to where everything interfaces with the chassis.
Top

NukeKS14 wrote: ↑
Sat Jan 09, 2021 8:13 am
And you're not going to be able to use the SR wiring diagrams to wire your KA so just chuck that stuff right now. You are going to have to sit down with the S13 FSM for your car and the S14 EC section for your wiring harness and align the pinouts to where everything interfaces with the chassis.

Thank you for your input!

But, as far as specific wires from my F3 dash plug being soldered/connected onto some of the wires on the gray or brown plug goes, is this all I technically have to do?:

If that's all I really have to do, that doesn't seem too hard. I'm gonna print out the S13 harness section, already have my S14 harness section printed out.

Also, I'm assuming it's okay to run the ECU off of the backup power?