Read about NICOclub events of the past.
Post Reply
20 posts • Page 1 of 1

Here are some rolling shots from Sunday:

Hey everybody! Had a blast. Here are some pictures. There were not that many, hard to shoot and drive.

Biltmore Estate. WOW is all I have to say.

Betzy at lookout on Monday.

Colors were displayed...Nico and put-put..

taking a quick 5 minute rest after running the dragon.

Out the window shot...Blue Ridge Parkway


I drove the Dragon on Monday morning with Daryl. It was raining, but not too bad.
I then I headed up to Knoxville and the skies opened up and it started to pour. Everything pretty well turned to poo after that. Visibility was next to nothing as my front and back window defog was not installed. The windows fogged over, except for where the rain was pouring in on me around the window seal. I kept wiping the window to see out, but had no way of reaching the rear window. Maxspeed 30MPH. Torrential rain. I ended up with about 1/4 inch of water on the floor. Then... the engine started acting up, cutting out and bogging down. I pulled into a Shell station and poked around trying to find out WTF was going on. I noted that the electric fan was running, when it should have died with the ignition. I pulled the relay and killed it. I decided to camp out for the night and let the weather pass. That way I could let things dry out and think about what to do.

Long story short version is that there were a few un-used holes in the fender close to the electric fan relay. When I was driving through standing water, the water was spraying up and into the control and shorting out the box, which also had the ignition circuit wire going to it to enable the fan only while running. I duct taped the holes shut and that fixed the problem. Good thing I had the essentials.

Made it home this afternoon. Beer time!

Hey Gordon, check your facebook. I posted a link to a few pics that were taken of your car on the dragon
Top

tigersharkdude wrote:Hey Gordon, check your facebook. I posted a link to a few pics that were taken of your car on the dragon

I checked them out. Pretty cool. Thanks for the heads up.
Top

These are the only pics I really took on the trip:

I sure wanted to ride with ya Chris but didn't get to. I hope I have the pleasure of meeting you in person next year.
Keep the music coming I like what I am hearing. Here are my pics in video format of my journey over the weekend.
Total trip 659.miles mostly done on Saturday and Sunday.

All who made it,
It was nice to meet some of the NICO peeps this year=WIN
Although it was not as organized in the lodging aspect of things
Fontana could of done better in helping us get NICO ROW like is was in 2010=FAIL
I did see for the most part everyone trying their best to stick together=WIN
Although I had family plans that weekend intertwined it made it hard for me to make most of the itinerary
that was planned for us my apologies.Thanks to Torry and Tunerz store for sponsoring such a grand atmosphere
for us Nissan and Infiniti heads=WIN
Glad my prayers were answered that no one was hurt,wrecked,and damaged.=WIN
I hope that I can give more attention to this next year and help sponsor 2012's event in some way
finances willing.Here is a snipet of pics and video taken over the weekend.
Thank you Andy for riding with us it was a great drive in.Til next year brothers and sisters....... [youtube]http://www.youtube.com/watch?v=fXHfY7NhCGc[/youtube]
Top

Moved my photos from the other thread.

Great pics at the dam Chris and Andy! Wish I would have stopped by there.

Short video of one of our runs from Cherohala Skyway....

Here are some pics from saturday. I didnt take that many pics

Ugh need moar low. This thing looks like a monster truck. especially with the hill exaggerating it.

Peep murderer!!!! Sure smash one and make the others look upon to see their fate.
Top

Those were very nic3 pics Brad, Thanks for sharing
Top

Thanks NICO for a great Labor Day weekend! My wife and I met some really awesome people who we hope to see again soon. Shout out to the Louisville crew and Tunerz Store, LLC. It was cool to find out how widespread the NICO family is!
Here are some of my pics from SAT and SUN.

I'm still trying to load my video of Deans GT-R on the Cherohala Skyway. Maybe tomorrow

Hey guys here is my contribution, I have many more pics. I still need to upload. Enjoyed meeting all the cool people, had a blast!

A few more pics. with more to come. 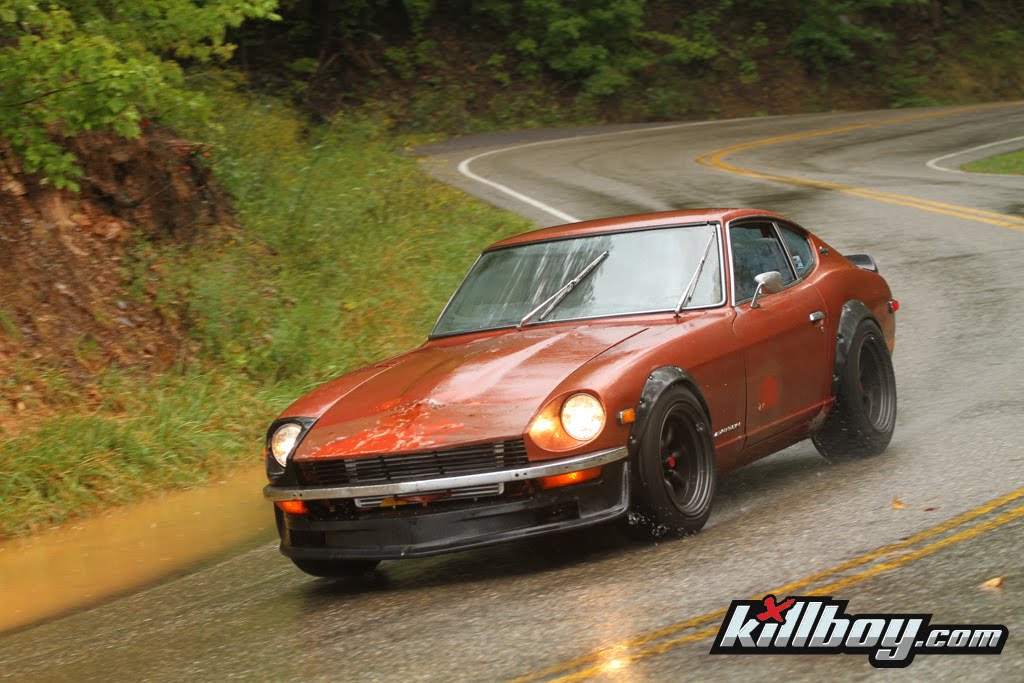 I think Gordon needs to hop on there and set some ppl straight. Did you read the comments about rather driving a beetle with a clean windshield!!! and their guesses of what might lay beneath the hood.
Top

Finally found out what color my car is....Saphire Blue! Looks like it was only available in year '93.

You can also see it in the first post of this thread. The blue S13.
Top

Return to “Past NICO Events”