Does anyone know what these two ports on the driver-side of the carburetor are for? I recently bought an '85 720 KC 4X4 that had the wrong carburetor on it. It didn't run well. I picked up the correct carburetor at a salvage yard and a rebuild kit from Napa. I rebuilt it, along with having the air/fuel ratio solenoid rebuilt by a professional shop. 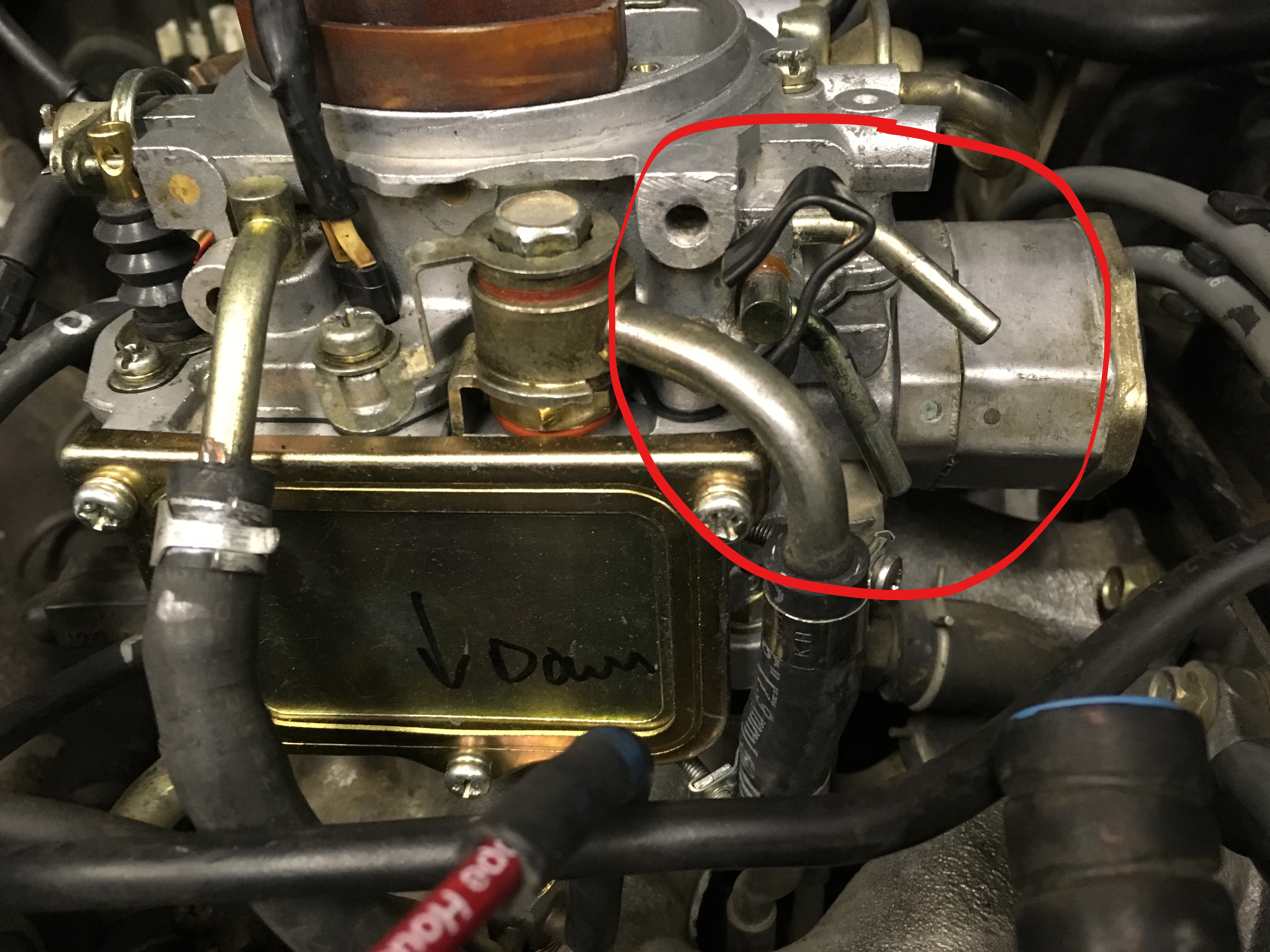 After installation, I realized I have these two ports on the driver-side that aren't connected to anything. I believe they may go to the (high) altitude compensation system, (solenoid mounted on the passenger-side inner fender apron). I believe I have confirmed the device on the fender apron is in fact just that - the altitude solenoid (for equipped vehicles).

Most of the pics of this carburetor that I can find online, show these two ports capped off. ?? I found an online reference to an unknown Nissan 720 Service Manual, suggesting these two caps are removed when installing the altitude compensation system. Pic below. 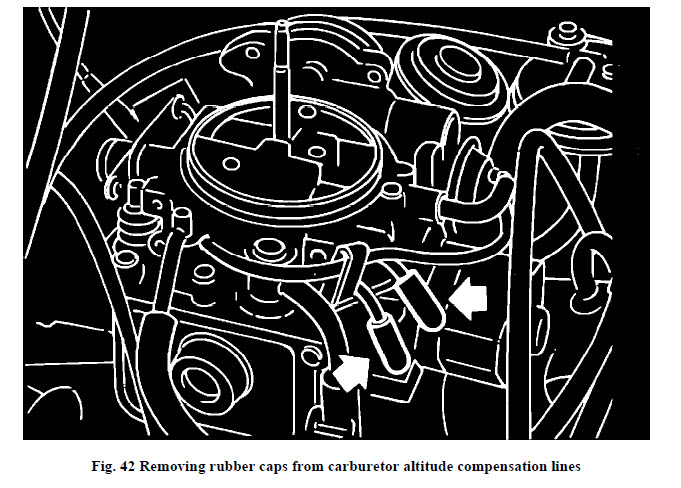 When I run the engine without anything connected to these two ports, the engine doesn't run well due to a vacuum leak from the lower of the two ports. When I cap it off, it runs better until the engine warms up and idles down. Then it stumbles, hesitates and dies. If I remove the cap, fuel comes out of that port!

WTF?! The upper of the two ports doesn't seem to affect how the engine runs.

I tried running vacuum lines from these ports to the altitude solenoid, but the same issue occurs. Same problem...the line to the lower port fills up with fuel.

I don't have any vacuum diagrams of the altitude system to suggest which lines go where. When connecting the vacuum lines up the other way causes the engine to run badly.

I can't imagine fuel is supposed to be in that line by design. The hoses appeared to be vacuum hoses, not suitable for fuel.

I removed the carburetor and checked/adjusted the fuel bowl float level. I believe it is correct.

To determine where the lower port leads to inside the car, I put compress air into it. It escapes through:
1 - The jet in the bowl, sourcing fuel to the secondary barrel on the carb.
2 - The nozzle into the venturi in the secondary barrel.
3 - There is also a small hole on the inside of the barrel, toward the top,that also seems to allow some of this compressed air out of it.

Has anyone any expert knowledge of the internal intricacies of this carburetor? Or, the correct routing of the vacuum lines to these two ports? Or, experience with the altitude compensation system?

All of what your describing - sounds like some sort of "float bowl vent" and altitude compensator has something to do with "controlling" the conditions inside your float bowl - ie. adj. for low pressure @ altitude , a guess from my days w/carb cars. I'm not trying to pretend to say I have specific knowledge with that carb - on that vehicle ,though.
Top

Thanks for the speedy reply. Yeah, the metal hard-line pipe on the left side if that image (the right-side hard-line is the fuel supply) is the bowl vent tube and that larger black hose runs to the charcoal canister. I was also getting a little fuel in that line too, which might suggest a bowl that is too full, but I made the appropriate adjustments (according to the carb kit instructions) and it's still pushing fuel into those ports.
Top

Yes on last post and the bowl vent. Bowl vent should not have liquid fuel at it. And a bowl vent does not go to a venturi or jet at all.

The other smaller one sounds like It could easily be your altitude comp thing, the fuel ratio changes based on some input on that nozzle to activate or meter it. Why it ties into the fuel metering like jet and venturi. The upper hole is an air bleed.
Top

Cap both ports off. If you have the idle mixture set correctly to not miss and run fine at IDLE with lower hose unplugged you simply may need to reset all to correct again with it plugged off, the vacuum leak affected your setting mixture and idle speed there. Try resetting all again with both plugged. Warm engine doing it.

Depending on your location you may not need alt comp at all, say not in the mountains and close to sea level and why most have that plugged off.

If that doesn't work you can try running a short vacuum line from the upper to the lower to join them together and reset idle mixture and speed again. The alt comp device is simply metering between the two ports in some way to modify the mixture there, one way likely to be the right one (both plugged gets my vote).
Top

Check the top nozzle by blowing into it, if the air comes out top of carb simply a clean air pickup point, or the accessory air bleed we are talking about here may be in it. If a third vacuum line goes to the altitude comp unit you may want to block that one off too. If electrical simply unplug it.

My thinking is that the alt comp kicks in past a certain point to modify the otherwise sea level a/f ratio with it off. When activated it bleeds more air into the circuit to lean it out more and what happens at altitude. I've seen others that simply had you move a setscrew off say a seat to activate another air bleed but manual in that case, you did it with engine off and car high in the mountains. Others use an aneroid bellows that meters an air bleed needle, at the correct pressure it begins to bleed more air to lean the carb out. The bleed metering point here may be in the top vacuum fitting circuit or in the alt comp device itself.

Yes, it could be normal to get fuel at that line since it ties directly into the metering circuit there. Plugged it hurts nothing. All vacuum hose is expected to be exposed at least to some fuel, the vapors are inside most of them.
Top

You may not be able to set idle mixture if the carb is a feedback one. You can bump idle speed up though.

Suspected operation........air comes in top fitting from carb top and either a wide open hole or restriction, it then flows through top fitting to alt comp device which has a restriction there if not in top of carb, that second restriction point may be variable, air gets metered and fed back into lower fitting to alter the main mixture there to lean it out, the compensation.

Non-high altitude equipped cars simply leave it out and not needed , why they are capped off.