Info. On Tiny Bulbs In Console O/P Gauge and Voltmeter

Info. On Tiny Bulbs In Console O/P Gauge and Voltmeter

My 86 720 King Cab has a big open square hole in the console below the heater controls where the mount for the oil Pressure and Voltmeter should be.
I was able to find a nice used bracket & gauge set and am in the install process.
I'm painting the plastic housing today to match the interior color.

I decided that before installation I needed to check the gauge illumination bulbs and replace them. Searching around the internet + this and other forums......I saw one post somewhere that stated the correct bulb was either a 72 or 74.
When I removed the bulbs they were indeed #72. This is described as a T1 3-4 sub Mini wedge type bulb.
After a lot of research, I was unsuccessful in locating any reference to #72 on any web site.

It appears from my trip to the NAPA warehouse store today, that there are various similar bulbs with number(s) 70, 73 & 74 that are all rated at 14 Volts which would be the correct voltage. 12 Volt bulbs are too low and will burn out soon since charging systems regularly make higher voltages than 12 as a necessity to keep a standard 12 Volt battery fully charged.
At any rate, I was fortunate to have 1 of the 2 original bulbs still working that I could test with.

I brought home a bunch of bulbs, #'s: 70, 73, & 74. Tests at home on the original working #72 showed a draw of .8 Amps @ 13.6 Volts.
Testing of the #70 and #74 tested 1.5 Amps and .5 Amps. testing the #73 revealed that it drew .8 Amps the same as the original #72. Further inspection seems to indicate that they both produce about the same amount of glow.
So I'm happy now with the #73 bulbs now installed in the Oil Pressure and Voltmeter Gauges that they'll be the correct brightness as original.
I know from other posts.... that other dash bulbs are larger, but I hope this helps someone in the future who needs bulbs for the console oil pressure gauge or voltmeter.
The Napa Part number for the bulb is simply: 73.
Regards, Ibjman

Update.
The VDO oil pressure sensor I originally purchased was incorrect for the application. I ended up burning it out during testing by accidently sending 12 volts to it from the gauge end harness. POOOF!
I know.......don't let the smoke out of the box, Stupid!

At any rate VDO tech got back to me and say they have a couple of units that can run the gauge but they don't have one that will run the gauge and the warning light in one can.
I chose not to use a tee fitting with a sender + a switch for simplification and to eliminate the possibility of the tee fitting breaking off at the thread somewhere down the road leaving me with no oil.

Both have similar resistance qualities Their part number PS143 has two 1/4" spade terminals one each for the gauge and for the warning light contact.
Their #PS196 works approximately the same way except it contains the more modern harness plug on a pigtail designed for Fuel injected vehicles.

Since my 86 truck was early year and still running a carburetor I chose the PS143 listed in their catalog for an 86 model. I was never able to locate any factory wires in either end of the harness for the optional gauges so I had to string a new wire out to the engine room for the gauge sender.
All works now with the gauge running straight up in the center @ 45 psi. I have no idea how close to accurate it is but for me it's fine as I really just needed something to fill the big square hole in the shift lever console that the P.O. cut there possibly for aftermarket audio equipment?
I wish the console gauge adaptor from taken from a stick shift 4x4 fit my console better, but it's better than the big gaping hole there.
I'm still fiddling with getting all the dash bulbs working......I fixed one in the speedo and created more failures over by the temp gauge.......more bulbs on order!
Next, I have to see if I can fabricate some kind of shifter console gate flexible cover to replace the little sliding discs that are all broken up and missing.
I will die of old age before I get this little truck running Jake.
Regards, Ibjman
Top

I am curious where you are getting your power for the lights in the gauges, you need to understand that the 720 has a weird wiring harness, especially the headlights and gauge lights, if you look real close you will see that they don't have grounds, at least not in the traditional way.
Now if you start trying to make the lights work using grounds, everything will start acting weird, at night you might be able to see the lights on very dim, even though the lights are not on, or you will wake up to a dead battery.
The plug for the gauges/gauge lights is on the firewall in back of the heater, it's really hard to find without removing the dash, but it is back there unless you have a weird harness, you need the pigtail mini harness for the gauges also.
If you have to you can grab power for the gauge lights from the red/yellow line wire on the light switch plug, the park lights have ground wires like normal, I am using a 1982 wiring harness diagram to get the colors of the wires, your 86 might be different.
Here is the pigtail 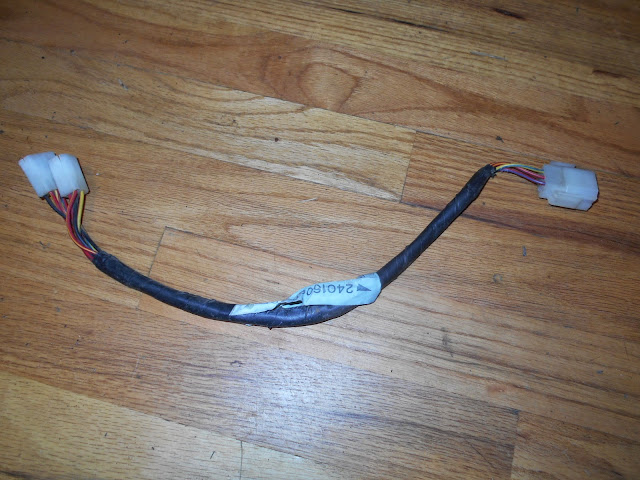 Here is what the sender looks like that you need to run the stock gauges, it has two connections, one for the gauge, and one for the light, it is on the driverside on the Z24 engine just above and in front of the starter, this photo is of one on my diesel engine, same sender. 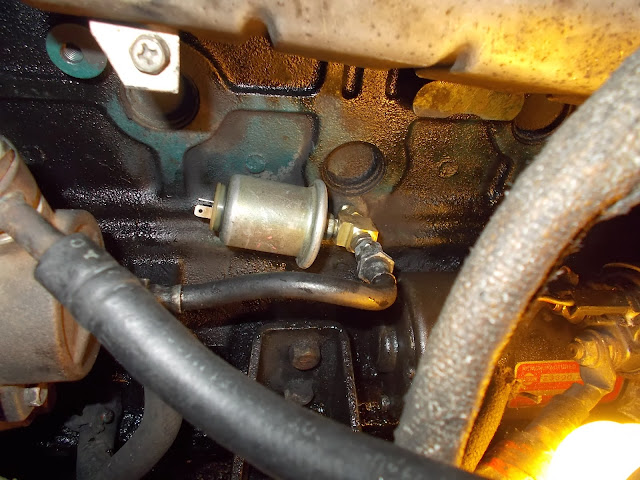 Here is a photo of the sender on my LZ23 engine, this is what it sould look like on your Z24 under the intake manifold. 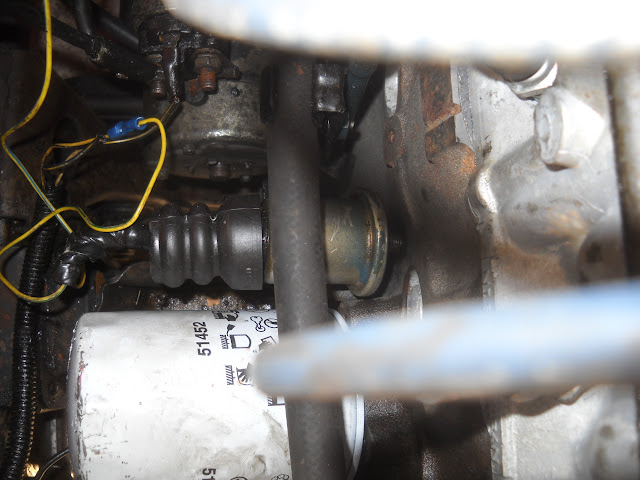 Thanks for all the additional information + the great fotos!!!
The sender in your pic is indeed the correct one and is identical to the one I obtained from AutoZone, their part number #PS143 (Manufactured under the "Wells" line).

I did not have the pigtail shown in the pic......the seller of the used parts cut the pigtail just south of the connectors for the gauges so at least I had the connectors to splice into my "shadetree" wiring job. Aside from that, I'd have never found the original connection point for the pigtail had I obtained one, because like you noted the connector is well hidden behind the heater and (in my case) the Air Conditioning system.

I'm well aware of the "floating ground" system that's designed into the dash lighting system by Nissan where the variable ground to the dash lights is wired through the rheostat dimmer knob next to the cigar lighter. I learned that (the hard way) from the guy in the car radio repair shop when I tried to return the newly repaired radio to him for rechecks because I couldn't make the dial light in the radio function. All is good now that I have the original AM/FM radio wired correctly.
For the gauge lighting.... I chose to "tag on" my wiring, using 2 of those very "Mickey Mouse" blue "Scotchlock" fold over connectors (more later about those).........to the existing wiring for the shift quadrant illumination, since I already had the console removed to install the gauge bracket on it's backside.

Believe it or not, I am a retired, certified ASE Master Mechanic and normally I despise those fold over connectors that squish into the wiring to make a connection.....having previously found them, in other installations, to be the cause of failures in other instances.

It may help to know that I'm now old (68) and severely hampered by ached and pains from arthritis and I have extreme problems crawling around the truck to do the work.
I intentionally chose the factory style sender with duel circuits so that I could install the sender directly into the engine block oil port without the use of a tee that other folks have seen break off later from the weight of the sender and or switch hanging off it.

As a side: I'm disappointed that I purchased this truck because I thought it would be "plain, simple & easy to work on. Boy was I mistaken.......even though this is a tiny 4 cyl engine without fuel injection........I find it heavily endowed with required emissions controls (all connected & working as designed) it seems nearly impossible to get a big beefy hand in anywhere to work on anything without cutting ones arms to shreads. (Old people have only very limited patience for these things).
I had a difficult time wrenching that sensor into the engine, because I didn't want to remove the oil filter for access room creating a big oily drippy mess on the side of the engine & I don't have a 14mm or 9/16" crows foot and even if I did, I doubt it would provide a long enough "reach" to get outside the sensor can profile for installation of a requires socket extension. I'm praying that I managed to get it screwed in far enough so it doesn't fall out or break off at the thread until the next time I have the filter off for routine Mx,
Regards, Ibj...
Top
Post Reply
4 posts • Page 1 of 1