Trick or treat came early this year for Li'l Truckie. No, not the delivery of a dead body, per the wife, or even a dead ginger midget (from Sherlock Holmes) per the son. No, I picked up the INOP transmission off of eBay from neonman52. Not a bad deal for $100 ($50 each for trans and shipping) and accurately described - busted - as we will shortly see. 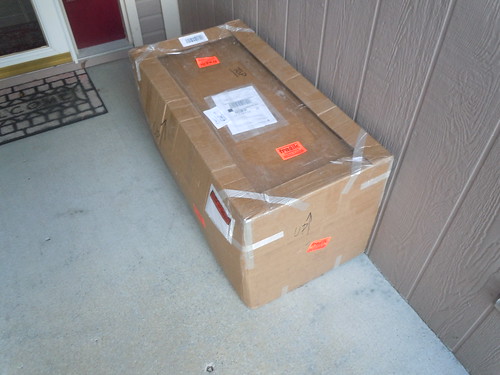 The garage clean up this afternoon went quicker than expected so I ask the son if he would help me perform the autopsy! Initial assessment is a possible exploding cluth and pressure plate due to all of the nicks, small gouges, and markings inside the bell housing. Additionally, the throwout/release bearing in missing half of its graphite face, the input shaft will not turn and the side forward and reverse levers/cross-shafts will not move. 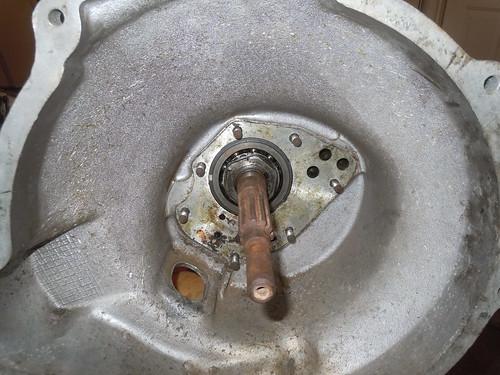 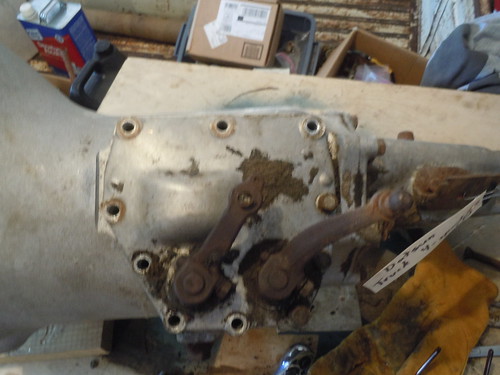 Side bar - Do you notice anything out of the ordinary in the top photo above???? Look close. No hole for the starter and no second access hole! So needless to say I scratching my head on this one. I got the no second hole (maybe the guy/gal forgot), but what I can't figure out is no hole for the starter, hmmm....) All seven transmission from '60 up to late '65 I have in the trucks and packed away have the second access hole and the hole for the tin starter cup.

On with the tear down.

The lock pins on the reverse and forward levers came out easy enough - unbelievable! We continued on. The reverse cross-shaft came out easy enough. But the forward cross-shaft was still pretty much stuck in place. With this I went ahead and removed the transmission rear extension and the two small "clip locking" on the rod forks. These were easy to remove. I use an 8" long 1/4 in extension with a socket and a few heavy taps later each one came out back end of the transmission. I took plenty of pics - inside the assembly and the back side, taking notes which rod fork came out of which hole. 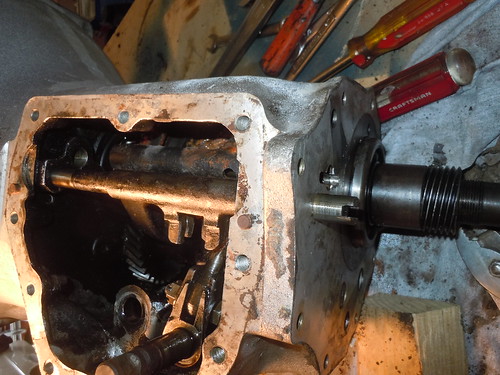 Okay, with all the fork rods removed, I was finally able to remove the forks or rather I was able to wiggle them free. With the forks removed, the son and I could finally spin the front main/input shaft and the rear output shaft. 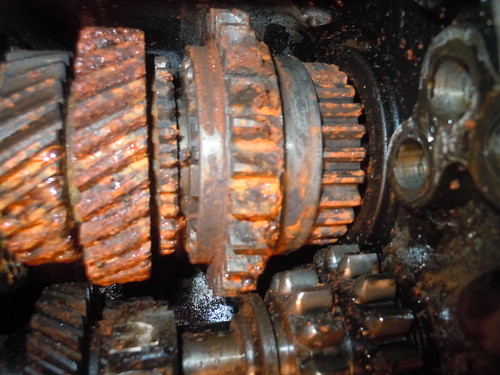 And there is the damage- missing about two inch on teeth on the 1st Gear main shaft (32243-26760). No idea where the metal shavings are in the transmission case. You'd think we would have seen some metal shavings, but nothing at this time.

So where does this leave us? Well for one we have to do some research, send a few emails, and make a few phone calls. This is not the only transmission I have that has a bad 1st/2nd gear assembly issues. I would also suspect there are quite a few more 320 out there with the same unfortunate problem that are just sitting there rusting away. So we will need to find another transmission with these gear ratios or an expert who can tell us if we can substitute some different gear ratios (which I doubt at this time). 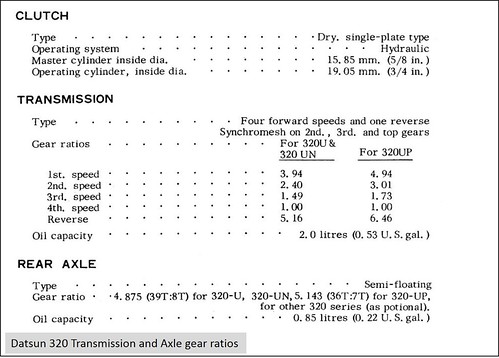 For now I will bag and tag the parts we removed and work on removing the Main Gear Nut so I can remove the gear cluster and see what else might be terribly broke. 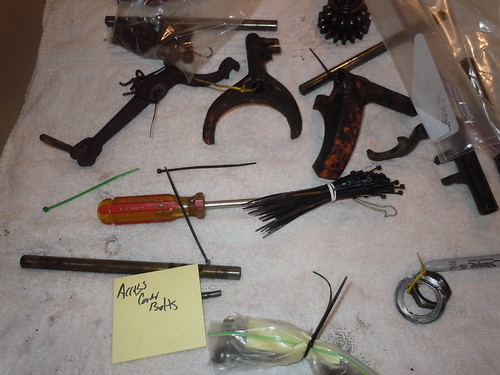 At the very least I have some individual parts that I can clean up and sell or put away until the next transmission project. I know that speedometer gear will go in my one '65, so in the end this transmission will pay for itself.

Well that's it for now. I'll do some research this week and make a few phone call to the East Coast and see what we can find out.