Discussion forum for the venerable 510, and its non-US counterparts, the Datsun 1600 and Bluebird.
Post Reply
8 posts • Page 1 of 1

I havent posted here in a long time, but a car posting brought me back here and figured id update. Some people know me from other sites, some dont. Im Dan Uphoff...the son of Dan Uphoff, so no i dont have parts to sell you.

I purchased Art Hughes prestine preserved (NOT RESTORED) 72 510. Shes my baby, and goes by the nickname Art now. I loved Art Hughes like family, why taking care of his car is very important to me. Pictures will speak for themselves, but shes 99.5% original.


Also i have a 71 Purple 4 door, with lz 2.2, one of the first builds of that motor, thats my modified fun car, im been in the family for over 20 years, and im waiting to restore the rest of her untill my son is older. I also have a 95 pathfinder se, and 2002 g20. I was into sentra se-r's for a long time, and altima se-r's, but after so long of being into se-r's ive just fizzled out. So cool... I've always loved Art's old Dime, and it's awesome that it's got a great home for the next several decades.

Welcome back, Dan. We're in the midst of working on a little something to expand our Datsun influence... stay tuned.

p.s. Any chance you'll make it to JCCS?
Top

One year ill make it, right now the kids are to young to make that kind of a drive, but i did recently get a pathfinder and plan on getting a trailer, once i know if it can handle long distances maybe the kids would be good for a long trip in the pathfinder towing art.
Top

So alots been going on since JCCS.

On my way back from jccs alt went out, so i coasted home on fumes, after that something happened to the carb. It had 2 stripped screws and was pissing fuel out of the bottom. She would run fine when you drive, but if you stopped and idled, she would run bad, rich, and blow smoke, had figured fuel was building up in the manifold and untill it burnt off it would run like crap. So i found a place with rebuilt carbs with good reviews and so far highly recomend them, National Carb, was 220 shipped to my door, and thing looked nearly brand new. We have ice and snow so i cant test drive her, but she idles great, i dont smell fuel anymore, and under load she is fine, so once i get to drive her i will know for sure.

New NOS datsun floor mats, found a dealer that had some old stock, and they had these.

You can see the fuel all over bottom of carb.

Some pics at JCCS.

Fast Specialties in Vancouver Wa owned by d!ck hanna dealerships asked me if they could sponsor my car for the Portland Roadster show to have it entered, i said yes, so i get a free entry into the show which is pretty cool and displayed at their booth, funny a shop that modifies cars wants a stock car displayed. Felt like i was running out of time since show is in a month with having been waiting for the carb. Now i need to road test it when the snow melts, and get her in to get detailed.
Top

Been polishing and waxing her, and polishing the chrome since jccs getting ready for the portland roadster show. Very high end show compared to shows im used to, so putting alot of work into her. Purple has changed colors thanks to plastidip. But art as usual is the same.

Some shots of Purple and Art. 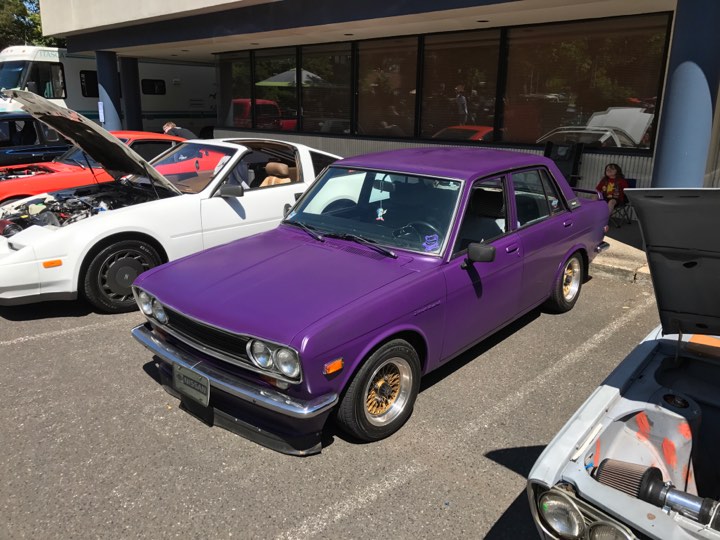 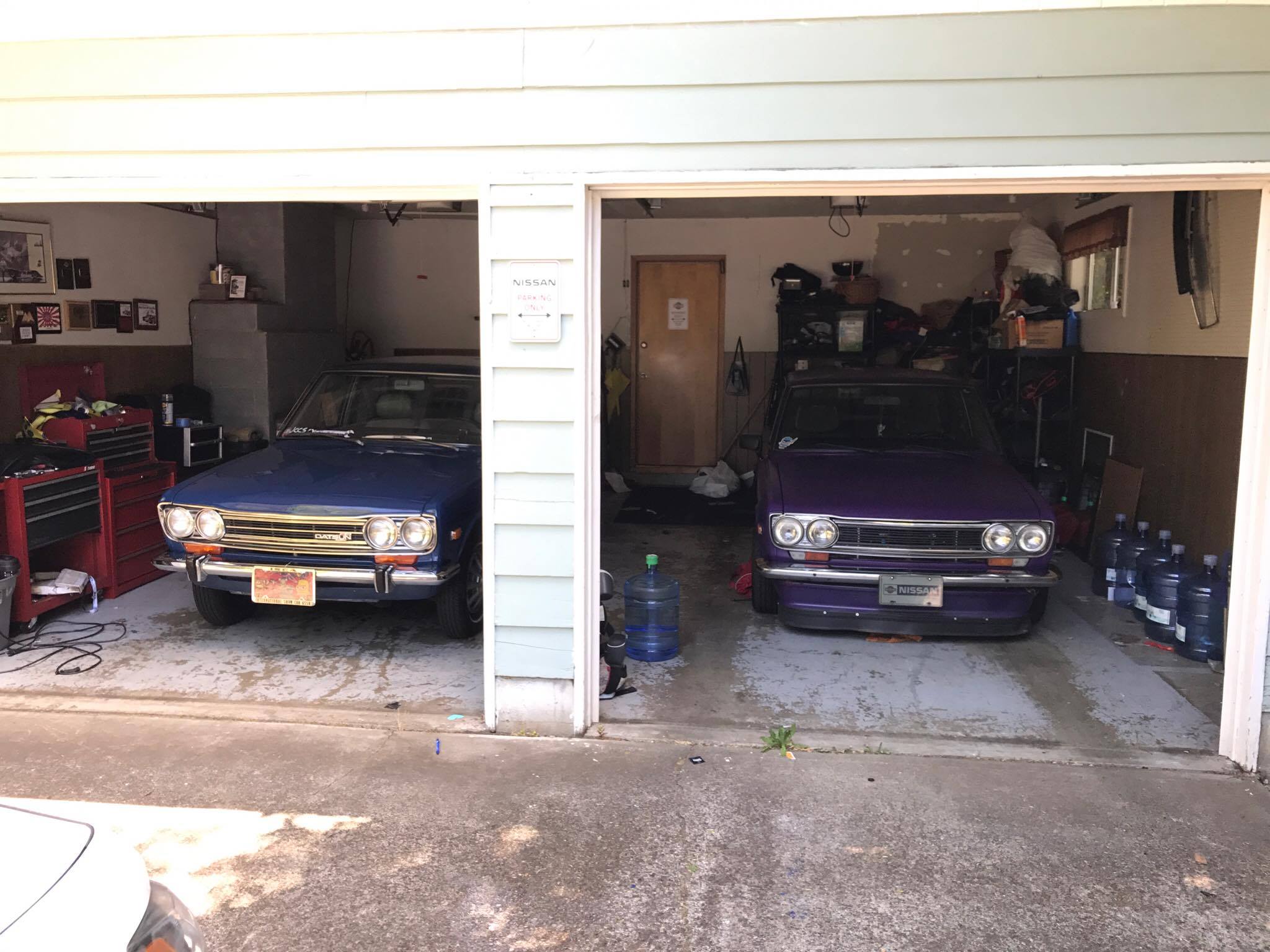 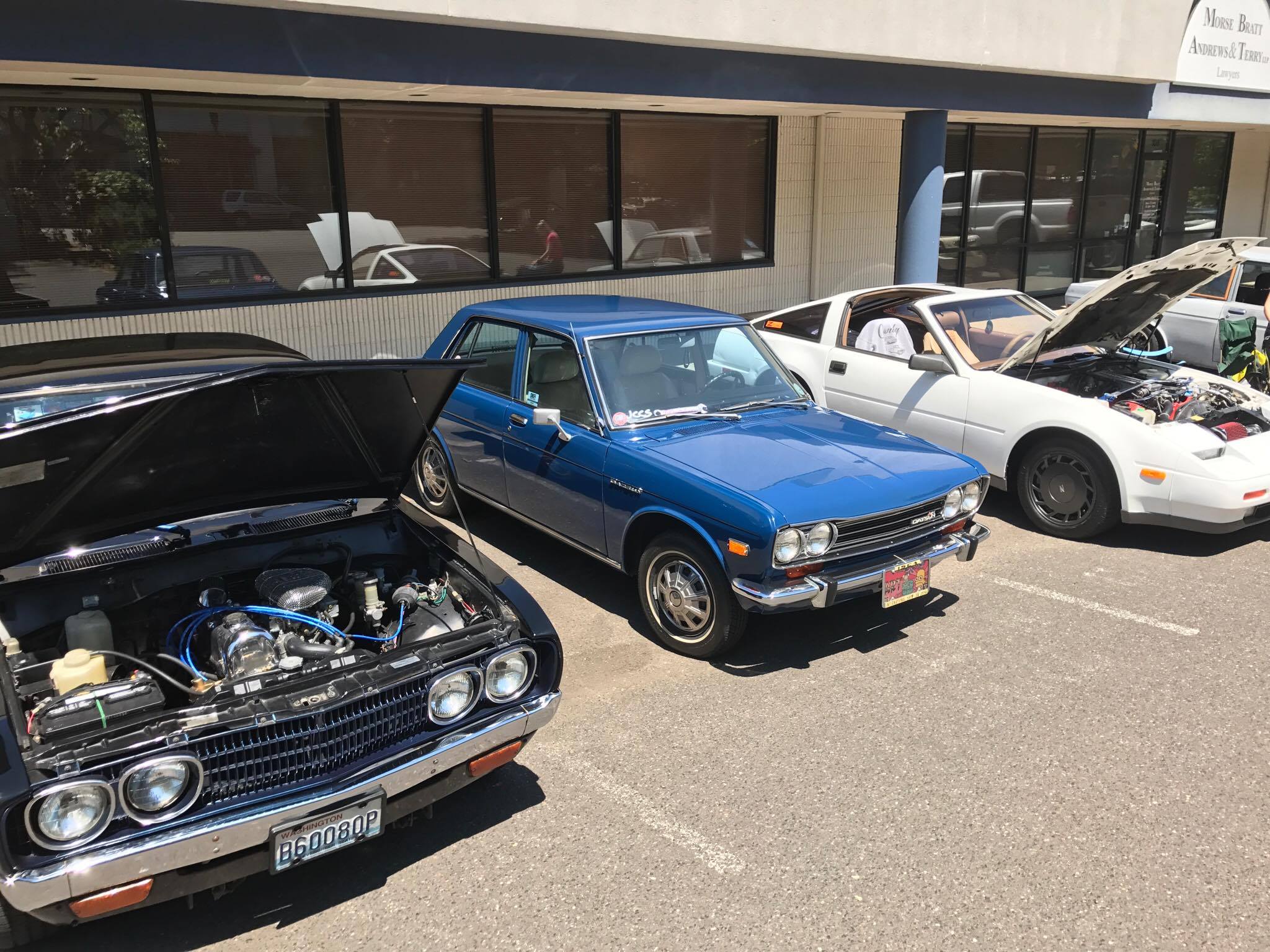