A General Discussion forum for cars and other topics, and a great place to introduce yourself if you are new to NICO!
Post Reply
26 posts • Page 1 of 1

Every year, Bex and I go to Barrett-Jackson for two days. It's a great time, wandering through the cars that will be auctioned, learning about cars we're unfamiliar with, getting ideas on future collectibles, and keeping in touch with the market for collector cars.

Plus, the food is great, the weather is spectacular, and the 'people-watching' is entertaining.

If anyone wants to come out and join us next year, we've become pros at it.

I've long said that two of my 'bucket list' items are to buy a car at B-J and sell a car at B-J. Well, I think next year, I'm gonna mark one (maybe both) off that list.

After the auction closes, B-J posts up the hammer price for each of the lot numbers:
Barrett-Jackson 2016 Closing Bids

Here's my list of cars I really like, AND *could* have bought, had I gotten a bidder's paddle.
2001 Mercedes CL600
I'd daily this for a year - If I don't fall in love, it goes in next year's auction.
1988 BMW 635 CSi
A keeper - One of my all-time favorite styles. I'm really pretty bummed I missed this.
1968 Corvette
My dream car - I'll own one someday, but I'd better get crackin'.
1989 Lotus Esprit
Another one that'd be cool to daily, and flip a year later.
1969 Cadillac Eldorado
This would be hard not to keep - Or, as Bex says, "Drop it and drive it."
1966 Cadillac DeVille
Same with this one, although the condition might make this a great investment.
1995 BMW M3
Not a huge fan of the color, but as a straight keep-and-flip investment, this is a winner.

I'd love to hear your thoughts - What would YOU have placed a winning bid on?

Wow! I was not aware that cheaper cars rolled off the auction there, too. The CL went for damned cheap. Same with the '68 vette. I'd love to have one of those.
Along with the Esprit.

I don't want it so badly, but its probably one of the few 4th gens that is now more expensive than it was when purchased new. I'm kinda surprised to see this one in there, let alone seeing it go for nearly 30 grand.
http://www.barrett-jackson.com/Events/E ... AM--191196

These are my "I wish" cars
'63 Corvette convertible. I'd prefer blue/white but beggers can't be choosers
http://www.barrett-jackson.com/Events/E ... BLE-185704

A staple to own for at least a summer before selling to someone else to enjoy, a true '77 black trans am.
http://www.barrett-jackson.com/Events/E ... TOP-188555

Honorable mentions:
Someone built the car that I built the last time I played a Forza game. A 427 LS7 Supercharged Saturn Sky.
http://www.barrett-jackson.com/Events/E ... TER-189474

I went on the family Sunday day. The real surprises of the auction were the prices the 77-80 F Bodies brought. $110k for a 301 Turbo car? HOLY CRAP. I do have a weakness for the Bandit TAs.

Also liked the 3 Boss Nines they had.
And the '58 Packard Hawk. May be the first time I've ever seen one of those not in pictures.

Trucks are hot. A bone stock 72 Blazer bringing $40k+...wow
And I loved the restored '82 Toyota SR5 4x4 truck. It's just like the one I learned to drive in. That sold for about twice what it cost new as well.
Top

My favorite (from what I saw on TV) was the Delahaye. Stunningly gorgeous. I'd kill to have it in my garage.
http://www.barrett-jackson.com/Events/E ... HIK-190071

There was also a Cord 812, one of my all-time favorites. It was a convertible, but I'd tolerate that for a Cord in that condition.
http://www.barrett-jackson.com/Events/E ... BLE-188984
Top

frapjap wrote:Honorable mentions:
Someone built the car that I built the last time I played a Forza game. A 427 LS7 Supercharged Saturn Sky.
http://www.barrett-jackson.com/Events/E ... TER-189474

So, who's gonna go with us next year and buy a car?
Top

Is there a registration cost to bid? Does the seller pay the fees for the auction?
Top

Just look at this. How did the French go from building cars like this, to the trash Peugeot and Citroen crap out today? 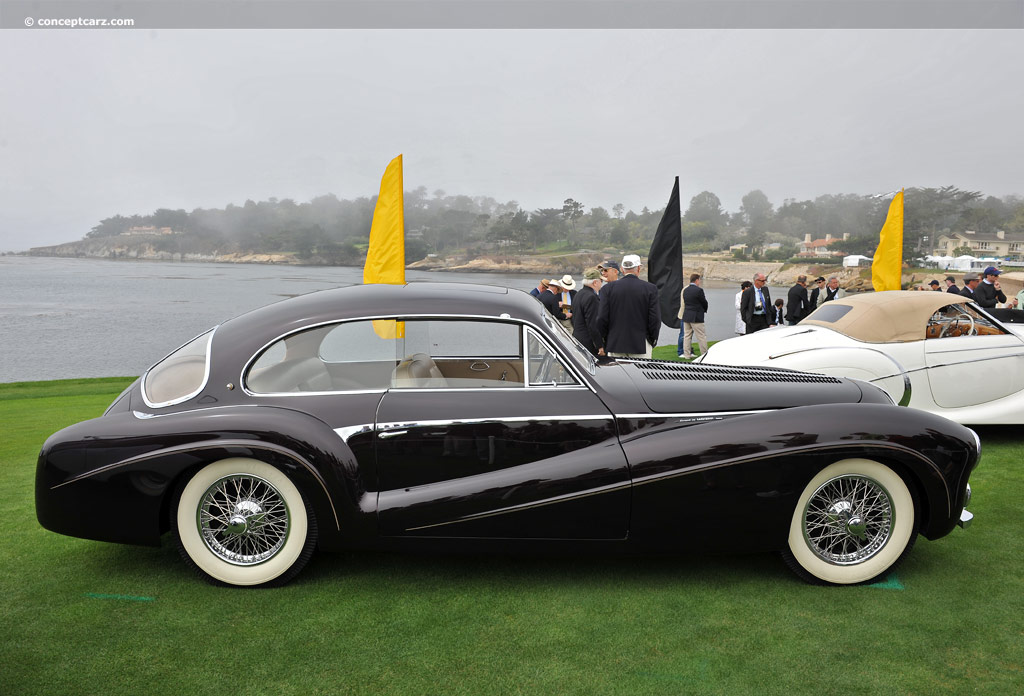 frapjap wrote:Is there a registration cost to bid? Does the seller pay the fees for the auction?

Yes, there's a price to get a paddle. Seller and buyer both pay a commission.
Top

MinisterofDOOM wrote:Just look at this. How did the French go from building cars like this, to the trash Peugeot and Citroen crap out today?

Totally agree... but I was kinda hoping you'd play along.

I am so confused.
Top

Shoot me a reminder 2-4 months in advance. I'll go.
Top

MinisterofDOOM wrote:I am so confused.

AZhitman wrote: After the auction closes, B-J posts up the hammer price for each of the lot numbers:
Barrett-Jackson 2016 Closing Bids

I'd love to hear your thoughts - What would YOU have placed a winning bid on?

I've always wanted to drive one of these: PapaSmurf2k3 wrote:13 seems not horrible for this el camino:
http://www.barrett-jackson.com/Events/E ... KUP-189636
I saw another one on there (SS396) that was double that price.

Your redneck is starting to show.

Hey, its a segment that you can't even buy anymore.
If we got the Holden Ute here, I definitely would have cross shopped it against the 'vette.
Top

Tack on 10% to any hammer price and that's what you pay. You'll also pay AZ sales tax on top of that if you register the car in AZ.

Bidders passes I think are around $250, and you have to be prequalified financially through a letter of credit.
Top

Just for fun, we loaded up ALL the pic we took at the auction!

I'm a huge fan of the old Chevy pickups and this thing was beautiful.

Absolutely stunning. Do Want. Sell a kidney, damns not given.

This one was fantastic because it was completely original.


The great thing about being able to go to this show every year is that there is always something that I've never seen before. There are also cars that I couldn't care less if I ever see again. '57 Chevy? No thanks. Any year of Mustang: Not a fan. This year I have to admit I was a bit disappointed in the "salon" cars (the ones that typically go for millions of dollars). Slim pickings. Not a Duesenberg in the whole show and they are my all time favorite "old" car.

It's a great show. Everyone should go once if you have the opportunity.

I wish I'd have watched more.

There were a lotta vehicles I really liked but none I felt I needed to have.

3 that caught my eye:

[quote="PapaSmurf2k3"]I've always wanted to drive one of these:

I have. Fun little car, top is annoying. Good car for someone that likes to wrench their own car. You'd have plenty to keep you busy. $23K is not outrageous for an uber clean one.
Top

I've always liked how low slung the doors are. The beltline of the car is pretty much the belt line of the occupant

Somewhere along the line I've developed a liking for cars styled like that. I wonder what its worth since the reserve wasn't met?

Even the older 1920-1930's Ford, Dodge, Pontiac, and Chevys with the curvaceous fenders and step sides are catching my eye and I'm really starting to like them. They're pricier than anticipated though. I'm quietly hoping that they start to depreciate again since the folks who love them are getting older and passing on, and with less of a devoted following, I hope to pick one up at some point to cruise around in for a summer.
A black '32 hupmobile sportster would be sweet.

I've thought many times about muscle or antique cars peaking and depreciating again, as us baby boomers are disappearing. But surprisingly, prices still keep on going up. I agree with you about the 20's/early 30's cars. That Hupmobile is beautiful. My father said he always wanted a Model A with a rumble seat, much like Greg's. But he never went thru with it, and ended up with sports cars..