It has been a while since the last time I was on here.

I did a few more things to the Z since then, but my hobby has shifted to photography a bit now. Here are a few shots I've taken of my Z. Currently the rear diffuser is gone, and the bumper is now tucked with HKS Hi Power exhaust. Great Ceasar's Ghost! It's been a while, it's nice to see you & the Z survived the floods up there! I saw some pictures of the Edens expressway and thought about you and where you might be parking the Z for safekeeping.

It's still my favourite red zed (shame on you for not running that license plate). Don't be a stranger!
Top

Yes, it has been a while. Actually my Z has been in the garage most of this year. I've driven it about 5 times so far this year. Good to see you again, Badger!
Top

Thank you. It is authentic Nismo front lip, and yes they used the pic without my permission. I requested them to take it down, but they still haven't, so I just gave up.

How can I put a picture of my Z up? Just signed up to this
Top

Upload photos to Photobucket, then copy the image code n paste it in your post.

Snapped this one after NM Desertfest.. Alot of beautiful cars there.

I think I've been a member over here for awhile, however I never checked. So, here are a few recent pics of car at some Z events. Omega-Z your Z it just GORGEOUS!!

were did you get your sideskirts ^.^
Top

Omega-Z wrote:I think I've been a member over here for awhile, however I never checked. So, here are a few recent pics of car at some Z events.

were did u get ur sideskirts from ^.^
Top

I spent the weekend doing what the previous owner neglected on her poor paint.. (He must not have waxed it..) - It felt gritty.. looked good, but gritty.

Picture doesn't show the finish too well.. but I'm no professional photographer, and using my Phone

Here's my pride and joy! *Click for larger image* as it sat before winter hibernation:

My BAby i call Her Julie, she excites me everytime im in her.

its not bad for my area, n thats real grass lol

No garage (yet), but I'm on a mission to get my s13 running before i start saving up for that project.
Top

Just when she arrived yesterday

I deem her the black turtle

Berry! Are you back in the Z game again?

BusyBadger wrote:Berry! Are you back in the Z game again?

Surprise! I took quite a trip but this is where I've arrived at!

If you're still up in Chicago you should have checked out Kuhan's Z that he was selling. Of course, it was priced a lot higher than a base '04. I considered it but never decided on it before started parting it out.

Any plans for the Z? If you're still rocking the Civic you can put the Z up for the winter and not let it get beat up on those God-awful roads.
Top

New 350z owner here in Gilbert, Arizona. Bought an '06 Redline base 6MT a couple months ago and just found this site. 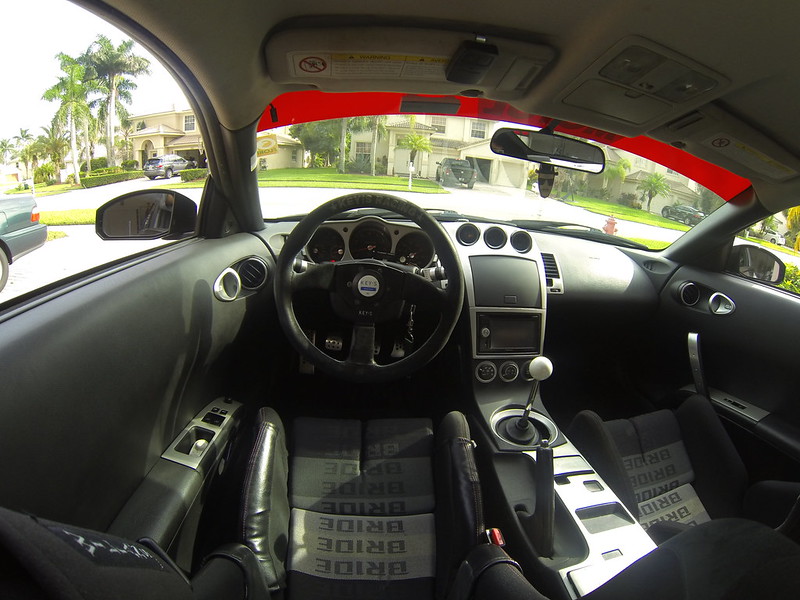 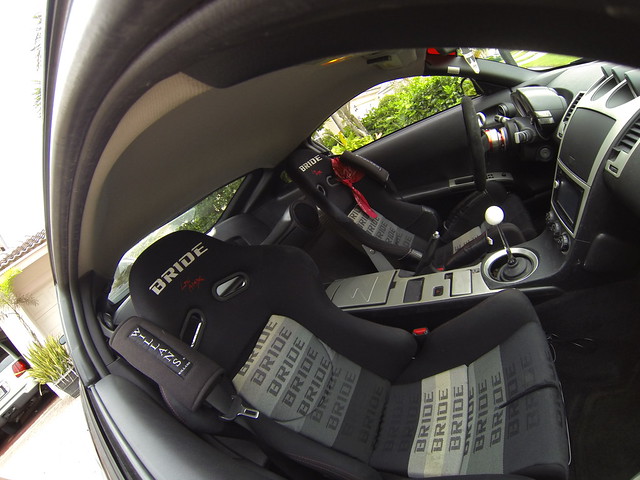 Hi all, just wanted to introduce myself to the group. After a 30 year hiatus from Z ownership (family, home, etc.) I finally rejoined the "Nissan Society" a couple of years ago. And since then have owned four in addition to four S30s and a Q45 back in the day. (You can check out my .sig for specifics if you want).

This one is mine (while wife drives "Nemo" in the .sig).

​
Not a lot done to it. I'm old school with regards to modifications.... "Improve the driver THEN improve the car." My theory on modifications is that you take an already decent platform then WHEN I can effectively "use" 80% of the CAR'S capabilities THEN I'll make whatever mods are needed based on enough serious seat time to determine where the changes NEED to be made to correct any "flaws". I like to think of this as "Stage zero'ng the car to my preferences." Laff...

As such, not a lot needed to be done to my Z33 for what I use it for.... Sunday morning mountain/canyon runs and general to/from stuff during the week. (My daily driver is the Volvo in the pic....heh heh.)

The list of mods fits on one hand:
- V.1 Track forged wheels - and in the process, dropped some 7lbs (!!) of unsprung weight off each corner and mounted with Sumitomo HTR-Z-III's (which are surprisingly good for the price!) resulting in really nice steering response, turn in and recovery.

- Hotchkis adjustable bars to tighten up front/rear steering bias for my style of driving (I don't drift.... maybe a little oversteer with controlled rear breakaway if that's the fast way through a corner).

- In the next few months likely to upgrade to NON-coilover suspension - mainly due to the original shocks having 70k on 'em. Non-coilover because I know me well enough to know that I won't ever adjust it since I don't track the car so it's a waste of money for me. If/when I decide to go racing again (yeah, been thinking about it...

At that time I raced a D-Prod SRL-311 and time trialed (Solo 1) an SSA 280Z in SFR and CalClub. (Perspective: I raced at Sears Point and Laguna Seca BEFORE they were ever reconfigured for Indy cars and Riverside BEFORE it got turned into big box mall (or whatever it is now). And ran WIllow Springs before Thunderhill was even conceived!) Old.... hahahaha.

I recently sold a couple of my Z's - one, an RHD Fairlady shell/roller that I'd only gotten about as far as stripping to bare metal before selling it to a friend. I was going to do the whole JDM 432Z thing but lost interest. He swears it'll be back on the road by 2016 but I'm not holding my breath.

Also just sold another friend my '90 Z32 NA model which I originally bought on a whim.

Anyhow, it's really GREAT to be back in the fold and would be interested in bench racing with other local (SF Bay Area) Nissan fanatics!
Top

Hey guys, new here from the Eagle Ford Shale oil field area of Texas.. Picked up an 03 with 84K. Getting the bugs worked out. Have yet to buy a used car that didnt need some cash thrown at it.