Discussion of Infiniti's amazing (and underrated) sport-luxury crossovers, the EX35 and EX37. For 2014, the EX series will be renamed QX50, in line with Ininfiit's new naming conventions.
Post Reply
7 posts • Page 1 of 1

First, thanks for the add. I appreciate it.

I've tried searching for this issue, but didn't find anything exactly like what I'm dealing with. Hence, the post.

Story: My girlfriend had an encounter with some oversized decorative rocks which she clipped with the front right end of the car. Tore up the front assembly pretty good. Driver's side airbag deployed, and nothing more. Car went to repair center to get fixed. Replaced everything including front airbag, clock spring, both front seatbelt assemblies, and car was back on the road. She didn't have collision insurance at the time, so I had to pay cash out of pocket to the tune of about $4800.00 which sucked, but...what could I do. I lived 1300 miles away at the time. When she got the car back, they said they couldn't get the airbag light to go off and she would have to have that reset by the dealer.

4 years later...it's still flashing, and I'm now living in the area with her. She recently took it to the dealer for inspection who said up front it would cost $600 to repair, but didn't give any details. Took it to a local mechanic who went through it. He said the clock spring didn't appear to have been replaced, and in fact, the wires had been cut up on it pretty good. He replaced the clock spring with an aftermarket one that cleared that code. He suggested taking it in to the dealer for the rest.

So, being the "Mr. Fixit" that I try to be, I hooked up my scanner/reader to the system and got a B1089 error message with "PRE-TEN FRONT LH (SHORT) - DTC Status: CRNT." 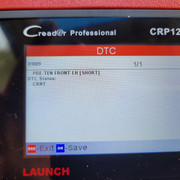 I decided to take out the control module (under the center console) and the driver's side seatbelt assembly to have them reset. Once re-installed, the airbag light is still flashing (1flash, pause, then 3 repeated flashes, pause, then repeat). I tried resetting the system with my reader which only stopped the flashing for about 5 seconds, then resumed.

So now, I'm at an end. Not sure really what to do.

The only thing that I was concerned about when hooking back up everything was the connector for the seatbelt pre-tensioner looked like the black tab was broken. It inserted okay, but I am not sure if it is making the correct kind of connection or not. It will not stay in firmly, so I put some duct tape over it to hold it in firmly. 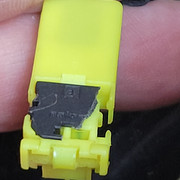 If anyone has any other ideas, I sure would appreciate it.

That lock is your problem. There are plastic tabs on it that depress springs to make the connection with the male pins and disconnect a pair of shorting pins. With the lock broken, the pin on the broken side is staying open and the shorting pin is disabling the tensioner. Those connectors aren't difficult to take apart, the body just separates top and bottom. Get a good lock from the JY and your code should go "past" and be erasable.
Top

PS - There are at least a few of those connectors on every Nissan/Infiniti model going back to before 2000. So you shouldn't have any problem finding one. There are four versions, short body and long, yellow and orange. The lock from any long body yellow will fit that housing.
Top

Hey VStar650CL -- thanks so much! I have ordered one (pigtail) off Ebay. Soon as I get it installed I'll let you know if that works out okay.

You're most welcome. The locks are no big deal to swap, you're better off swiping that from the pigtail than cutting wires. If you do cut, keep in mind that the tensioner is an airbag with no bag. Use proper precautions and don't blow it up!
Top