Hello everyone! My girlfriend received her mom's 2008 Nissan Rogue (that was bought new by her) about two months ago, and I've been doing some upkeep on it and have become a little familiar with it.

Well on the 14th of this month the driver's side (exterior) door handle stopped working after it dropped below freezing. I did some googling and found out that its a semi common problem with a recall on it NTB09125. The recall was to install new handle gaskets and apply a better grease to the actuator. We called the dealership that they bought this car from, and they told us that her VIN is archived and that it essentially wasn't their problem anymore. I thought recalls always had to be honored, so we called Nissan HQ and they said the recall was "closed" and now the dealerships problem. How does a recall close? Who knows. Anyways I found a guide on how to pop it back in place, and took the door panel off, window out, etc etc and got the handle off and door actuator cable back in place. I also lubed it up with some Valvoline Synpower chassis grease, as the factory grease was almost non-existant and all dried up. It worked great...for a week.

Then on the 23rd as she was leaving work, it did it again. The door wasn't frozen shut and she wasn't using excessive force as it opened easily with no issues from the inside. This is a major safety issue. She's a young woman, and having to open up a passenger door, lean over to push open her driver's side door, and go back around to the other side of the car with two car doors open leaves her vulnerable. If she tries to close the passenger door before getting in the driver's door, the vibrations jiggle the door shut. There's been a lot of sex-trafficking issues going on in the local news of young women being abducted from parking lots, and it's downright dangerous leaving work at night like this. We called the dealership again, and seeing as how their service department is closed over the weekend, we left a message and they promised they would actually check their records harder to find out what they might be able to do and call back Monday.

So this leads me to a couple of questions
1) Is there anyway to make them actually do the recall and prevent this from happening again? Her mom bought this car brand new, and literally just bought another car from the same group of dealerships in full before giving her this one. Maybe we can use that as leverage to get them to honor their own recall?
2) If not, does anyone have any tips to prevent it from slipping out? Like can I try to steel-stik the little slot that it slides out of? (Obviously after putting the cable back in place again). I'm not sure how that would work, but idk if anyone else has tried to permanently fix it on their own and has any pointers. I'm not okay with redoing this once a week, it's a major pain in the butt to disassemble the whole door panel, take the window out, and somewhat blindly fiddle around in there. And I will soon be starting nursing school and won't be able to keep constantly fixing this known problem.

Thank you all for reading this, and sorry for the long-winded post, we're just incredibly frustrated with this situation!

My only suggestion is that you seem pretty good at cars, and this is coming from a guy who is able to work with cars because of the internet, YouTube, and forums like this.

I am no mechanic, only knew how to change oil and that was it.

Find a way to fix it yourself if possible! So you won’t potentially get hosed by your dealer.

My problem was with the rear driver sides door handle no longer working. On top of the child safety lock being on because I couldn’t even open it by the inside. Lucky me!

So I take it to the dealer and they tried to charge me $600 for the window actuator. They didn’t even open the damn thing because the child safety lock was still engaged.

And the dealer didn’t even charge me a diagnostic fee out of the kindness of their heart. When you know THAT was the norm. Boy do I feel sorry for women who bring their car in for problems.

, I told them I will think about it.

First I cut a credit card into a certain shape to hook the child safety latch and unlock the darn thing.

Went to YouTube on how to take door apart to fix my handle.
My skinny arms were able to slide in and explore the broken ball on the end cable.

So I just took some plyers and barely twist those spread out end wires around where the ball use to be attached at.

Problem solved and over $600 plus taxes saved.

I’m always waiting for it to break and even tell the kids to use the other door most of the time since I tell them it’s still broken inside.

But half a decade later it’s still going strong!

So word of advice, fix it if your good with cars!

Yeah I'm thinking I'll have to fix it myself again. I just don't know what to do to stop it from happening! I've done head gaskets before (on a Neon), so I should be able to figure out how to keep a dang wire ball in a slot. I could squeeze a little RTV or epoxy putty on the ball or on the little slide hole for the ball. I just don't want to lock it in place and cause more issues, you know?
Top

Maybe you should just cut it off, and use the barely wire there to wrap it around like I did. Lolz

So what you're saying is that the wire just needs to be attached to where the ball is located? So if I bonded the ball in place, that might work? I assumed that the ball itself needed to move around, but if it doesn't... That opens up a lot of potential solutions!
Top

So I went back in and fixed it today after an interesting trip to the dealership. They claimed to have already performed the recall in 2015 while simultaneously claiming that the recall didn't even exist. I decided that they were too annoying, shady, and frustrating and took care of it myself. Hopefully for good!
After taking it all apart and cleaning up all of the grease I had applied, I went to Rural King and bought the thinnest zip ties that I could, they are "Tool City" ultra light duty 8" cable ties. I then proceeded to zip tie the ball in place by running part of the zip tie thru the little gap that allows the cable to come out, as shown below. 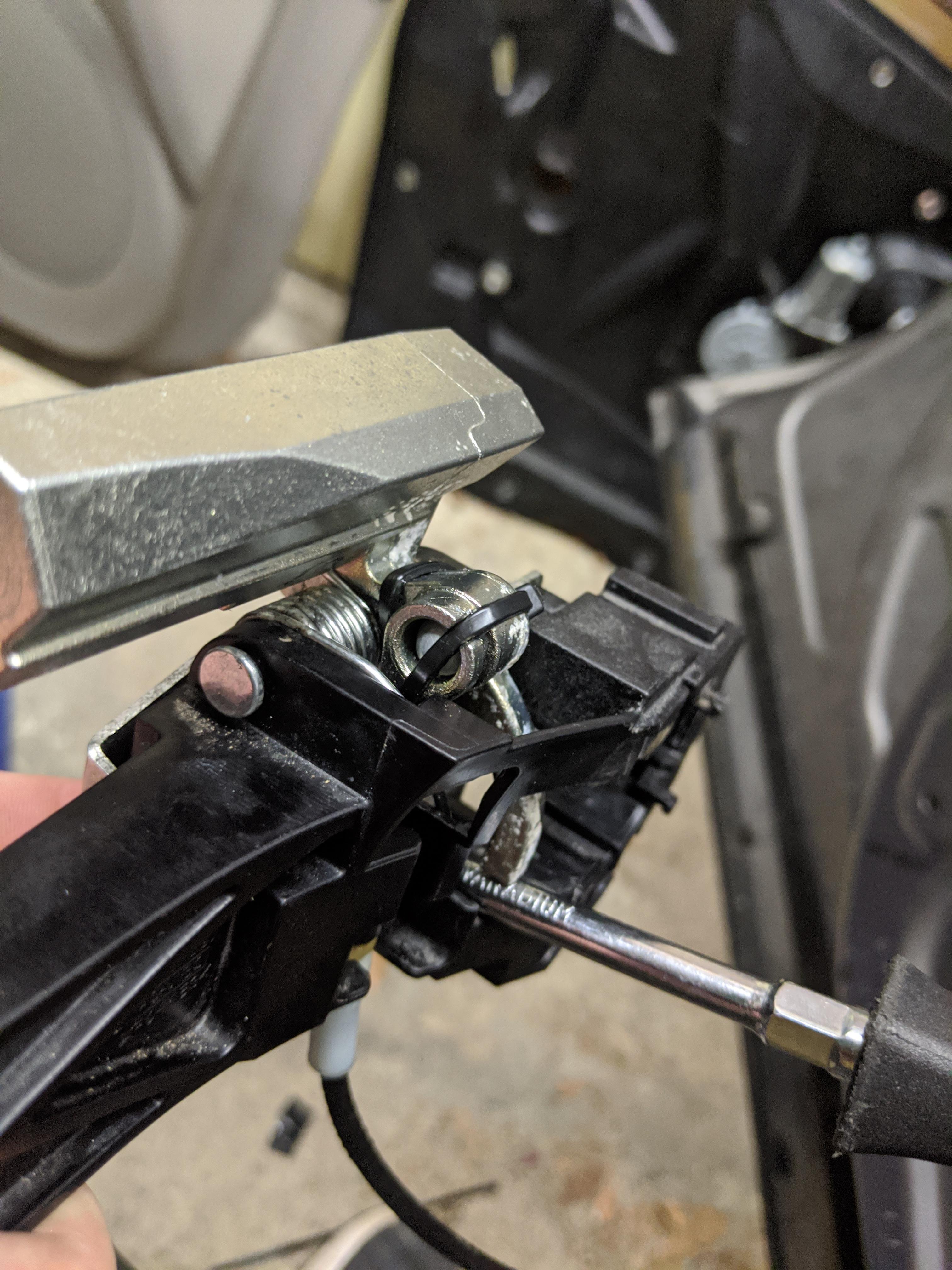 The bottom loop of the zip tie goes behind the cable, so even if somehow the cable got pushed, it shouldn't slide around and off of the door handle mechanism... hopefully.

I also realized that the "head" of the zip tie kind of rubbed on the plastic a little bit near the mechanism, so I zip tied it down to prevent it from fatiguing, as seen in the picture below. 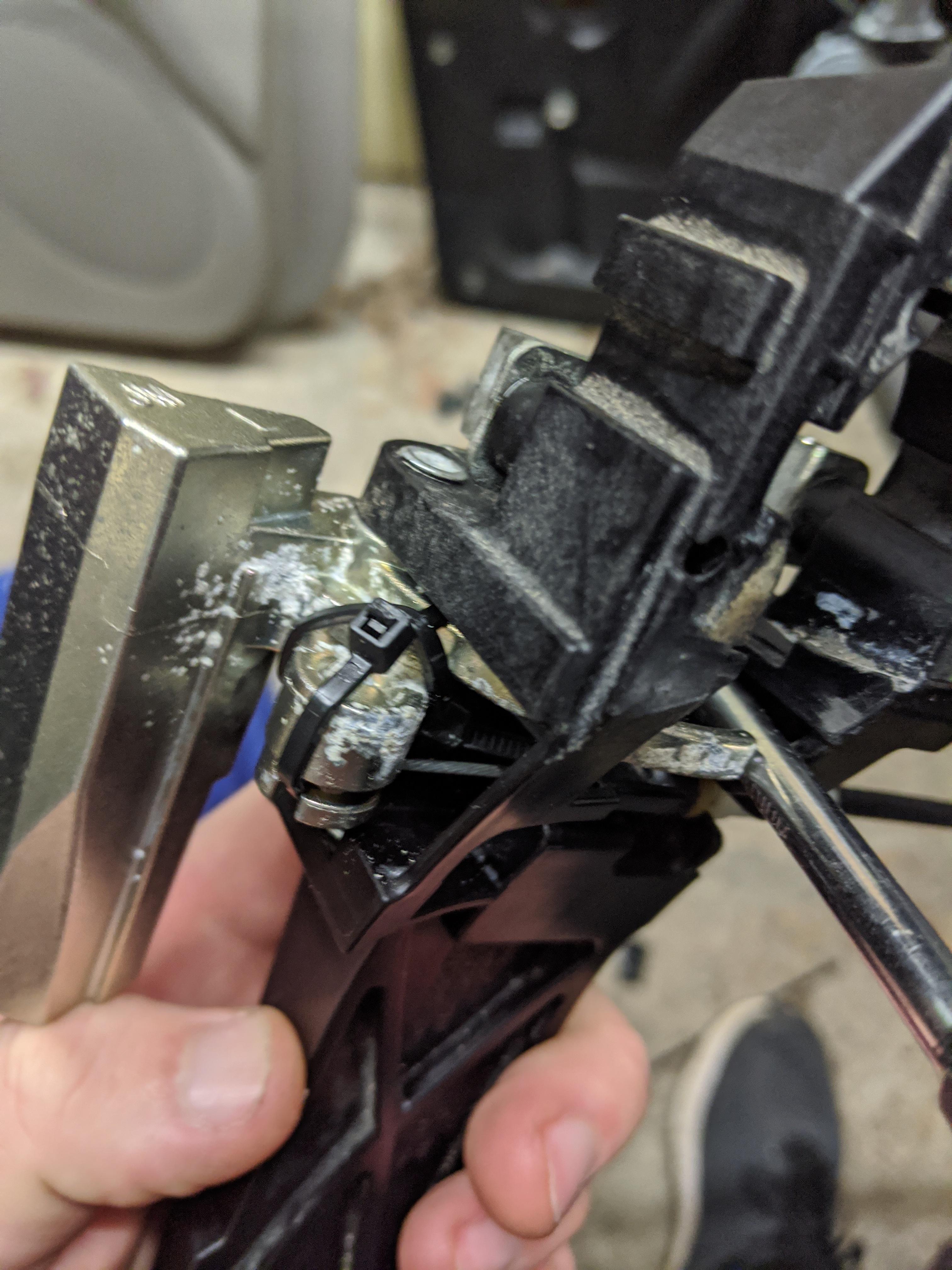 Another thing that helped a lot was jamming a flathead screwdriver through an opening on the handle housing to prop the mechanism open. It's hard to explain, so hopefully y'all can see it well enough in the pictures above!

After zipping it all up, I squirted a little bit of Sta-Lube Sta-Plex extreme pressure spray grease on the ball/cable to lube it up, hopefully preventing freezing and corrosion. I hope that this helps out anyone else that runs into this problem and doesn't want to deal with shady dealerships!
Top

What, no duct tape?

Color me impressed! That looks like a great solution you've got there. And kudos for the excellent write up!
Top

Thank you very much!

And nope! No duct tape, atleast not yet! I briefly considered steel-stick or hotglue as someone on a different thread said they used got glue to keep it in place. However, I felt as though steel-stick might be too strong and would be hard to remove if it didn't work (my best friend's towncar's shift linkage is currently held together with steel-stick

). Hot glue on the other hand seemed too weak. Zip ties seem juuuuust right. Easy to remove if it slips off, but should hold up better than hot glue. Time will tell, though. I'll keep y'all posted if I have anymore trouble.
Top

Hey, I did use gorilla tape one of those big coolant hoses that the dealership didn’t feel I needed it replace. They did replace a lower one though.

Looks solid repair there. If mine lasted over 6 years, yours should last 2 decades! I didn’t even have the ball at the end of the cable to work with.

Seriously, zip ties are my go to item when fixing stuff on my rogue.

Of course I zipped tied my rear speakers in place recently.

I zipped tied that black not-so-rectangular plastic box near the middle with Nissan branded on it because the plastic hole on the end broke.

I zipped tied assorted wires here and there.

Zipped tied miscellaneous stuff on the underbody of the rogue.

Once used zip tie as back up attachments for my make shift cargo basket in addition to some u-bolts. Until I got a real basket.

Zipped tied some rope to my bull bar.

Zipped tied 4 lights to my cargo basket. Their for decorative use only and not wired. Seriously, you can’t tell if they were real or fake. Lolz.

Zip tied 2 fake anti-static earth ground strips but do have a real one attached to the muffler pipe.

Zipped tied 1 loose curb feeler. Doesn’t really work because it’s too short but didn’t want to waste it and painted them black. I’m not into chrome so you won’t see any silver on my vehicle.

Before anybody says anything, everything I mentioned is so subtle and below the radar. You don’t notice all this stuff even though you might think my rogue looks like a rolling circus.

My roof lights use to be the main attraction; which is actually 3m taped on. Which is another topic, I won’t get into. Lolz.

But now people really notice my cargo basket set up which the Nissan service advisor told me that his customers were noticing when I had it inspected the other day.

In other words, all I’m saying is that I use zip tie to find a solution when fixing things. Too many to even mention here!
Top

I had to douche the one on my 240 during a cold snap. Sprayed it in and worked it back and forth a lot. Never had a problem with it after that... then I moved south haha. Its really thin and pretty dirty looking. I can't remember which one I actually used, but it seems like the links above were similar.
Top
Post Reply
10 posts • Page 1 of 1