I have a side job this Friday for replacing the alternator on a 2006 M35. I do not have a computer memory saver and I will not get one in time. I am told of two different ways to help retain the vehicle computer memory without the saver:

1. Do not disconnect the battery, but instead remove the cable terminal from the back of the alternator and wrap the end in a rag or electrical tape and move it aside.

I would feel safer with the second step. However, my search for the fuse has proved fruitless in finding where this specific fuse is.

What do you all think? Am I overlooking something?

You are probably looking for the 140A fusible link on the positive terminal. It is the one closest to the battery post (on top, rather than on the side of the battery).
While at it, I'd also pull the fuse #36 in the picture below. That fusebox is also by the battery. 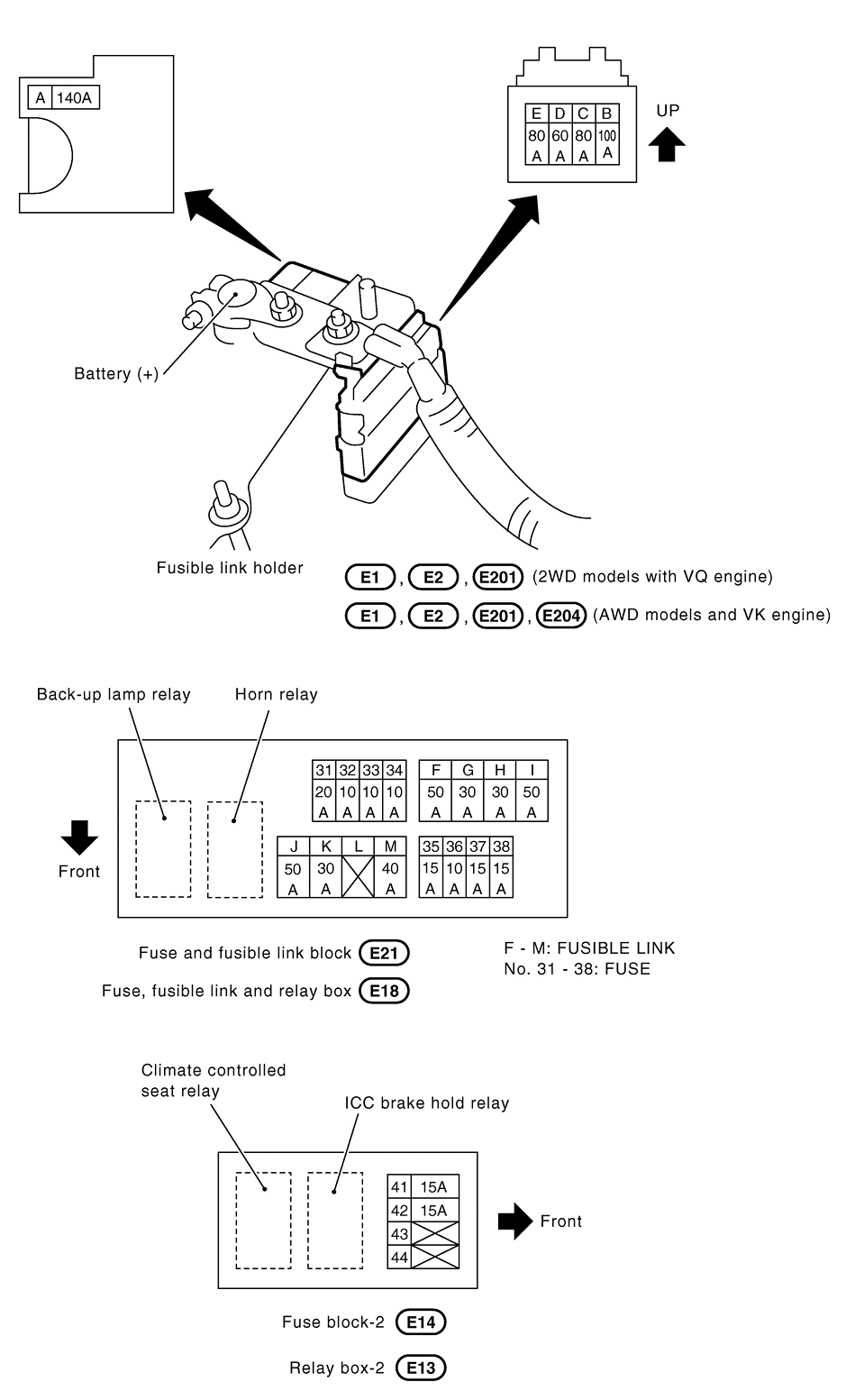 ***
Now that I have answered your question exactly how I thought you asked, I will give you my opinion.

Option #3. Disconnect the negative battery and minimize all the risk, not only to you but to other electrical components.

Personally, if I were a client and my mechanic told me that they accomplished an electrical repair and I still have my radio stations & memory driver positions intact, I'd be very happy. That's going above and beyond.
However, if he/she told me that they intended to save my memory settings, but due to an abundance of caution and a concern for safety they were unable to do it, I would be more than elated that it turned out like that.

Assuming the alternator is completely dead, that means the battery has died at least once and the memory(s) that you are trying to save has/have been re-stored before. It's not that difficult.
Top

You have been a big help and gave some great info. I have been hesitant on removing the battery cable on this car for unfounded fears of losing memory to some of the systems. I am aware that the throttle is wireless and there may be an issue of the idle being restored to its factory setting and may require a scan tool. Mine isn’t that fancy. But, a good point is made about the computer re-learning everything if the battery had to be replaced. This over-priced Datsun is the most sophisticated car I have worked on and I want the work done correctly. The owner is having the alternator changed out because of leaking power steering fluid that is going down inside the alternator and burning it up. So, I will be looking for a power steering fluid leak as well.
Top

I have worked on Ms that have been sitting for as long as 3 years, and once I get everything installed, they fire right up and purr at the correct baseline settings.

Usually it's the user-generated stuff that gets lost, but again, they are not too terrible to restore.
Key codes, TCM, ECU etc...aren't things that typically get affected. Messing with the throttle body is the most direct way to affect the idle.

Not to give you false hope on these, but I have often had my radio stations saved. The seat, steering wheel & mirrors are pretty easy to restore.


Again, my preference & experience dictates that I don't mess with any unnecessary fuses and/or fusible links.
Good luck, & keep us updated.
Top

Thanks very much for the info. I will see how it goes and will give an update.
Top

I began the process of removing the alternator on the owner’s M35 earlier today. I discovered the connector to the alternator was broken and a small zip-tie had been utilized to help keep the connector plugged into the alternator. Apparently the shop that replaced the alternator before had broke the connector and hurriedly took a short-cut in making a repair. So, I stopped my work and made the owner aware of the situation. To shorten the story the owner will have his Infiniti towed to my house and I will continue the work. I spent a few minutes looking for a power steering fluid leak. Right off I have to ask, Why does Datsun put the power steering pump on the passenger side of the engine? What am I missing? Does it have to do with the steering rack? The area around the back of the power steering pump and everything in the vicinity and down, including the alternator is soaked in p/s fluid. There is no evidence of fluid leaking from either the pressure line or the return hose, yet, until I can get the vehicle running and try to determine where the fluid is coming from. What do you think? I’m hoping for a simple fix like a loose fitting to the power steering pump.
Top
Post Reply
6 posts • Page 1 of 1