Looking to finally start the restoration of my 1960 Datsun PLG-222 so if you know someone with an early '58-'61 Datsun 200 series sedan, roadster or truck let them know or just check in to see how this one goes.

For those of you who slept through US History 102, that's the Civil War through modern times (at least it was when I was in high school), George Wallace's 1968 presidential running mate and the USAF fire bombed Japan....relentlessly, then two big bombs later Japan capitulated. Shortly afterwards the American Caesar occupied Japan and began the arduous task of rebuilding a devastated and non existent industrial base. And for this reason many of the earliest Japanese cars were copies or near copies of some of the least desirable automobiles ever produced by the British. That's right, the Brit's Austin A series to be exact, as the huge American cars of this period were, well, just to big and resource intensive to produce and work in Japan. Knowing this is half the battle of restoring any early '60s Datsun as many BMC parts work, though there are a some minor differences that I have expensively discovered along the way. So let's get started.....

Here is it, sorry for the bad pics, all I could find from 3+ years ago.

Here's the good -
Rust free and original sheet metal and body panels, though the battery area does have a little cancer that needs to be fixed.
All good glass - not a crack, pit, or chip.

Matching numbers - that's the frame serial number and engine serial number with the data plate
Original "Dallas Cowboy" colored seats under the red vinyl.
Pretty much complete minus a few things below.
Engine is an E, just an E an not an E1, but a rebuild is easy
Transmission - it a 4speed column shift, but basically the same as in a 320, so seals and gaskets are no problem.

I could definitely use some help with these missing parts - thanks.


The Ugly -
The brakes...what a disaster. Who ever thought this was a good idea???? More on this in an upcoming post. 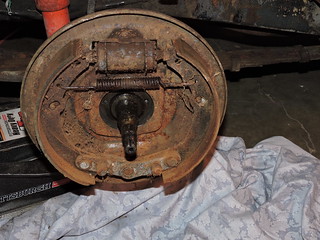 Suspension - yeah, not familiar with the front reverse Elliot I beam front suspension system. But LMC (that's Long Motors Corporation) is just around the corner from Victoria British, down in Lenexa, KS. So hopefully we can find some compatible parts from the earliest Chevrolet and Ford 1/2 trucks.

So let's start the research -

From browsing around we find the PLG-222 has the same underpinnings as the sedan 220 sedan (and probably the from the front door forward for body and sheet metal)with continued common parts usage with the later 221.

So tracking a different frame between the 222 and the 223/320, but I want to say this is due to the front suspension and not necessarily due to changes in the dimensions - more research needed, but I think my parts 320 frame has the front frame welded up for where the 222's reverse Elliot suspension would go, so let's have a look....

So initial assessment is probably wrong, each model - 222,223 and 320 all have different specs for length and wheel base which means each has a different length driveshaft...hmm...but no serious concern here.

So let's look at the different engines

Both of the 220 and 221 sedans came with the C and E engine. The 988cc or 1000 C engine with a 73mm bore and 59mm stroke and a single barrel Hitachi VAA-28 and the 1200cc E with a 73mm bore and 71mm stroke with dual throat Hitachi 2D-30C . Each, C, E, and E1, all have the same bore at 73mm so no issues with pistons or rings. And since the E and E1 have the same stroke, no issues with interchanging rods. From this I would venture to guess each share a common 3 bearing main bearing crank and block, main bearings, and rod bearings. Which translates to available parts for a rebuild - so far so good.

However, I have some initial concerns for the head. As Bent points out the E1 received carburation - a dual throat Hitachi 2D-30C found on all later E1s for the 320 and 410 and an improved head over the previous E. So what does an "improved head" mean? hmmm... Well we will see once we get here. In the mean time I'll compare the part # / stamping number on the top of the head to my other E1s and J13. Could be a change in valve diameter, but again, we'll have to wait for this.

and compare them to the E and E1 engine -

What we want to determine are the specific changes from the C engine as it transitioned to the E, if any beyond carburation and stroke, and then any further the changes from the E to the E1 not mentioned by Bent (to include the changes from the E1 MK1 to MK II, to the MK III and the final E1 MK VI with 13 cog cam, distributor and oil drive cogs that are not compatible with anything from BMC).

So doing a little reverse engineering I know the E1 is a close copy of the three main bearing BMC B motor found in the MGA and early Bs. With this we know the E has some commonalities then with the BMC B motor too. Now we need to research the BMC B motor and find what early MGs had a 988cc or 1000 engine based on the BMC B motor. Pretty sure, and verified, Nissan just increased the stroke from the C to E to E1, but with Bent's mentioning the improved head from the E to E1 we'll need to research more than just the MGA to find what other British cars had the BMC B motor as we might need to look at intake and exhaust valve diameters to see how they compare to those of an MGA/E1.
Top

I'll start reaching out to my sources - This is an AWESOME project. Wish I could take a month off and help with the disassembly, just for my own education!

Thanks Greg. Disassembly is about complete. Motor/trans are ready to be pulled. Only hiccup is how to remove the starter button on the dash

Will be back on today with some updates and more pics.

Okay time to catch up some. So over the past week the son and I made some real progress....

Did I say I was happy?

Oh well, so let's put "it runs" into perspective.

No ignition issues - cap, rotor, points, condenser, coil, wiring (all of it) plugs (okay, these are new) are still operational after who knows how many years of sitting idle.

Carburation, ran okay and strangely the dust inside throttle body disappeared...oops. In a later video (pay no attention to the "accident") we did pour fuel into the float bowl and the carburetor pumped fuel and we were able to rev it a little.

I know I don't have the best hearing, but all I heard was the nice mechanical sound of tappets going up and down. No grinding, no weird noises coming from the time chain, no strange knocking from the block or any other noises that would make me think we are on the verge of a catastrophic breakdown. And I think the compression reflects that all the internals are in working order.

That's not bad and actually pretty impressive with an even reading across the cylinders.

Shortly after the last short run the engine disassembly commenced. No major issues to speak of. There were as assortment of nuts, bolts, washers, and lock washers. I guess that can be expected from a 55 year old little truck. Only issue encountered the removal of the temperature sensor in the head. The tightening ring/nut came out with no issues; however, the sensor itself required a little persuasion from Mr. Vise Grip. Otherwise not broken bolts, stripped nuts, no welding or helicoil required. So all in all and easy engine tear down so far.

We'll let you go. The son will be home in little bit and with the rain coming we will take advantage of the cool temps and pull the engine tonight.

I'm sorry, what's that? Is it Metric or SAE Li'l Truckie?

Motor is stripped down and ready to pull, but prior to grabbing the son for some help we needed to "prep" the engine and transmission. I do not know whether this is in any manual, but I have added a few "procedures" above and beyond those in the manual when working on my fleet of early Datsuns and are as follows -

-Put transmission in neutral and check ever so often to insure it did not get bumped or place back into gear.
-Set engine to TDC for the number one cylinder, verify this with the position of the rotor, pull distributor and take picture of the distributor cog position and later with the engine still at #1 TDC take picture of timing chain, crank and cam gears (we'll add this one later) - like so -

-Remove fan blade before radiator
-Drain and flush all anti-freeze from block otherwise it will go everywhere and you will track it into the house.
-Have son or someone else drain the oil from engine and transmission because I always forget

-Tag and number spark plug wires and remove distributor cap - remember they do not make this one anymore!
-Take pictures of everything! Before, During, and After. Also verify pics and save in several locations!
-Finally - THROW NOTHING AWAY! I thought I could order new inner wheel bearing for my one 320 - wrong. Federal Mogul's part is incorrect so now I'm out an inner wheel bearing.

Well that's about it for my "special procedure list." A couple of these are extremely important for the rebuild as I'm finding a mix of metric and SAE nuts and bolts. Additionally, very few of the nuts and bolts are matching, it's like someone went through their coffee can of leftovers and just found something that worked. Needless to say I'm a little nervous - are the bearings SAE like the 320 and BMC B motor or are they metric

Well that's about it for now. Engine and trans are ready to be pulled.

Hi, I just got a 1960 pickup Datsun truck
I would like to get in touch with you, please send me an email [email protected]
Thanks
Top

Hello everyone, a little late to the show. I just got a 62, I was under the impression it was a 320 being from 62 until today I saw that the 223 was sold in 62 also.
Here she is, I am still deciding on how far to go with the restoration.
https://photos.app.goo.gl/8a6XXsmAhCbZEw4E8
These are from day 1, it has since had a bath some deep cleaning, plugs/oil/filter/compression test (OK)
Running pretty good.
Top
Post Reply
13 posts • Page 1 of 1

Return to “Other Datsun Cars”