Welcome all and nice rides

I spent a good month and a half evaluating the usual culprits before getting the Q70L. Beautiful car, great engine and excellent interior.
Top 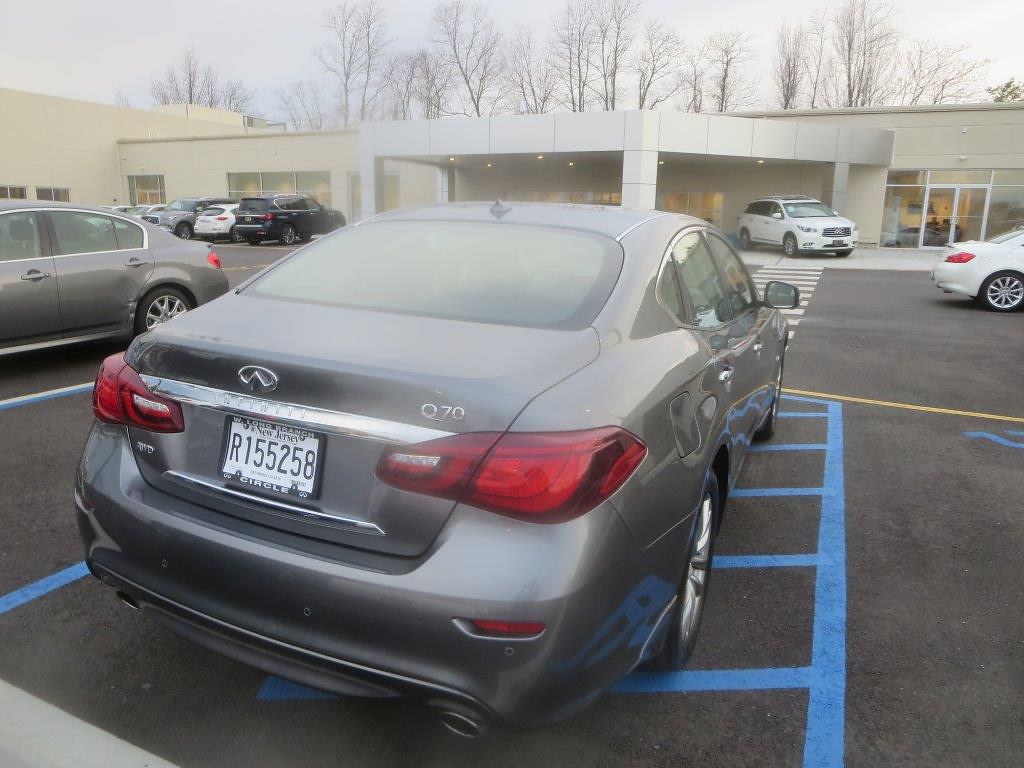 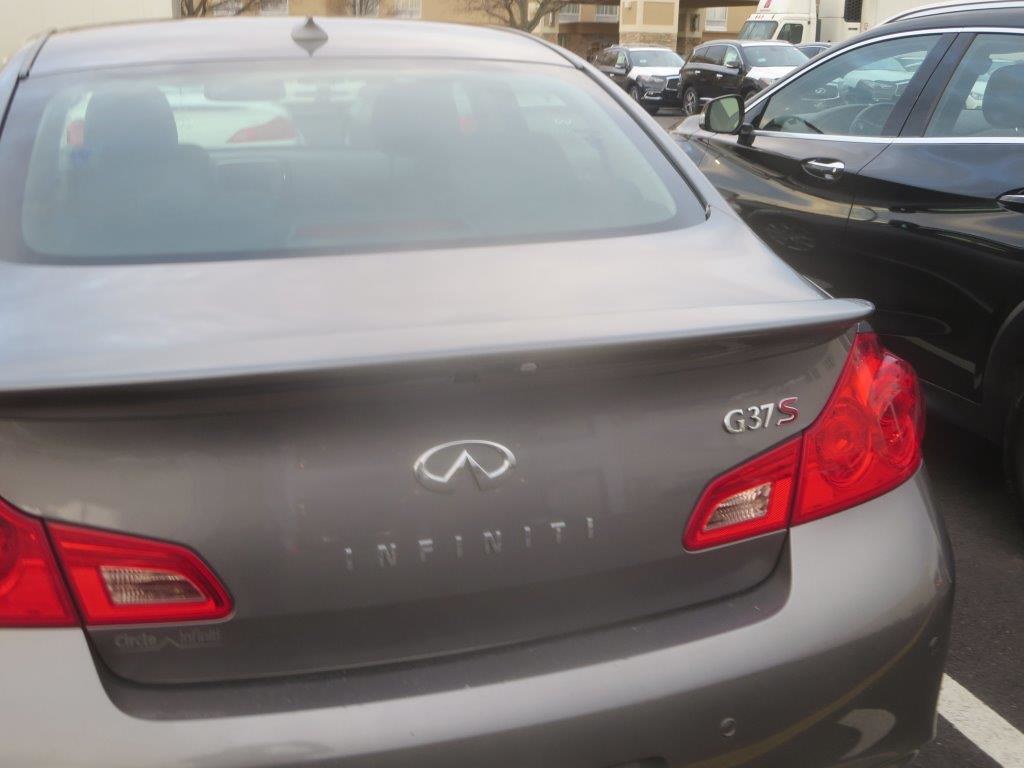 Another NJ member, nice! Welcome to the forum!
Top

Starting to get some pics up, am I allowed to link to another site?

(it's my own photography site)
Top I've owned it for 5 years and it's been a great car. Mods were all done within the last year. It's paid off, so way cheaper to fix her up instead of getting another car payment.
Top

Finally got to wash and take pics of my 2012 Infiniti M56s. Had for about a month now. Have 58k miles Hey Guys,
I'm Kay (or gtech) and I am new to this forum. I have a 2013 Infinity M37, its a beautiful white and was my dream car. I'm super happy to finally have one! I can't wait to make her my own and unique.

It's bone stock but I've got Plans for her! Here's some Pics! 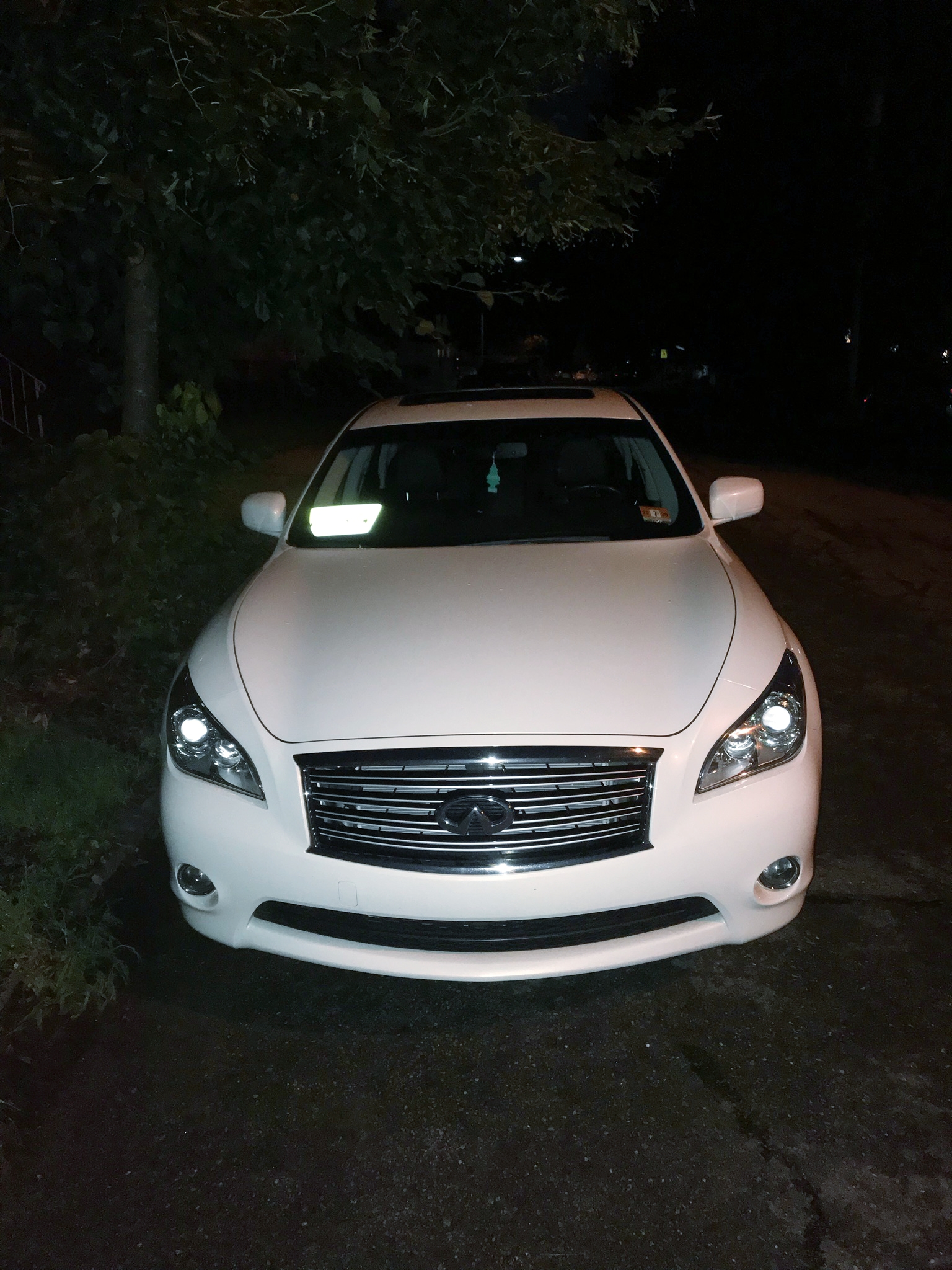 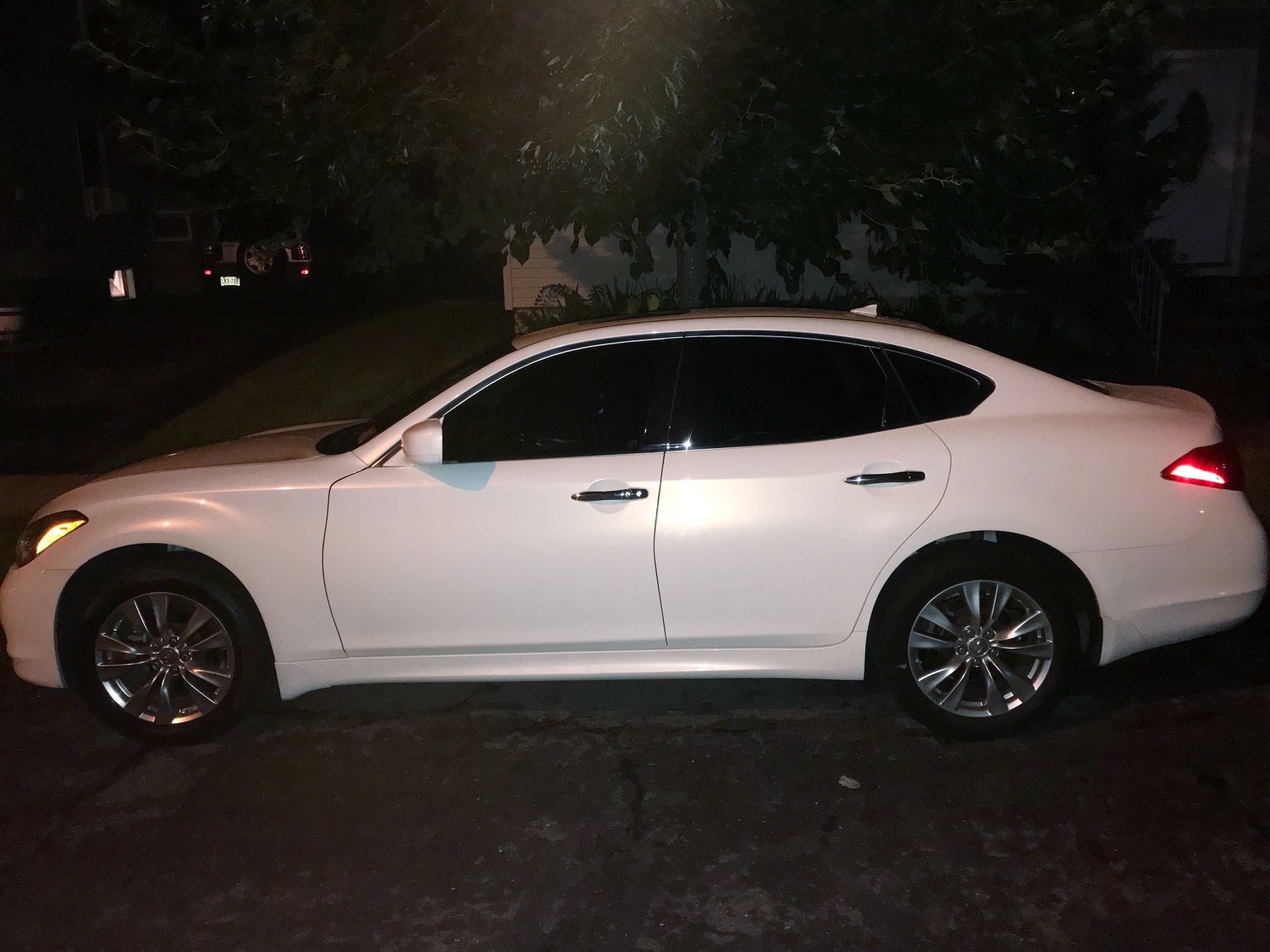 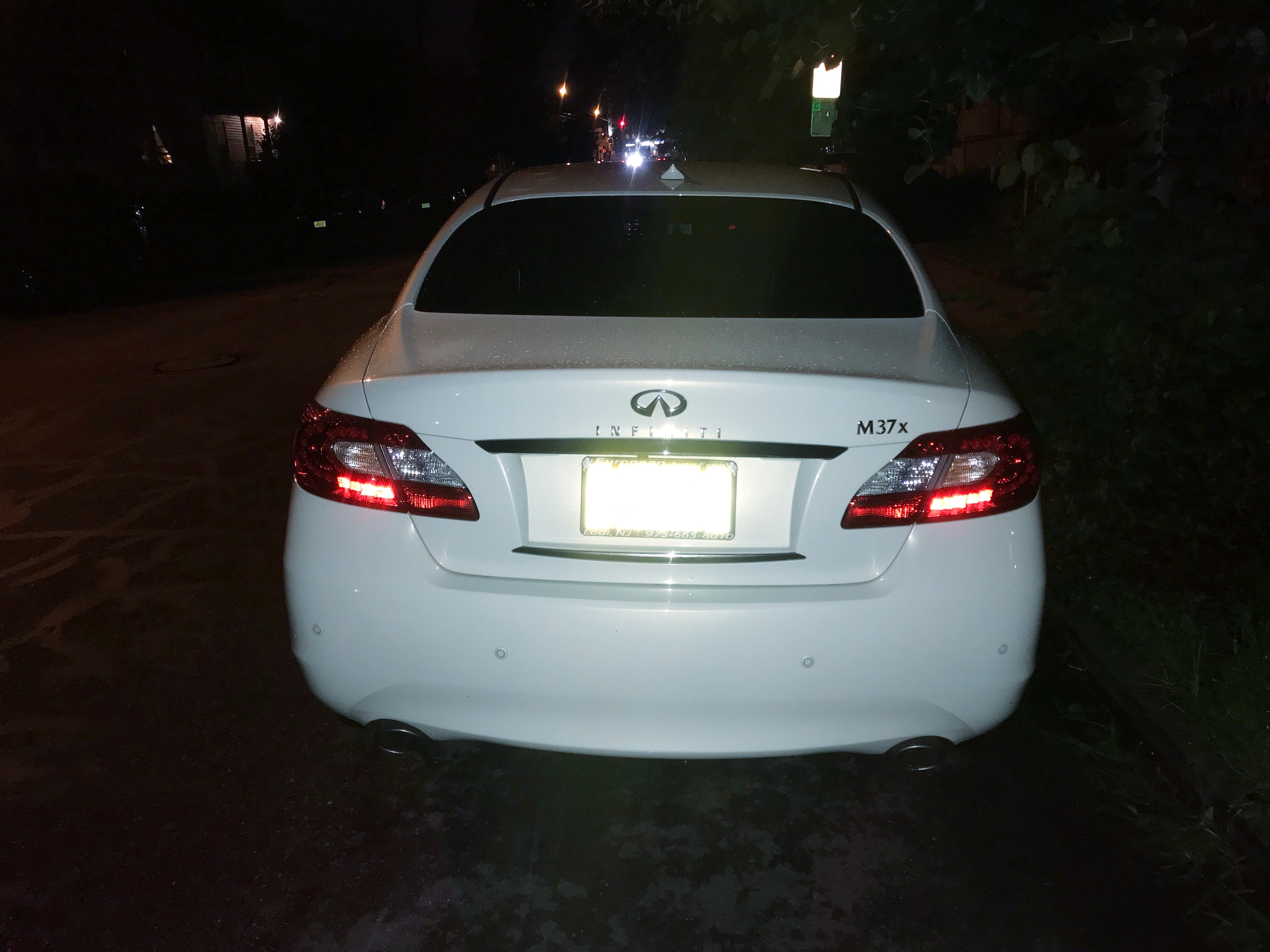 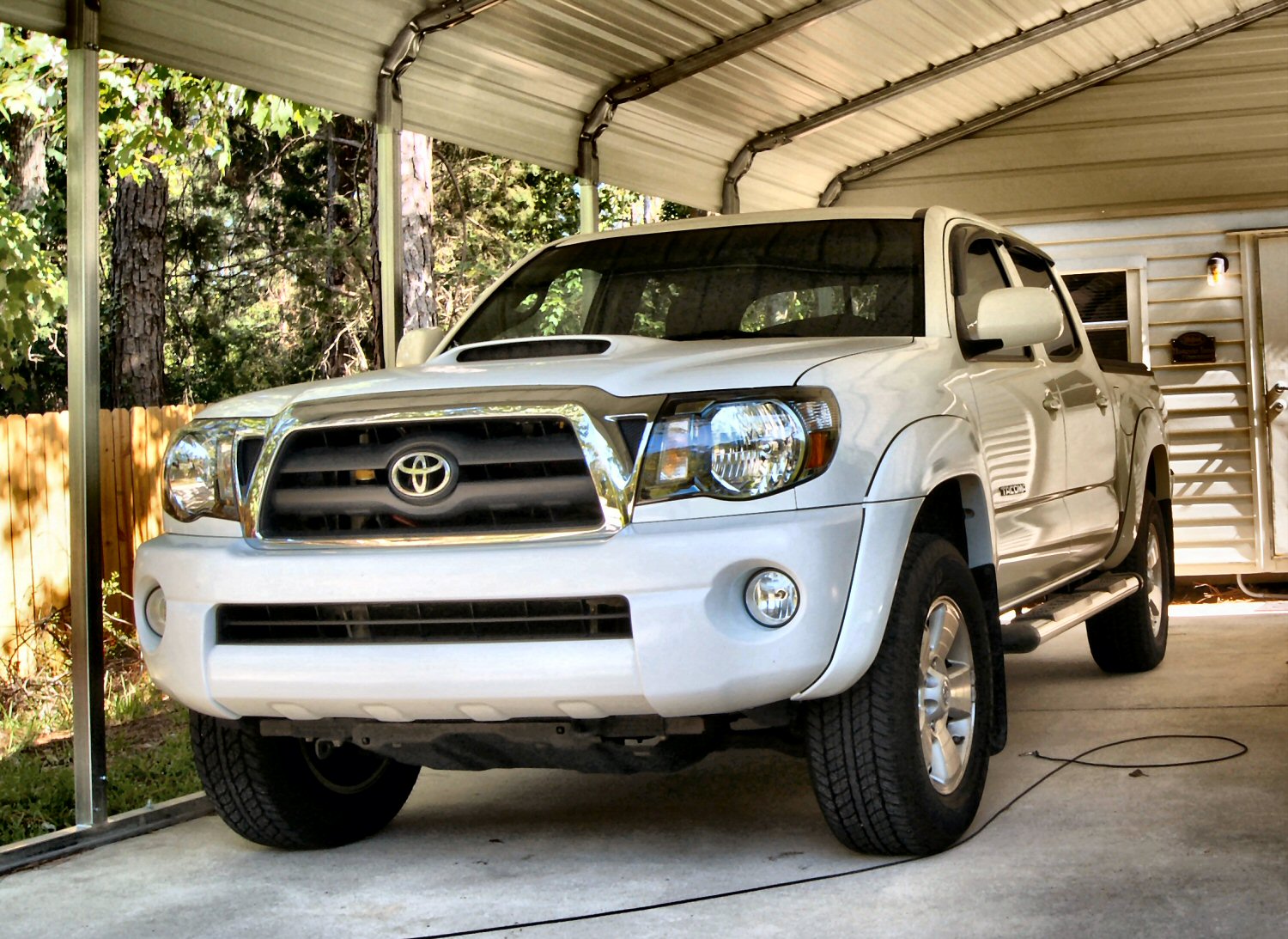 The M37 just looks like any other Aspen Pearl 2012 M37--I do like it a lot though--I do not have to worry about it's breaking each time I start it--the SL500, with just 63k miles on it, had gotten too expensive to maintain with some plastic or hydraulic bit breaking each time I drove it;and after a stroke in January I found I could not get in and out of the truck confortably (had to sell my Honda Silver Wing 600 too). THe M37 is just as quick as the SL500 too, Which despite 16 more HP and 100 lb·ft higher torque was a lardass at 4800 lbs. wet wit a driver...

Enough about all that though; I though some here might be interested in a couple of online "calculators", revised from my "Mustang and Miata " days of 15-20 years back: the first charts how the M37 (or 56) theoretical top speed(s), it shows speed v. engine rpm in each gear assuming the engine could produce sufficient HP to attain that speed. 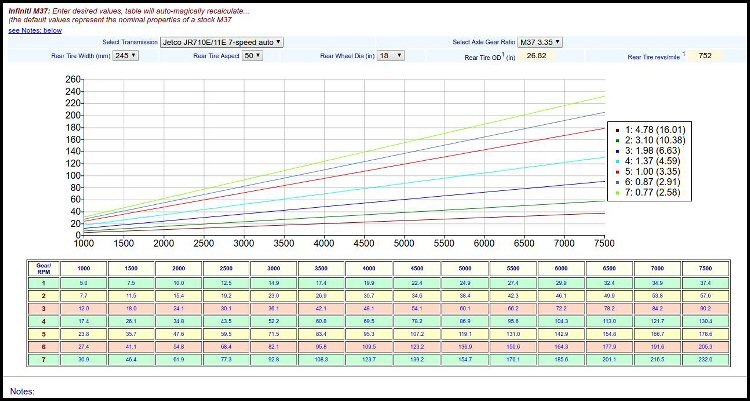 Here is another that calculate how much horsepower (at the wheels) would be required to push a M series to an indicated speed. It is based on the vehicle being locked into 5th gear as that is the gear in which engine output and top speed are most likely to be in alignment (for an M37). THe column labeled "RPM (JATCO 7-speed in 5th) 3.35 - 2.61" displays the engine RPM at the indicated speed (1st column) for the M37 (3.35:1) and M56 (2.611:1) final drive gears and the tranny being in 5th gear. 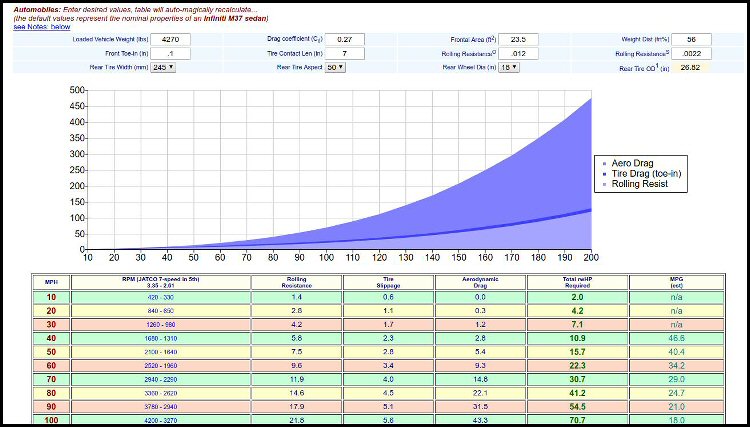 Many assumptions and assertions are made in the vehicle description" input section--I have based these on data from the web and other sources. However the formulae behind the calculations have proven themselves solid over the tears.

I would enjoy comments and feedback...
Top

Hello. I just purchased my first INFINITI. Many of my family members including myself have driven Nissans and are very satisfied. So I thought I give Infiniti a try. I chose a certified pre-owned 2015 Q70L because I found a good deal on it with only 17,000 miles. Also my kids were crazy about the customized look. I will Be posting questions about aftermarket changes I’m interested in. http://imgur.com/a/1bFfzGv
Top

New guy here....
Drove our new/used 2015 Q70L home last night. (Sorry no pics yet).
Pearl white over Graphite, Sport pkg, kick plates, illum. int.
Been 20 years since I had a Nissan product in the family, but I'm pretty impressed so far.
Top

Hi,
Downunder37 from Auckland, New Zealand. I have just imported a 2011 Nissan Fuga 370 GT from Japan, champagne over black, and it is a fantastic car. Nissan NZ does not offer this model here. It corresponds to the Infiniti M37 in the US, i believe, hence I'm on this forum

Looking forward to going through the posts to get to know my car and you guys better.
One downside to imports from Japan is the control buttons and the display menu is in Japanese, but,with your help, I'll find a solution.
Cheers! 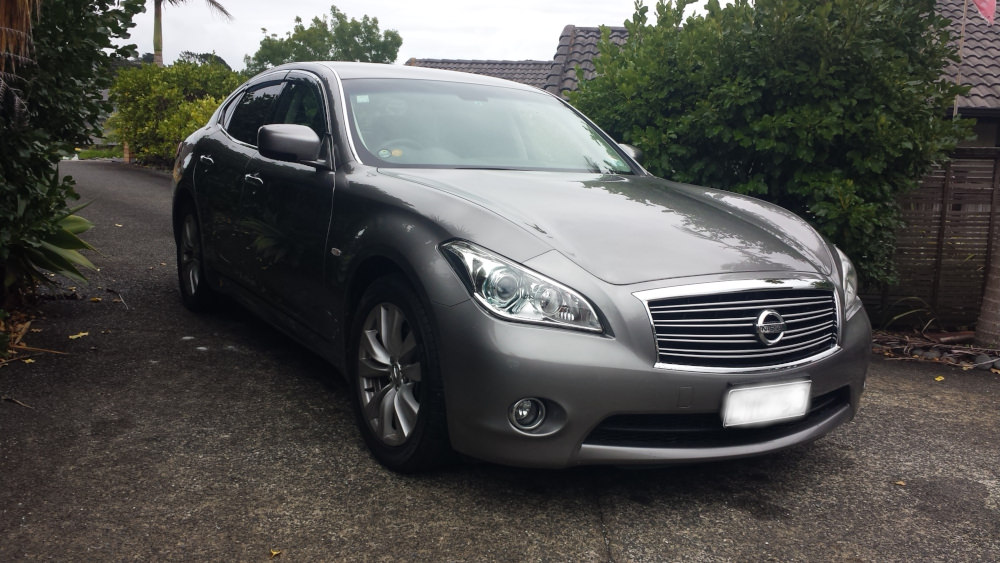 Previously owned an ‘08 G35S 6MT in Liquid Platinum- up till earlier this year. Love that car and looking to buy one back!

I’ll upload some pics if someone can tell me how LOL!

Hi. My name is David. I just join the forum. I have a 2012 M56S that I simply love!! I plan on getting the K&N FILTERS, and the HPS air intake tubes from CarID. That should probably give me 400hp at the rear wheels. Has anybody out there been able to pull 500hp? If so how?
Top

Hey everyone, glad to be back. was on here before when i had my 2006 M35 Sport, ended up trading in for a Chrysler 300. After regretting that for a few years i am now in a 2012 M37x. It feels sooo good to be back behind the Infiniti emblem.

I will upload pics soon as the ride does not look the best in -35C weather. Gotta love Canada.

Glad to be back.

Hey everyone
I’m Chad from Texas ! DFW !
Been browsing for a while and just figured out how to post pics ! Would like to meet up with anyone in the area wanting to have a car club.... But this is my M37 .. Will be adding more things to it soon... Joined the forum last month, this is my 2nd Infiniti. I had a 04 QX56 from 2006 until 2015, and wish I never got rid of it. I picked up a 2015 Q70L 5.6 in January and have not had a chance to really let loose on it yet due to the fact that I have an insurance company monitoring device for the first 90 days, 50 days left and counting. Ive been looking at the 5.6's since they first came out. Just wanted to post a quick intro and say whats up.
Top I love this car. What can I say. Have a couple ideas of what I want to do it to really personalize. Looking to you all for some guidance in that area.
Top

I joined NICO SEVENTEEN years ago when I had my S14 240SX. The 240 is long gone but last night I bought a Platinum Graphite 2012 M37X, and am back on here. No fancy pics yet, just the first one from the dealer lot. I was dead set on a Lexus GS but the M won me over. This is supposed to be a practical driver besides my Tundra, but most likely it will end up pretty modified. I already have parts on the way for it.

I am finding that aftermarket parts and information are much less abundant for the M than G or Lexus, but hopefully this forum can help. There is a lot of crossover of suspension and brake parts between the G37 and 370Z, are any of these parts interchangeable with the M37?

My first priorities will be coilovers, wheels, tires, big brakes, and I already have a Sport bumper on the way. I need information on offset and rolling vs. cutting fenders for aggressive wheel and tire fitment. I also noticed there are staggered width setups on these but with AWD I am sure overall diameter is critical, so I am considering the biggest square setup possible.

Still has paper plates, but a big pile of parts is going on this week.
Edit: I must be getting old. first I buy an AWD M37, then I can't figure out how to attach or embed an image

Hi everyone, and Happy 4th for all us traitors to the Crown. Been a lurker here for years, since before I bought in to the scene (and a big thanks for all the great info here which helped convince me that going with a M was a great move!), and I wanted to say hello and all that before anything broke and I needed to ask for help!

I bought a 2012 M37x in March of 2017 with 30k on the ticker. Deluxe touring package and, specifically, not the tech package as I didn't want all the driving aids and the costs associated with them (really surprised the Adaptive Front Lighting system seems to not be a failure point). Also wanted to avoid the S as it looked to me like that rear end would be trouble (although the two tone white/black interior that was available in the S was sooo nice!). I live in the sticks, so the 'x' made sense even if I am more of a RWD kinda guy. Didn't get my desired Java interior - drove one with the tech package and loved the interior but hated the tech (can you tell I'm a tech guy?) - had to settle for the Wheat (and still had to drive 200+ miles to buy it!).

Two plus years on the clock and 32k added to the ticker and I have had to replace the (original) battery, new treads (Yoko's - pretty happy so far) and do a brake job. That is it. Of course copious oil changes as dictated by the manual.

Excited to be a more involved part of the scene and again, THANKS for all the help over the past few years. 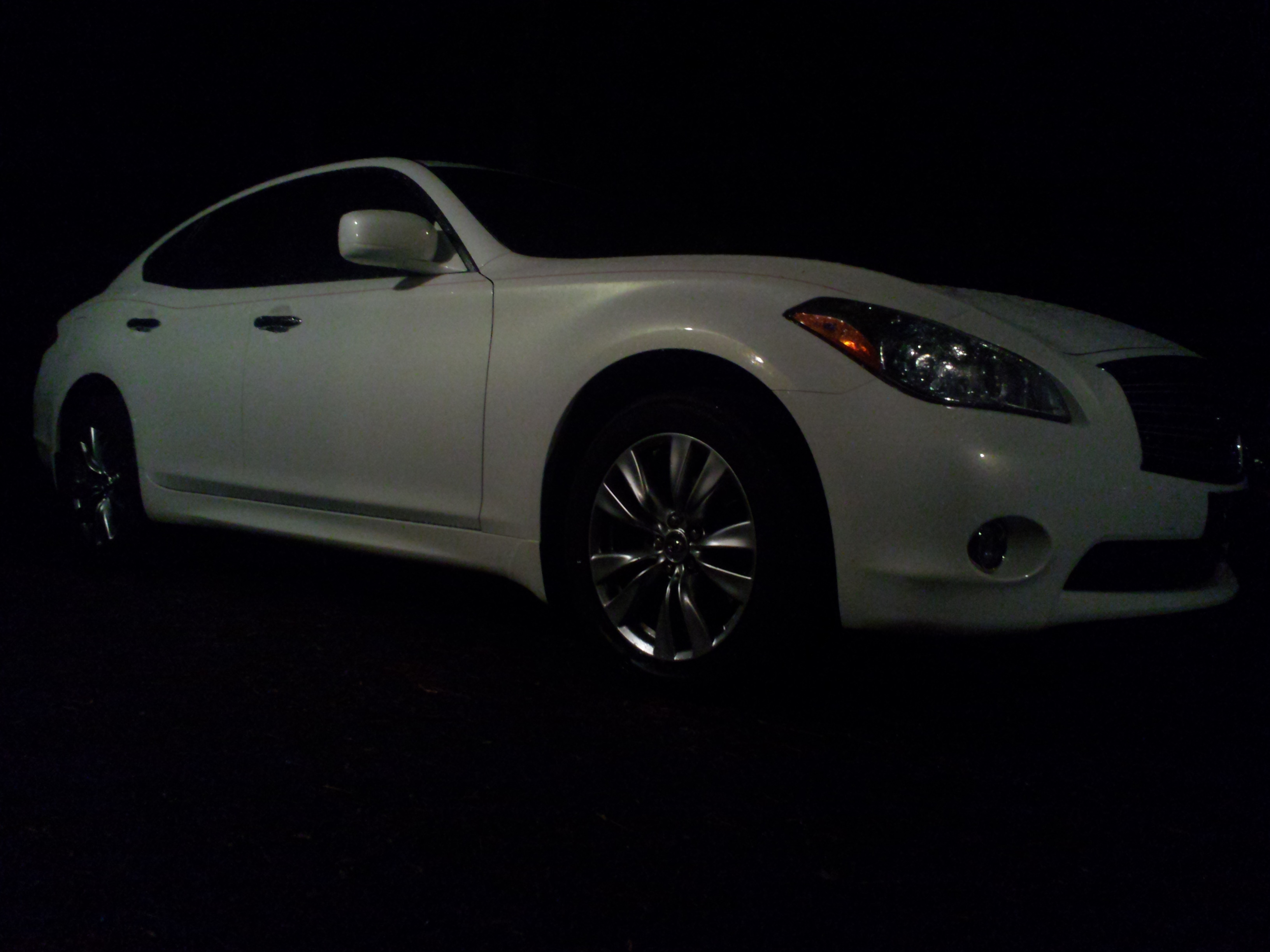 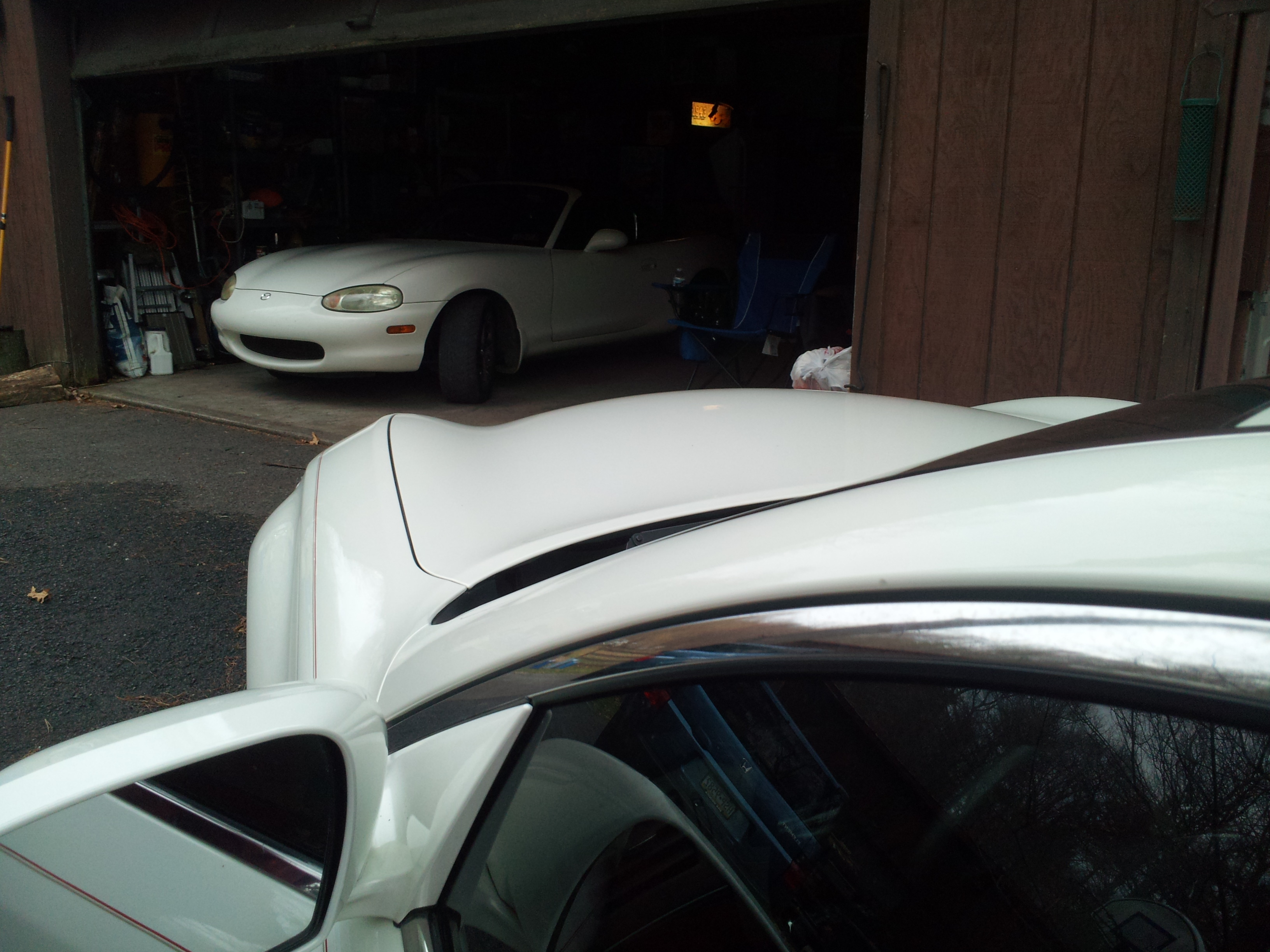 (a resemblance of sorts?)
Top

Been here often on for quite a while. I enjoy all of your insights and posts. I have to say that these cars are amazing. Here’s mine. What is the offset of your wheels?
Top
Post Reply
447 posts