So today an embarassig situation happened when our 06 m35x suddenly lost power during a test drive. (car is forsale!) it was running perfectly fine until we pulled into my subdivision and all of a sudden it wouldn't pass 1k rpm. It would only move 1-3mph. A couple having a walk were faster than us. The VDC off and "slip" showed on the gauge cluster.

When I got home, I disconnected the battery to reset the computer and cranked it back up. Everything was normal and te lights went away.

Could this be indicating that my brake pads are low? Does the car just cut off power? I checked te fluid and it's full. (that's what my search results came up with but I didn't read anyone loosing power)

Sounds like your car went into limp mode to protect the engine.

This has nothing to do with your brakes... I'd be more concerned about the engine. You should probably have it checked or at least have the stored engine code read to make sure it's nothing serious.
Top

Probably the engine sensor. Check for code then post here. If it's the sensor than it's an easy fix. Both part and labor are minimal.
Top

A bad MAF caused the same thing for me. Pull the codes.
Top

nissan789 wrote:Well of now I unplugged the battery and restarted it and it's running normal again with no codes

Same thing just happened to me yesterday, July 30, 2012! I posted on my Facebook group but hadn't got around to posting up here...

At 70k about a month ago light went on and before I could take it to AutoZone to run the code, the light went off!! Car was running fine the whole time (about two days).

Yesterday at 72.5k my "Service Engine Soon" AKA CEL goes on along with the VDC/SLIP combo and shuts down while driving... I followed by turning car on and only CEL stayed on and car returned to running normal!! Today I took it down to AutoZone and got the code read giving me P2138 APP Accelerator Position Sensor!

After reading up quite a bit I have found that the sensor could be open, on it's way to going out, or out already... I have taken some precautionary steps and reset my CEL off to see if light stays off and doesn't return!! Checked accelerator position sensor connection, depressed pedal down many times all the way to the floor and back, adjusted my floor mat to where it wouldn't move on top of accelerator pedal when I turned car off... I also filled gas tank because I had left it on empty (with light on) and parked for about five days without starting it!!

And that's it... For now, light had stayed off and hopefully stays off!! Possibly my sensor was staying open since my floor mat would rest on top of the pedal from time to time (from what I had noticed)

Wierd. Well we havn't driven the car much. Only 3k for the past year. It has 120k miles now. I'll check my floormats since I have 2 mats resting on top of each other. Where is the throttle position sensor located?
Top

nissan789 wrote:Wierd. Well we havn't driven the car much. Only 3k for the past year. It has 120k miles now. I'll check my floormats since I have 2 mats resting on top of each other. Where is the throttle position sensor located?

Mine was reading only one code p2138 APP accelerator position sensor, not TPS. The APP is located at the top rear of the accelerator assembly (gas pedal). You can disconnect it and check connection for a bad connection... I did not completely disconnect it but fiddled with it a bit making sure the connection was true. I depressed the pedal and released it firmly with my hand many times as I was down there checking the connection to the sensor. That and clearing the floor mat from a top the accelerator pedal is all I've had to do at this time...

What code or codes are you getting??
Top

I currently lights what so ever after rebooting the car. I will hook up a code scanner anyways
Top

We had a P2138 last May. There was a sudden loss of power and a SES light. We limped it home, I pulled the code, and rolled the dice on replacing the APPS without doing actual thorough diagnostics. IOW, I threw a part at the problem. I replaced the APPS myself. I didn't have time to shop around and get the best price on the part, I just bought it at the dealer the same day.

It took about an hour for me to replace, including taking pics. If you knew what you were doing, it could be done in a lot less time. I'm just now getting around to posting the pics, six months later

The replacement APPS. The part you put your foot on does not come with it, but everything else does: 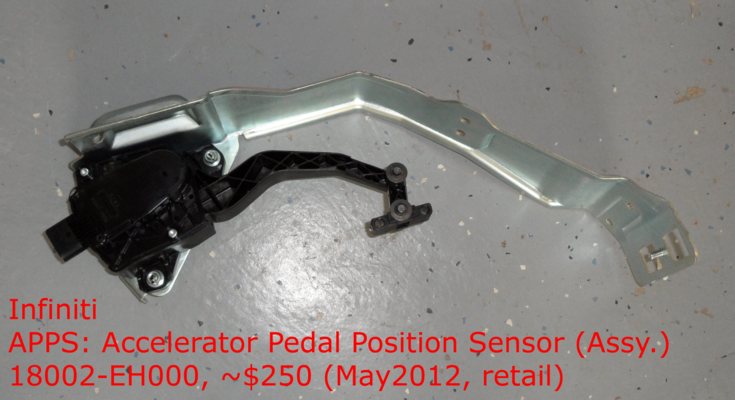 Pry up this cover: 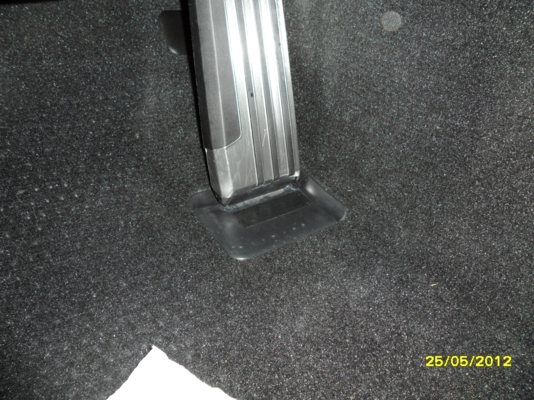 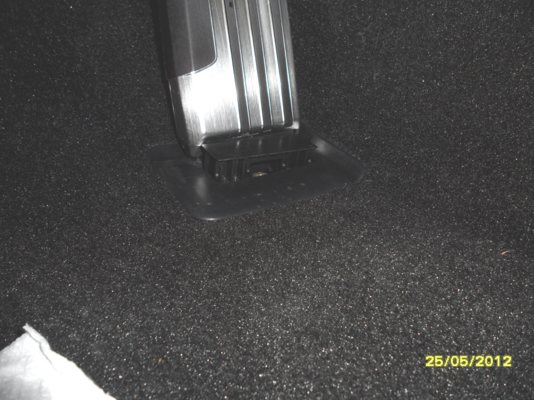 Remove the 10mm nut below: 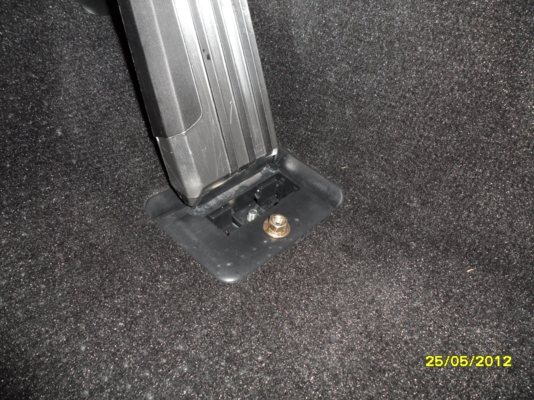 Next is the tricky part: removing the two plastic pins that retain the pedal to the link. Unless you know what you're dealing with, you'll break it (as I did). Fortunately, the part the breaks comes with the new APPS.
Use needle-nose pliers to squeeze the end of each pin. IIRC, the part needed to be squeezed on mine was facing the right side of the pedal, and I assume that bent-nose pliers would have been necessary. 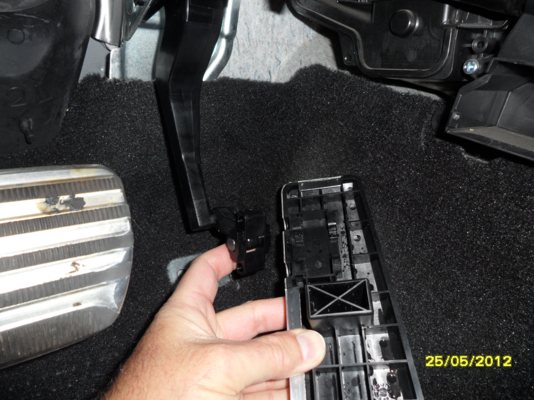 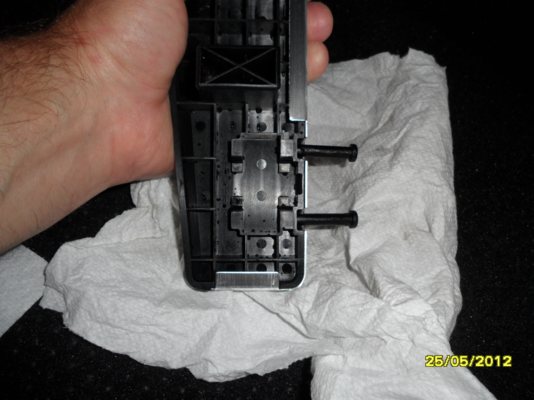 I broke my link before I figured out how to remove the pins: 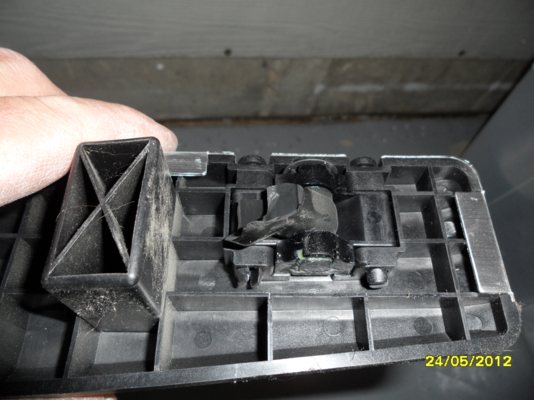 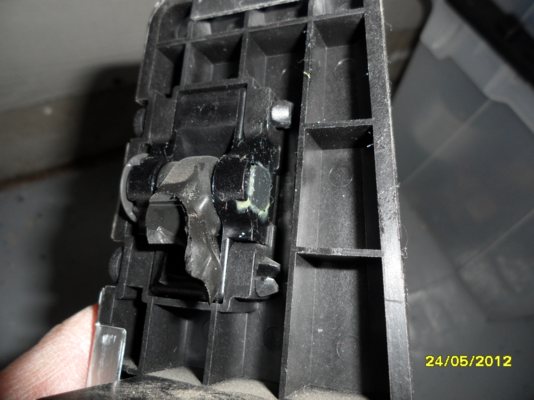 Better pic of the pins: 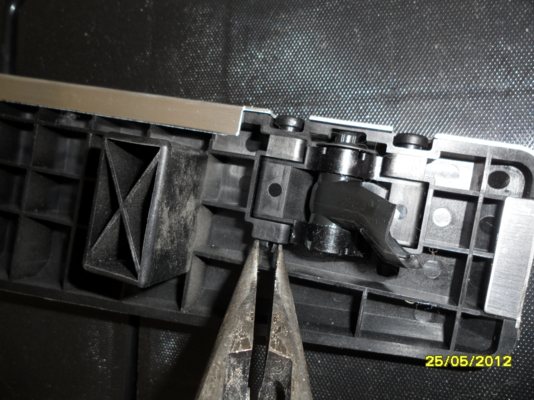 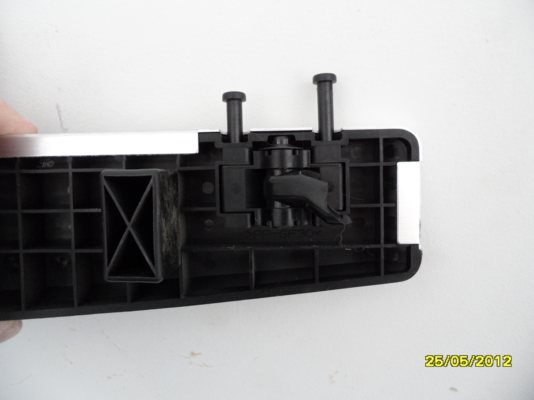 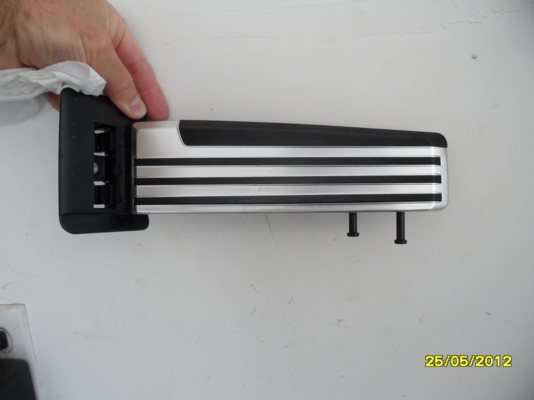 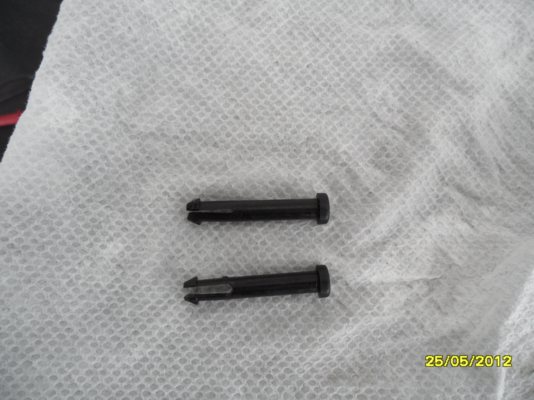 Jumping ahead of myself, here's the pedal with the new APPS: 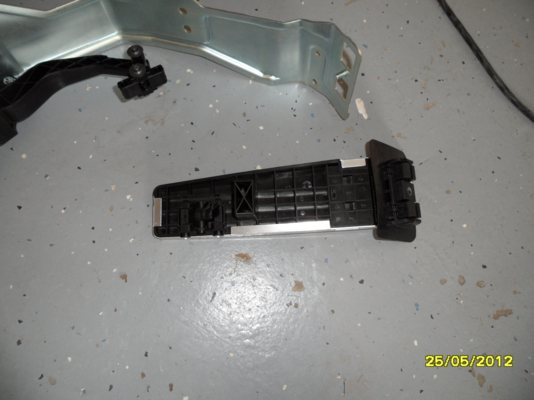 Remove the vent from the left/upper side of the tunnel: 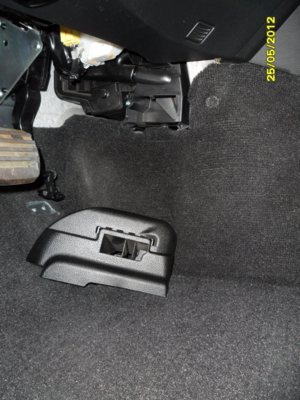 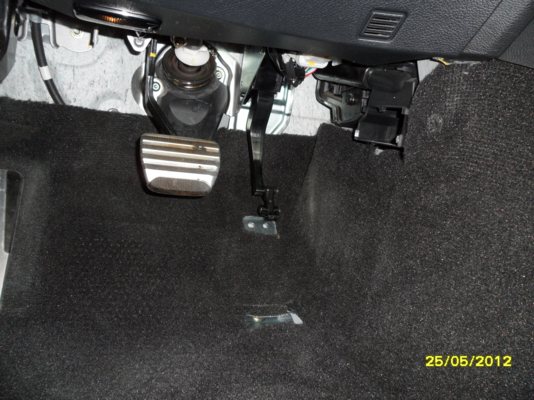 Carefully pull back the carpeting to reveal two more 10mm nuts to remove, then begin manouvering the old APPS down. I admit, I cannot recall if there was one more fastener higher, but I don't think so. Once you've begun to pull it down, you'll have to snake your hand to the top of it and remove one cable guide/clip, and then disengage the harness from the APPS. 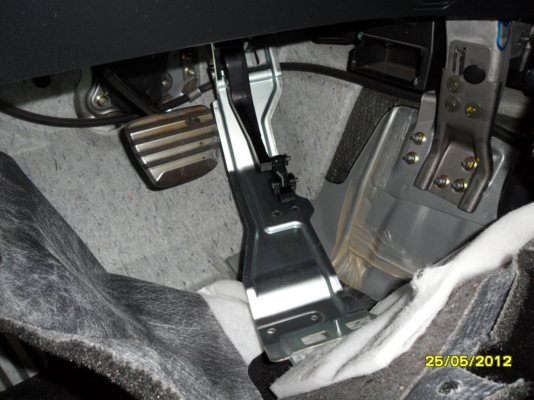 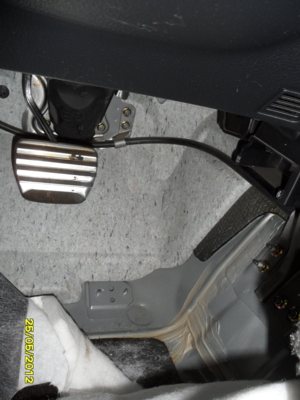 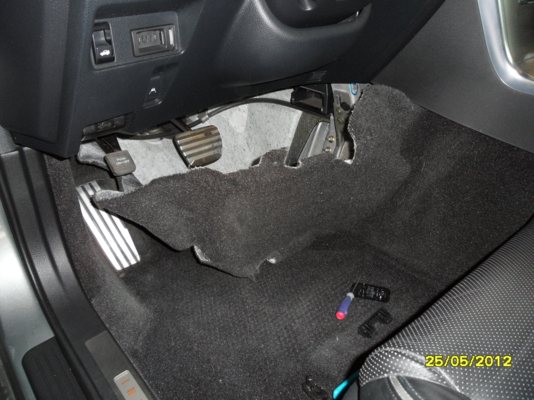 Installation is the reverse of the above. Reconnecting the wire harness and the harness guide/clip was the hardest part of that.

When reassembled, run though the re-train procedure (search for it) to train the ECU to the new sensor. I cleared the P2138, retrained the ECU, and never had a recurrence of the problem.
Top

this should be stickied as a DIY APPS replacement!!

It looks like there is one more 10mm nut higher up the bracket that needs to be removed, that I forgot. That's the problem with waiting so long to post 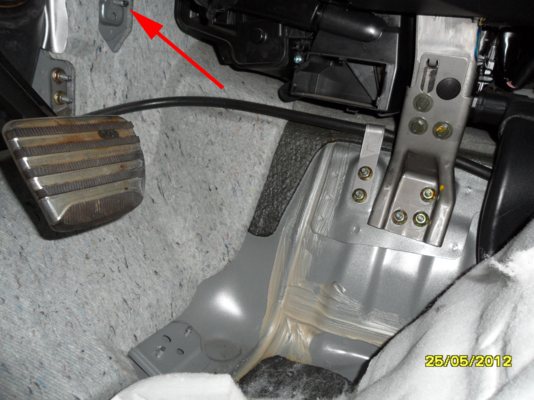 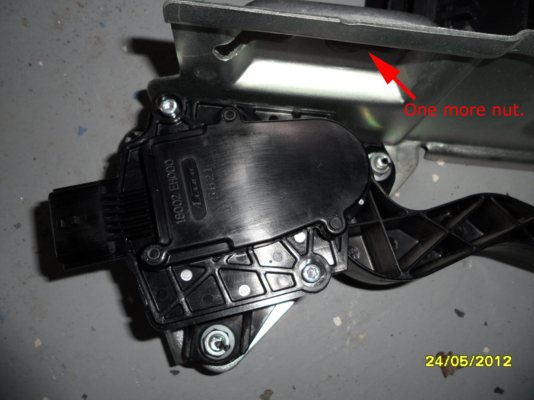 A couple more pics of the APPS. There was no visible damage to the wiper areas; I expected to see wear. 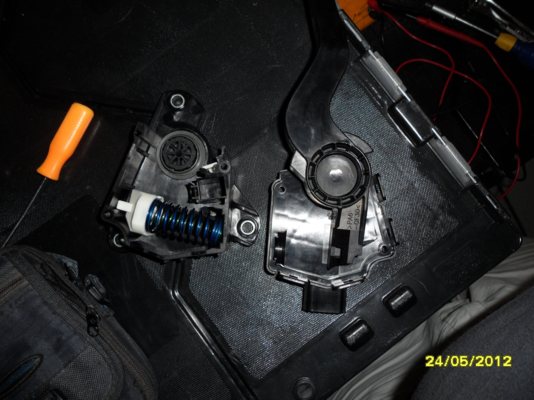 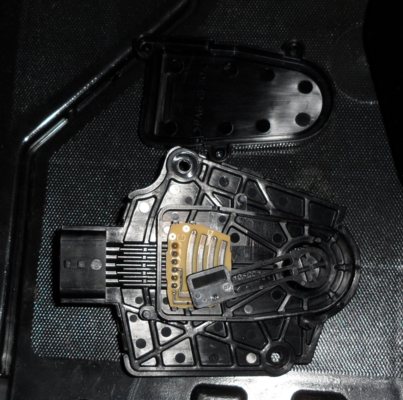 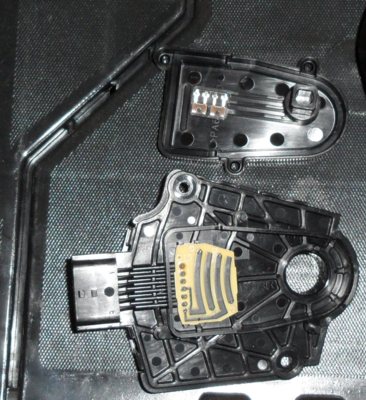 For the search engines: Replacement of this pedal assy. is most likely covered under NHTSA Recall 13V-430. We are getting a reimbursement from Infiniti for the cost of the pedal assy too. 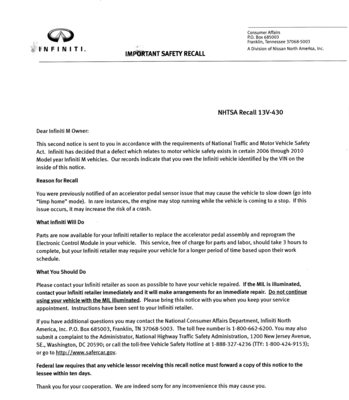