General discussion forum about the 240sx, and a great place to introduce yourself to the board!
Post Reply
132 posts

^^^^exactly what I was thinking. bastard....jk. lol. If you don't mind me asking, what do you do for a living? You mentioned being relocated, are you in the military? I have been thinking of joining the military so I can afford to have s*** like this so that is why I am curious.

This looks great though. Hopefully you keep the updates rolling in.

ps. I want your motor(like everyone else viewing this thread)

bllabong89 wrote:If you don't mind me asking, what do you do for a living? You mentioned being relocated

ps. I want your motor(like everyone else viewing this thread)

I assume you mean the RB and not the KA right? I sold the KA and tranny on Craigslist just days after I took it out for $450 to a guy doing a really cool slammed early nineties Hard Body project. The whole R32 front clip was only $3900 from Tiger Japanese six months ago... 60psi oil press and compression in the 160's.

I got lucky with it too! It had Tien coilovers and a Greddy/Exedy/Nismo twin disc clutch set up. The best I can figure was the motor had been gone through not long before the car was cut up. Either that or it was out of a much lower mile car that had work done to it. The odometer read 135k, but the bearings and crank show nearly zero wear, the cams have no scuffing or scratches, the front timing stuff as well as the oil pump look/seem new, there is no varnish or built up oil residue anywhere in the head or that I found in the bottom of the pan, etc... I'm still putting my new oil pump as well as front timing stuff & water pump on anyhow.
The only thing uglyish about it was the typical paint flaking off the intake. If this thing had 135k... it's a miracle motor! lol

Well it's unfortunately been fairly slow going on the project. I have managed to put in some time on it, just not as much as I would have liked...

Between moving to a new place this last month and looking for the place the two previous months, combined with some time spent on the GTR for the up coming NASA race... well, not much done to the 240.

Anyhow, time to post up a few of the pics I took the last go at it. Sorry the pics aren't of great quality either. All I had was my phone because the digi camera's batteries were kaput.

.
The above pictures show the passenger side trans cross member mount location. I made it just like the GTR was with the heavy hex metric nuts welded to the top side of the plate before it became a box around the frame rail. The previous posts show it's build I believe... .
Above is a few views of the trans cross member mount zig-zag piece under the drivers side (American driver's side that is).
. .
Above is a few more of the GTR towers. I'm not done with them in the least, I just hit the weld and grind areas with a rattle can so they wouldn't have surface rust to deal with later... We've had a bit of rain here in the Phoenix area lately & it's pretty nice really!

I like that I got to save and use the GTR tower to firewall gusset/strap too. All I had to do was cut an inch of length out of it and stitch it back together.

Lastly we have some pics I took of the rear drop horn for the engine cross member that is finally welded out
& the clearanced frame rails to give some relief to the axles.
. .
I used 3/8 wall 4" dia pipe for the material. The right frame rail relief is 1/2" shallower than the left due to the proximity of the pivot at the diff. Axle travel/swing is going to be much less on the right side. This should allow me to lower the car a bit further than would otherwise be an option. I added a 1/4" strap to the top of the frame rail as well as a 1/4" perpendicular to it which nests all the way up to were the bottom of the GTR tower begins. This made a nice heavy duty angle which will make up far any lost strength with the axle relief. This of course isn't even accounting for all the strength you get when the GTR cross member spans the distance and becomes part of the frame too.

Most of this was done with the big migger for burn in heat & penetration. You may see some undercut and low spots in the weld areas for now... but I'm going to go back over everything with the little mig with .020 wire & fill all of that, & then regrind everything smooth. My goal is for it to be really strong, which it is already, but for it to be smooth and clean, without having to use all the silly putty Nisan used to fill the ugly seems from the factory.

That's pretty much it for now. Next up, is the transfercase passenger floorboard sheet metal. I have a piece rough cut but still need to fit it and get it tacked in.
Last edited by Tofubadguy on Tue Jun 04, 2013 1:11 pm, edited 4 times in total.
Top

Wow, That is alot of nice work. Alot of nice Fab work. Cant wait to see this thing done. What are your plans for the R32 front end? (Fenders, bumber, headlights....)
Top

CJH wrote:Wow, That is alot of nice work. Alot of nice Fab work. Cant wait to see this thing done. What are your plans for the R32 front end? (Fenders, bumber, headlights....)

Thanks! Hmmm, the left over parts will be saved. The stripped floorpan & firewall structure willmost likely get parked out back on the North 40 or whatever, but anything & everything that will unbolt and can be stored I'll keep for this thing...

Before the K-sports and Rota's 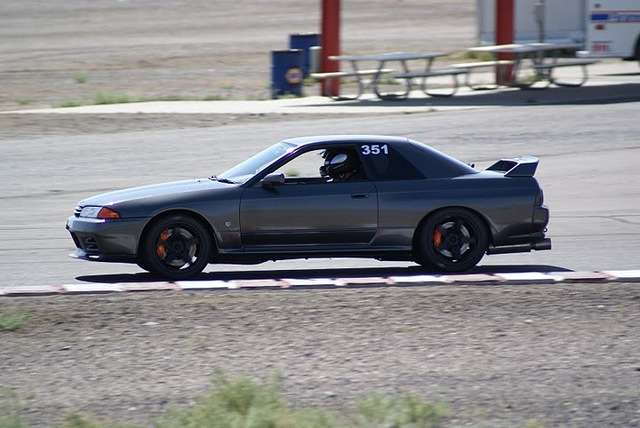 Never know what you'll need till you need it.

Very nice. I cant wait to see the s13 come together more.
Top

This build looks interesting. I'll keep tabs on it.
Top

your build is awesome

it nice see somebody else from AZ
Top

How do you like those ksport brakes on your 32? I was looking at their kit awhile back for mine. Awesome build you got going keep up the good work.
Top

also that track r32 is sexy

nissans13240sx wrote:How do you like those ksport brakes on your 32? I was looking at their kit awhile back for mine. Awesome build you got going keep up the good work.

Thanks for the compliments again guys...
The K-Sport brakes are very nice! I can come up to a turn much faster than before, and I know the brakes will be there.

I probably mainly just needed some high temp brake fluid with the stock brakes before and that would have helped bunches towards the end of eack stint on the track, but I figured might as well get what I expect to get anyway someday.

Geez that's a lot of work... you must have a screw loose!
louvers eh?
Keep up the good work!

b- i have to differ with you on the 33's design. i think it was the best looking one so far(sans the r35)

-iam sure you have a hookup for getting this inspected.
Top

MattS13.5 wrote:Geez that's a lot of work... you must have a screw loose!
louvers eh?
Keep up the good work!

So, I got my floorboard piece fabbed and welded in finally... 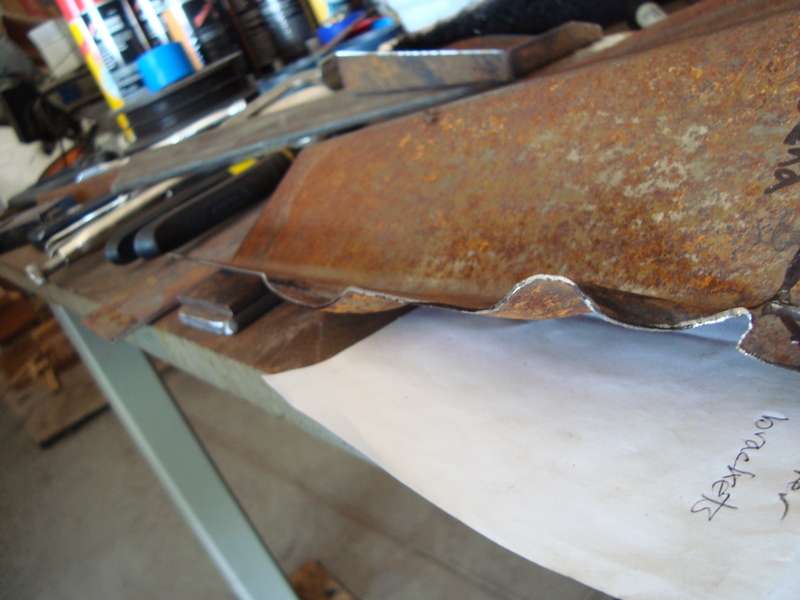 The new shape is super solid and really strong. I still have to take the grinder with a tigerpaw to it and smooth the seems out but that will only take a few minutes this weekend.

The only thing I didn't like was a R32 GT-R had to be wrecked for that clip to come to you, I doubt it was from a perfectly fine car before it got cut up, probably a nasty side impact or rear end collision.
Top

Skyline_BNR34 wrote:probably a nasty side impact or rear end collision.

I think it was something like that. On both sides of the clip at the cut line, the frame rails were folded inward, wrapped over the brake and fuel lines and pinching them to the floorboard. The tranny hump was a little squished narrow and humped up in the center a bit. Either crashed or treated really poorly by a forklift. I'd guess the first.
Top

More updates on the car! I love this thread can't wait to see this thing done
Top


I LOVE the fabrication work, mindblowingly clean and i love how you talk about your work on it like its nothing. that kind of confidence is a prerequisite for this type of project. just the "we will do it" attitude, not "ah, another roadblock, WAAAAHH" deal.

) but i will check back in JUST for this thread. hot damn!
Top

) but i will check back in JUST for this thread. hot damn!

thats why we dont ever see you anymore. we miss you man

) but i will check back in JUST for this thread. hot damn!

thats why we dont ever see you anymore. we miss you man

once the M has coils, is tinted, and running tip-top, and I have a house, I'll be back with another coupe

doing big things before the small things... next S13 will be track only.

I miss roughly a dozen people on here. the rest, are idiots.

M5board, people talk in full sentences, even the ones who don't speak english as a primary language. They are mature, don't s***, and don't flame people much at all, let alone ever. It's the way forums are supposed to be. They don't care if your wheels aren't Work, BBS, etc, as long as they look good. No hate for "knock-offs" as long as the stuff works as advertised.

All said and done tho, I miss my S13's simplicity and the fact that I know these cars inside out. The M5 is a WHOLE 'nother animal, but a MUCH better/fun daily

"/highjack" Don't worry about it! 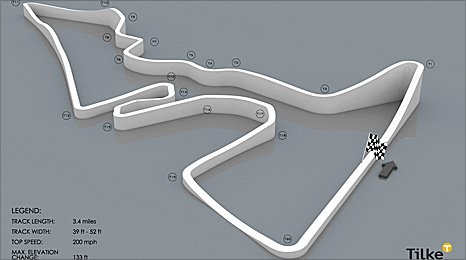 It's all coming together!

mrgreeneyes wrote: I miss roughly a dozen people on here. the rest, are idiots.

Although your coupe build was amazing. You sir are no better then the rest of these so called idiots, when you are prejudging people you don't even know.
Top

Need to update this!

Putting in the whole R32 GTR rear subframe now. It all lines up like a dream. I'll get e few pics up soon, but they aren't anything special. Just a rear subframe that is essentially a direct bolt in...

Next up, putting it all back together and getting it to a wiring magician. Running, functional, legal, then complete re-disassembly for roll cage, paint, suspension, interior, custom fuel cell, etc.. fit and finish .
Top
Post Reply
132 posts