Yes it can be done, is it easy, no.
You have to make a custom oil pan/oil pickup tube for the stock 720 IFS, if you have a straight axle under the front then it is easier.
The other thing that made me change my mind about my 4X4 diesel was that I didn't think the SD series engine had the power to push a lifted 4X4 down the freeway at freeway speeds, so I took the cab off the 4X4 frame and dropped it onto a 2wd frame, I do not regret that decision.
At one point it looked like this. 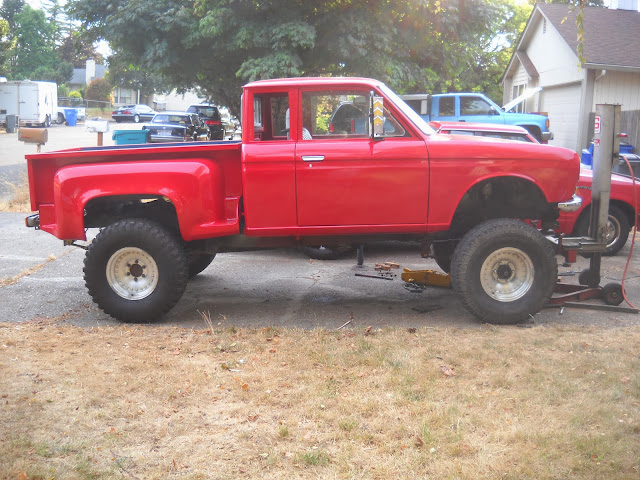 It now looks like this and has for years. 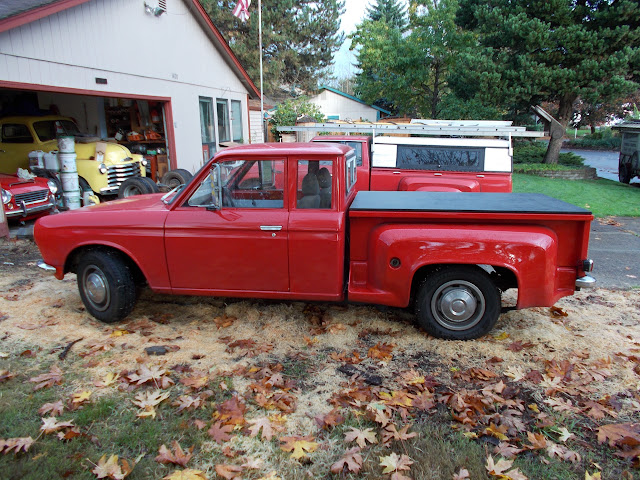 I have a friend with a SD22 diesel 4X4, whenever I ask about the power he gets this look, but says it is fine, I don't believe he can go hiway speeds without flooring it.
My engine is an SD25, I can hold 80mph on level ground, but only get about 28mpg going that fast.
Another thing about flooring it all the time is that the EGTs get high floored, eventually something will melt, I am so lucky I didn't melt mine a long time ago going up the grape vine hill north of LA, now I know better than to floor the truck going up an extended grade hill, 1400 degrees sneaks up on you fairly fast.
Australia got diesel 4X4s new, but we didn't get them in the USA.


Daniel Conkel wrote:I want to put a 720 diesel into a 720 4x4. I already have the trucks picked out but I don't know if the swap is possible. Anybody know 100% that it can be done?

Of course we didn't get the diesel 4x4s; don't want anything to threaten gasoline. I don't want to build a big rig with big wheels. I just want to swap the engine and keep the 4x4 stock. Is the diesel total weak sauce? Can one not solve the slowness problem by using a different tranny and regearing the differentials? Is the custom oil pan necessity due to axle clearance?
Top

The thing about the SD22 diesel engine is that it is only 61hp, it has torque, but torque don't get you down the freeway, hp does, the rear end gearing is very important, the 2wd with stock tires needs the 390 geared rearend, the reason is that 411s will rev the engine to high, and 370s are just at the point that the engine doesn't have the HP to push it down the freeway unless you have a very healthy engine.
I have 2 SD25 diesel powered vehicles right now, one is my 521 kingcab with 350 gears in the rear, it goes alright, until recently I thought it was awesome, but now I have come to realize that it goes down the freeway alright, but my heavier 720 with an SD25 turbocharged engine with 330 gears has more torque, it may not go any faster than the lighter 521, but it gets up to speed much faster, I am waiting to see how my fuel consumption is(better/worse?).
Never use any 5 speed transmission made before 1980, the gearing is wrong for the diesel engine unless you are using big tires.
I drove SD22 powered trucks for years before finding my SD25 engines, they did alright, but I don't ever want to go back, the SD22 just doesn't have the power I want.
If you don't mind driving down the freeway at 55/60, then the SD22 engine will likely work for you, but if you try to go 70mph your mileage will go from 35mpg to less than 25mpg in a 2wd, I don't know about a 4wd.
The front 3rd member on a 4wd truck is right under the engine, it has a strange oilpan, some of the oilpan is not even under the engine anymore, it's off to the side(see photos). 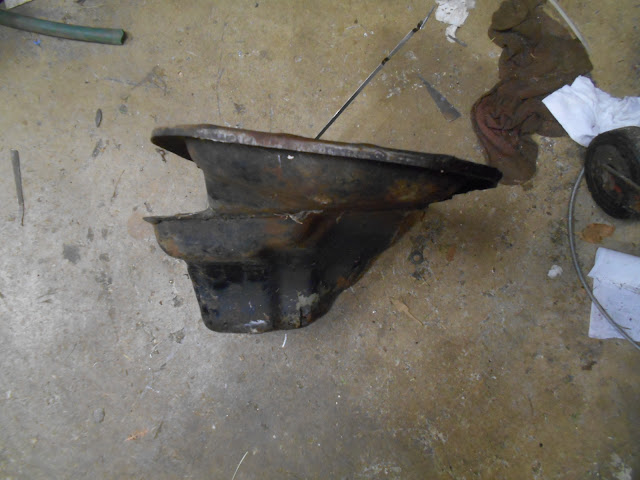 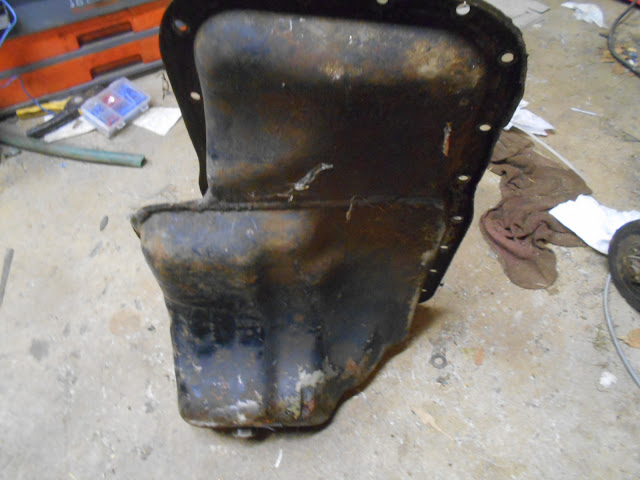 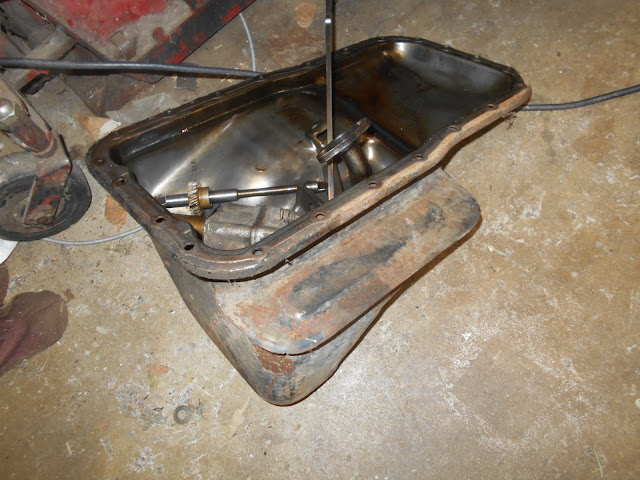 Where are you located?

Daniel Conkel wrote:Of course we didn't get the diesel 4x4s; don't want anything to threaten gasoline. I don't want to build a big rig with big wheels. I just want to swap the engine and keep the 4x4 stock. Is the diesel total weak sauce? Can one not solve the slowness problem by using a different tranny and regearing the differentials? Is the custom oil pan necessity due to axle clearance?

I live in SLC, UT. So an SD25 is a bigger Datsun diesel? The pre-1980 manual tranny is no good. Is there a post-1980 manual that is compatible or would I have to run an auto tranny?
Top

Daniel Conkel wrote:I live in SLC, UT. You weren't kidding; that is a WEIRD oil pan. It looks rigged up. Is that the one you modified? So an SD25 is a larger displacement Datsun diesel? The pre-1980 manual tranny is no good. Is there a post-1980 manual that is compatible or would I have to run an auto tranny?

Daniel Conkel wrote:I live in SLC, UT. So an SD25 is a bigger Datsun diesel? The pre-1980 manual tranny is no good. Is there a post-1980 manual that is compatible or would I have to run an auto tranny?


You need to get the transmission with the engine, the diesels have a unique transmission bolt pattern, the starter is on the left side(driverside in the USA), the only vehicle sharing this pattern is the Datsun roadster.
In my opinion one needs a running diesel 720 truck to start with, as you need the engine, transmission, wiring harness and all the diesel specific electronic devises, you can likely on a budget get it going with the engine/transmission, but you have to take short cuts that in theory make it easy to steal if one knows what they are doing, they are not anything like a Dodge or Ford diesel, and you have to disconnect the injection pump controller if you don't have the wiring harness to control it if you have the inline injection pump.
there is a lot involved in any conversion, one thing about the diesel engine is that the engine mounts are farther forward than the gas engines.
The SD25 is just a slightly larger SD22 with a few small differences, they are a lot harder to find, at least they are in the pacific northwest.
Top

I did a motor swap from a z24 to a sd22 and I am having trouble with the oil pan because it's 4 wheel drive. Does the oil pan have to be customed or welded? Or is there someone I can order one and if so what and where are they. This is my last step to getting the truck done and I'm just leaking oil just as quick as I put it in
Top
Post Reply
8 posts • Page 1 of 1